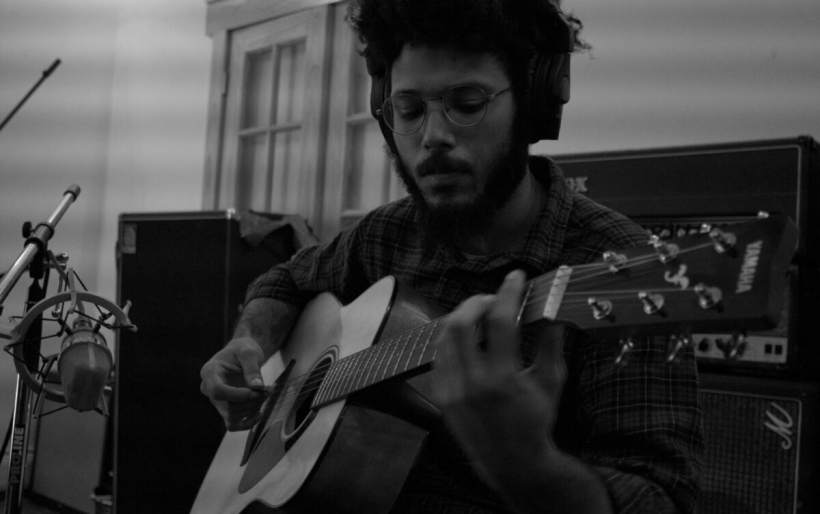 While Philly’s Dante Robinson can be heard contributing vocals and lead guitar in the four-piece indie rock band Vague Advice, the singer-songwriter blends that level of urgency with the stripped-back sounds of acoustic contemplation in his solo work. His latest single, “Cosmonaut,” comes as a first installment off of his upcoming EP on a hotel bed you paid for.

The track takes an Americana-folk form while pulling on Vague Advice’s early elements of early-2000s emo and alternative. Robinson’s voice is not just adaptable to genres — it sounds equally strong set to soft folk sounds as fervent rock accompaniment — but it’s adaptable to emotion as well. “Cosmonaut” features moments of brief, deadpan vocals followed by earnest notes that break free. The raw beauty of his voice is enhanced by the backing from It’s Lit Family Band, a Philly DIY collective made of members from Vague Advice, Humilitarian, Junonia, and previously City Dressed.

“‘Cosmonaut’ is about missing someone and kind of ruminating and maybe sometimes realizing that you’re not being fair to that person,” Robinson told The Key. He channels the song’s message of realizing it’s wrong to think that maybe someone would still love you if they weren’t okay themselves in its lyrics “I know it’s not your fault / I’m a careless cosmonaut.”

Robinson added, “I think I often write songs about being that person so that I can abstract it and understand it and do my best to never feel that way.”

This theme of how gender is enacted in relationships manifests throughout the EP, exploring common notions about emo and indie music from a lens that seeks to challenge toxic masculinity and misogyny. Robinson elaborated on how this plays out on  “Cosmonaut” and the whole project:

“I think I try to use a lot of songs for this project to identify with moody boys who hurt people — someone who I’ve been — and capture this kind of angst that has always been in emo or indie music. But instead of kind of leaving it there and enabling listeners like I think indie rock has historically done, I try to say at least something that challenges people to think about who they are and how they’re treating others. Which is not to say it’s music just for boys. I think most people have been there and can identify with this sort of feeling, but I do think indie rock has a responsibility to assess its own role in the patriarchy and I guess this is me trying to contribute to that in whatever small way I can.”

Whether in Vague Advice style or solo, Robinson’s sound pulls you in and keeps you there. “Cosmonaut” is available now — listen below — and on a hotel bed you paid for is out November 20.