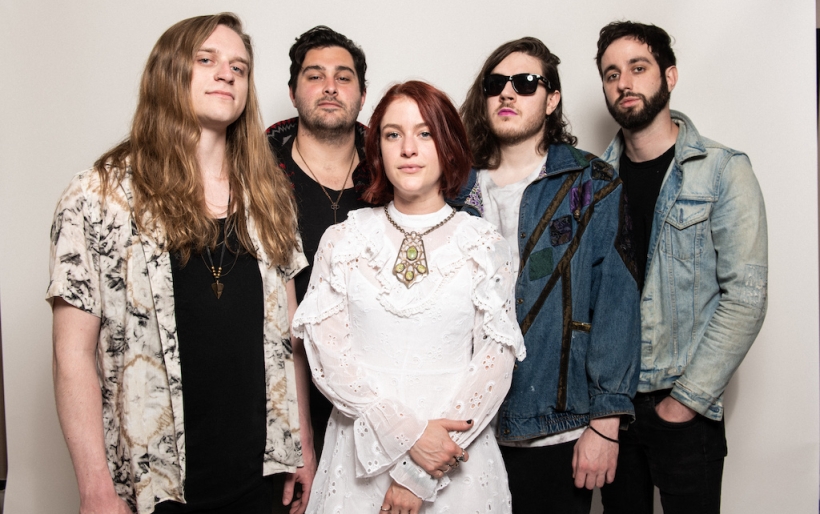 There is beauty in uncertainty, and for Philly’s Honeyjar, that uncertainty lies within the allure of soundscapes that form the mystique of their debut LP Moonbeam.

With glimmering guitar, ethereal vocals, and jangly melodies, Moonbeam speaks to themes like relationships, coming-of-age love lessons, and the mystery within growing up, all delivered in a charming pop-rock sound that glistens with lead vocalist Kayla Rae’s raw and charismatic voice.

The five-piece band gave a track-by-track breakdown of Moonbeam for The Key, delving deeper into the not-so-planned start of the band, the enthusiasm of making the record, and a more in-depth look at how each track came to be. Read their rundown and take a first listen to the album in its entirety below. Honeyjar’s Moonbeam officially hits all streaming services on Friday, December 4th, and you can pre-save the album here.

“Love Me All You Want“

The second I heard this song, I knew it was going to be the single of the record. It’s fun and anthemic and has all the elements of a song you could want. It feels like a summer drive with your windows down kind of song, but the lyrics tell a story that is more reminiscent of a car crash in slow motion. It takes you through the relatable highs and lows of young summer love (or lack thereof) and will get stuck in your head for days. I mean days. I just love the opening guitar, the driving drums, the group chants, and overall Firefly-y vibes, making this song the perfect way to start off the record. – Kayla

“Don’t Fall Out of Love“

This song originally started as most of the songs I write do…intended for Katy Perry. Just a classic pop song with one catchy chord progression and a (hopefully) memorable hook, however, Katy was “unavailable” at the time and all I had was a VERY doinky electronic version of the song I cooked up on my laptop one night, so I brought it to the band to see if we could somehow turn a sugary-sweet pop tune that currently sounded like, at best, head-bobbing video game music into a big, powerful, full band heater. And after messing around on it in the studio one night, Adam and I were able to arrange the keys and guitars and put lyrics to the chorus and it felt way better than anything I could’ve imagined Katy ever doing*. Not soon after, Dylan dropped some absolutely perfect lyrics into our band’s Google drive for the verses and after playing with the key of the song a bit, Kayla ended up finding some really sweet melodies to make this song feel totally unique to Honeyjar. A little magic was thrown in at the very end from Tom (who helped produce and mix the record) and I couldn’t be more hyped with how it turned out. – Eric *Katy PLEASE hit us up to work, you’re the GOAT.

When I played an early version of “Hot Nights” for my dad, he put his hand on my shoulder, gave me this classic knowing smile, and repeated the chorus back to me: “Under the misty pines.” His eyes legit twinkled, and that was all the validation I needed. I think this song is a great encapsulation of Honeyjar, our creative process, and the kind of music we want to make. “Hot Nights” started out as a dinky little song on my acoustic guitar, but as we worked on it and each of us left our mark, it grew and grew into something bigger and more exciting. I love everything about this song and I can’t wait to play this song live again, mostly for my dad. – Dylan

“Moonbeam” was the type of song that just apparates into existence. I remember hearing Dylan’s first demo of the song, which was maybe only the second or third song ever written for the band. It was upbeat, major, light, and airy, but the phrase “Moonbeam” was so dark, mysterious, and powerful. I started hearing this bass line in my head, and then the whole thing hit me like a freight train. I began experimenting with these repetitive patterns to create a sort of hypnotic feel, and through the simple addition and subtraction of instruments, we were able to create the different movements of the song. This was also the first song that Kayla really got to push herself vocally for the band, which is just wild to hear that kind of raw power come so naturally from someone who’s never pushed themselves like that before. That guitar solo is also just one of my favorite moments on the record because it’s pretty unexpected to hear that on a record today, and I just really love guitar solos. It’s one of my favorite pieces I’ve ever been a part of. – Adam

“When I’m Old” actually exists in two forms. There’s a version floating around of just the acoustic guitar and vocal, and we went back and forth for weeks trying to determine which version would make the record. We ultimately decided to go with this arrangement with the synth strings and such because it just felt more unique to us. We sometimes refer to this song as “the wedding song” because it just feels like a song that would be perfect for someone’s first dance at their wedding. I’m really looking forward to seeing cheesy engagement photo montages set to this song in the future. – Adam

This was the song that started it all. Dylan, Adam, and I were all living together in an apartment in Fishtown and were chillin’ one night, watching Fleetwood Mac concert footage from (I’m gonna guess) the late 70s-early 80s, probably boozing and smoking…stuff…, and getting insanely nostalgic for a time we weren’t even alive for. All of us were making music and had of course jammed together for various projects, but had never thought of putting together a defined vision and actually trying to like MAKE IT HAPPEN. I guess it was just the right night for all of us to say “why the f*** not,” we all loved this kind of dreamy, guitar-driven sound that is synonymous with Fleetwood Mac. Dylan was the first one to take the dive with what would become “Mystic Women,” Adam and I were SOLD after hearing Dylan’s first demo, and all of us quickly got to work writing what would eventually become this record, but we needed someone to take the helm. Kayla is one of our best friends that we all (to varying degrees) grew up with and our paths had always kind of stayed parallel, but we had only ever heard her sing recreationally, whether it be from a Snapchat in her car or remembering that she did chorus in high school. But we only had one idea for a song, and we all loved hanging out with her already, so we figured let’s just see if she’d be down to come chill one night and throw some vocals on this song just for kicks…so that happened and yeah, uh, we were all FLOORED at how talented she was and how unique and smokey her voice was, also she had range. Needless to say after that, this band became a HUGE part of all our lives and is something that went from a one-off Fleetwood Mac rip, to a project that I LOVE and can’t wait to share with the world. – Eric

“Waking Up With You“

An early version of “Waking Up With You” was more of a jangly acoustic duet, and I’m pretty stoked it didn’t stay that way. Eric and Adam took it from that original concept, polished it, and changed up some of the chords; now it has some of my favorite basslines on the record. Yes, it’s about being in love, but maybe it’s also about coffee? (Folgers PLEASE hit us up for a sponsorship, we will sell out IMMEDIATELY).  – Dylan

Ah yes, one of the 20 songs on the record with “Love” in the title, it was just one of those summers where all of us had just finished college / moved out of our parent’s places for the first time and were FEELIN it (the love). This song started as a dark, cool highway cruiser ala something Don Henley would’ve put out in the mid-80s, another absolute doinkstar from Eric’s laptop archives that Adam and Dylan took to a completely different level. This is easily one of my favorites to play live, it just plays so smooth and has a bunch of twists and turns including a RIPPER of a keyboard solo that Adam threw in in the eleventh hour (at the time to my chagrin, I thought it would make the song less serious, but what do I know, I’m legit as fake cool as they come and the keyboard solo is now one of my favorite moments on the record that I actively look forward to it every time we play it together). Also watching Kayla improv some runs on this track when we were recording was an amazing thing to witness. There’s also a fully auto-tuned version of this song that exists and needs to be released at some point, robo-pop-country-rock is 100% coming down the pipeline as a genre. Be ready. – Eric

A few years ago, some friends of mine went through really tough breakups, and from an emotional standpoint, the breakups all had this similar rhythm to them. I don’t know if it was something about the age we were at the time, the way some people are nowadays, or just sheer coincidence, but each of those breakups just had this strange confident-yet-confusing quality. “Lighthouse” is sort of an observation of that particular brand of heartache: “Doesn’t mean I don’t love you / It might mean that I still do / There’s a room inside my heart / It’s for you.” What a complicated thing to say to someone, let alone to believe. – Dylan

“Evil” was a real wild card on this record. I had just gone through a break-up and clearly wasn’t feeling very positive about it. I realized that person may not have had my best interest at heart, and literally called the person “Evil” in the song. I don’t actually believe that person is evil, but the messy end of that relationship left a pretty bad taste in my mouth, and this was the healthiest catharsis I could find to get closure on that whole situation. I felt the song needed to reflect those emotions musically as well, with the driving piano, acrobatic vocals, and absolute chaos of the bridge. The music and lyrics really encapsulated the rollercoaster of emotions that came with that relationship. I never envisioned this band having any sort of aggressive edge, but this song expanded the horizons of what we could be capable of both emotionally and sonically in the future. – Adam

When we first started the band, I really didn’t have an idea of what my “sound” was or what I was truly capable of vocally. This record and this song in particular showed me just that and unleashed this awesome inner power I never knew existed. I remember the moment too. We were at the tail end of practice one night and decided to end the song with a double POWERhouse chorus, and everyone would cut out on the word “wait” except for me. I will never forget the chills I had and the look on everyone’s faces after the song ended, and that feeling hasn’t left since. – Kayla