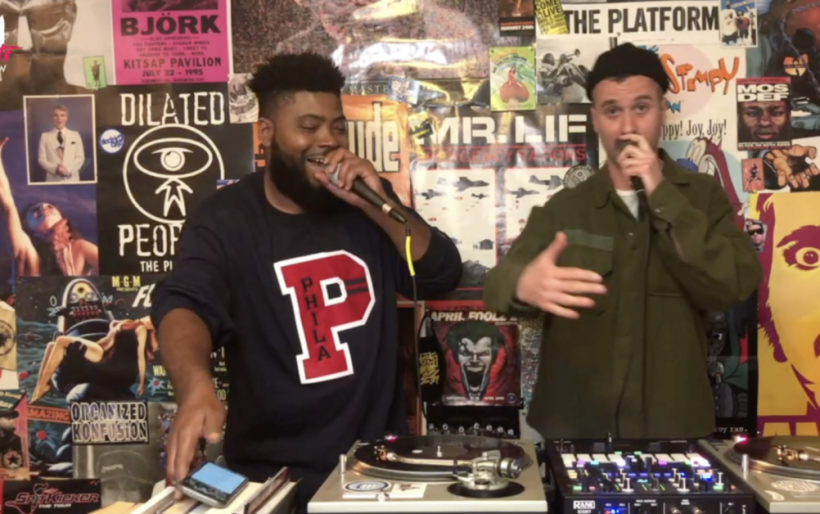 Reef the Lost Cauze and Caliph-Now | still from video

Long-running Philly rapper Reef the Lost Cauze released his latest project, The Airing of Grievances, on Friday. Produced by his good friend Haj of Dumhi, the record offers seven bold new tracks matching Reef’s razor-sharp wordplay with vivid crate-digging beats, and the CD edition collects another half-dozen tracks from the rapper and producer’s twelve years of collaboration, going back to the Yoga At Home project from 2008.

The record is a massive amount of fun and high energy, and to celebrate, Reef and his longtime DJ Caliph-Now took to Twitch on Friday night for a livestream release party like no other. Here are eight magnificent moments from the show, which you can watch in full below.

A new livestream format is introduced — 17:20

After opening with the killer DJ Skipmode collab “Revelations” from the new EP, Reef and Caliph-Now flip the video to present Conway the Machine’s “Lemon” featuring Method Man, which Reef says is the best Method verse he’s heard in years. This was the format of the show that unfolded: Reef’s songs were mixed with current and classic music videos, with Reef and Caliph providing commentary over top. Reef later shared a text he received from Philly quizmaster Johnny Goodtimes, likening it to Yo! MTV Raps with Ed Lover and Dr. Dre — I’d definitely add that an element of Beavis and Butthead creeped in as the hosts’ shrooms kicked in. Johnny Goodtimes takeaway, though, was something everybody in the chat would probably agree with: “I think you guys have a formula for something really, really cool.”

Reef got a verse and a chorus into “Back At It” from his fourth LP, 2008’s A Vicious Cycle, when he had a moment of self reflection upon reaching the lyric “I got a girl that loves me, a girl that don’t respect me / my Black girl Shameika, my white girl Becky.” Shaking his head, he says “Damn, that was fucked up, I should have never wrote that, why did i write it? Terrible thing to say.” As he and Caliph-Now talk it out, he reflects on listening back on things you said when you were younger, and reconsidering their impact from an older/wiser perspective. “That ‘s what growing is about,” Reef says. “In 2020, we’re checking ourselves.”

Shoutout to the GOAT Black Thought / hot takes on The Roots – 45:17

As the screen bounced between vintage footage of The Roots, as well as clips of their frontman Black Thought’s dramatic “Thought vs. Everybody” video, Reef shouts out one of his inspirations. “People be like ‘you’re the best in Philly,’ and I’m like ‘Never!’ I will always tip my hat to Mr. Trotter. He’s the GOAT in Philly, and he’s inspired so many of us.” At the same time, he offered hot takes on The Roots empire, something he’s never been shy about in the past, and when the comments lit up, he reasoned “I can walk and chew gum at the same time!”

A memorable scene from The Wire leads into a song it inspired – 50:14

The lead single on The Airing of Grievances, “Brother Mouzone,” takes its name from Michael Potts’ suit-clad character on HBO’s The Wire, and an intense clip of his first encounter with Melvin “Cheese” Wagstaff led right into a performance of the song, backed by its film noir-esque music video.

When Reef stepped away for a moment at the top of the hour and told Caliph-Now “do what you gotta do,” the DJ / VJ slipped on a truly bizarre music video by Atlanta-based rapper / DJ / chef Dillon, under his Lobsterdamus persona. The song, “Ride With Lobsterdamus,” infuses a psychedelic beat with crustacean-centric double-entendres, and paired with comically lo-budget underwater music video, it became a running joke in the chat for the rest of the night.

Reef’s late-2018 full-length The Majestic is a masterpiece, and he waits an hour into the show to work it into the setlist — the harpsichord laden banger “Giacana” — and it leads us into a half hour run of straight fire, continued by the incredible Dumhi-produced “Philly Cousins”; the second song of the night with an Ethel Cee feature, and she was super active in the chat, prompting Caliph-Now and Reef to talk about the demand for an Ethel Cee comback.

“Massive Your High” inspires a story about Amsterdam -1:27:08

A clip of Reef’s “Massive Your High” video reminds him that they shot the footage in Amsterdam not long after his good friend Viro the Virus passed away. This prompts Reef and Caliph-Now to remember the justaposition of Viro’s funeral, to hopping immediately on a plane to Amsterdam, and receiving a giant bag of weed from the promoter upon arrival. It’s equal parts touching, and comic, and slides nicely into Prince’s “Kiss,” a song Reef says Viro would have loved to hear.

All night long, folks in the chat had been asking for Caliph-Now to rap — except for his brother, who was strongly discouraging it — but when the show goes into overtime at the two-hour mark, Reef convinces him to briefly go off the dome. Considering the amount of champagne, shots, and Pabst consumed up to that point, it goes as well as can be expected, and the two friends stayed on Twitch for another half hour rocking some of their favorite music videos, from Bo$$ to Onyx to Pharoahe Monch.

Watch the release party in full below, and grab a download or order a CD of The Airing of Grievances over at Bandcamp … possibly in a couple days, when it’s once again Bandcamp Friday and the streaming site turns over its revenue share to the artists.