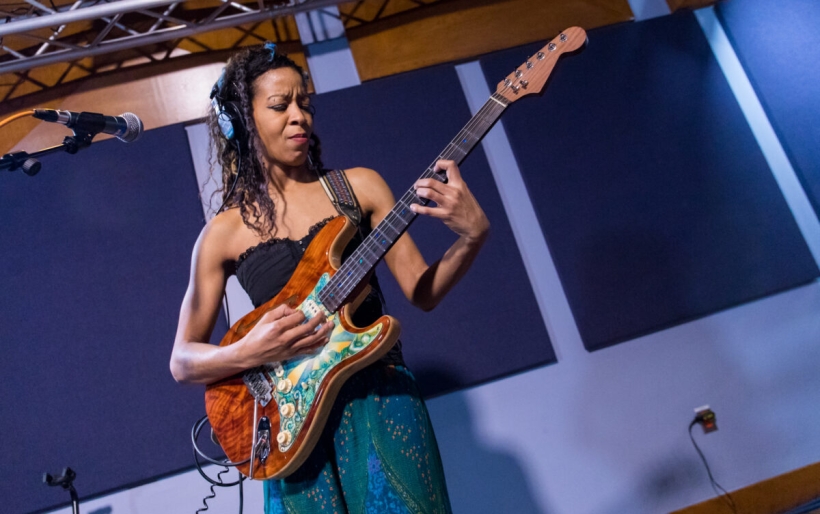 Cutting her teeth in the vibrant and varied musical village of West Philadelphia, Naeemah Maddox has an eclectic style by nature. I first saw her playing flute, violin, and guitar in the aughties Philadelphia psychedelic folk ensemble Yellow Humphrey; a few years later, she shifted to charismatic funk and rock in singer-songwriter Rosemary FiKi’s band.

Based in Brooklyn these days, Maddox’s music has taken a daring experimental turn on releases like her 2017 album Vile Tyrant And The Middle Men, and this year’s raging antiracist collab with metal heavyweights Morton Gaster Papadopoulos, “The Burnt Offerings.” And though her sound tracks as prog on the surface, there’s more to it than that.

As she told our John Morrison in a 2017 interview, “I’m not particularly well versed in prog-rock but I’ve always been drawn to elaborate arrangements. And these range from classical pieces I’ve played in school orchestras. Also, I have an affinity for some musical theater and I think that is really big influence for me as a songwriter. As far as the harmonies I use — I believe it is directly influenced by the rich harmonies I heard in R&B / Motown songs growing up. Stevie Wonder, Michael Jackson, Diana Ross, Anita Baker and later groups like Mint Condition, SWV, Tevin Campbell, Whitney, old  Mariah Carey,  Tony! Toni! Tone!… The harmonies are just so rich in that music….and I feel that I never got bored.”

This March, just weeks before lockdown, Maddox and her band — fellow Philly native Matt Hollenberg on baritone guitar, Jesse Greenberg on keys, Kolby Koczanowski on drums — took a trip to Philadelphia for a performance at WXPN studios that ran the gamut from poppy hooks to propulsive noise, and introduced two new songs into her repertoire, beginning with “The Boy.”

The song races to a danceable beat and nimble arpeggio harmonies, then breaks down into a crushing haze of freeform improv. In an unexpected and unintentional way, the song’s rush and fog and rush again mirror the first six turbulent months of the year. In the set, we also hear the breezy new expanse “How Many Times,” which shines with moments of jazz-tinged elegance, as well as two cuts from Vile Tyrant, “Thread” and “Bright Eyes.”

Listen to Maddox and her band’s performance below, find out more at her website, and keep an eye on her Bandcamp page, since she’ll be releasing new music there tomorrow, just in time for Bandcamp Friday.