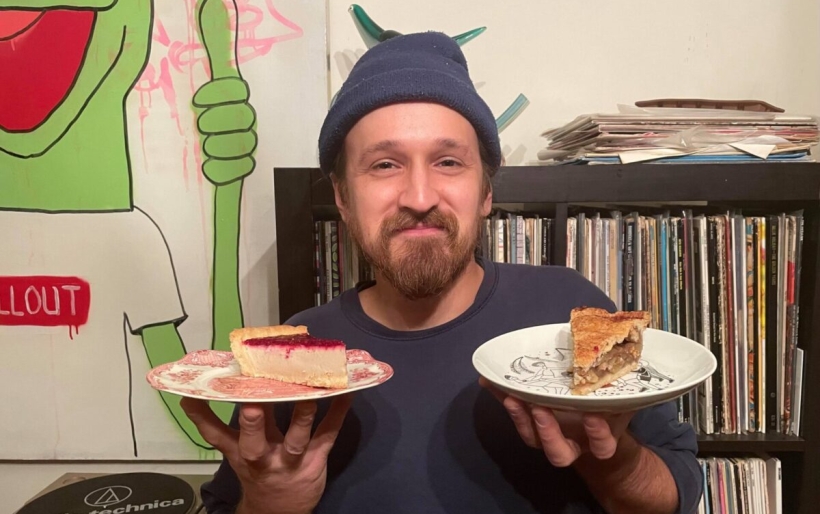 When the pandemic first hit many months ago, quarantine was being pushed as this almost-innocent excuse to get your life together. You remember that, right? Time to clean and organize everything, learn how to play guitar, maybe start a podcast, get really into baking. Chris Baglivo definitely took that last one to heart.

You might know Baglivo as the guitarist of The Superweaks, the indierock group made up of him, Evan Bernard, Mike Bell, Mikey Tashjian, and Andrew Wilson, or from any of his other bands over the years. He’s also a noted audio engineer who has worked on some of your favorite Philadelphia releases including stuff from Nah, Mannequin Pussy, Soul Glo, and Spirit of the Beehive. We interviewed Baglivo back in June about the band and their latest release Teenage Blob, which was a tie-in with a video game of the same name. You can read that here.

While the world has gone down the drain, Baglivo has found comfort in baking, specifically in pies. “Before quarantine, I was a mild hobbyist at best,” he told The Key. “I had made two pies for the Thanksgiving before the Coronavirus had reached our shores, and a couple years before that I had made some vegan beignets I was really proud of.” These days, however, his pies – which should be noted are vegan, as Baglivo has been since he was a teenager – are not amateurish in the least.

Baglivo said that one of the things that draws him to baking is how hands-on it is. “There’s this very physical, connected element to making a traditional butter crust,” he explained. That’s when you work your fat into the flour with very little liquid, creating a flaky crust that’s perfect for pies.

He credited the book Vegan Pie in the Sky by the folks from the revered blog Post Punk Kitchen for kick-starting the baking spree he’s been on all year. He also said he was a huge fan of the Great British Baking Show series, despite the fact that they rarely do anything vegan. He told The Key that he’s been baking at least one pie, maybe more, every couple weeks. “It’s definitely my solace now; it’s a cathartic thing every time I make a pie,” he said.

For Baglivo, baking is a lot like skateboarding, another hobby that he’s gotten more into during the pandemic. “I never made a career out of either of them, but they’re both things that are very much about process,” he told The Key. While music-making is both something that comes easy after almost two decades of doing it but can also be quite frustrating, baking is “very much about these immediate results coming from immediate work, and there’s something very satisfying about that” he said.

“There’s some days you’re working on a song and you understand everything mechanically but it just doesn’t feel right,” he added. “But with a pie, even if it’s not your best pie, at the end of the process you have a pie. … Especially in these, let’s say, uncertain times, it’s nice to have that sort of certainty.”

Asked what advice he had for beginning bakers, Baglivo said, “Start slow and just find something that you want to eat, that is just going to be rewarding. I have a tendency in most things that I do to go for the most difficult thing right away because I want it. But when you just learn those basic skills and you find satisfaction in them it’s very easy to stack new elements on top of it.”

As for what kind of pie is easiest, he suggested a basic fruit pie. “As long as you have the basics of the crust – which is usually a butter crust and you don’t have to mess with it too much – you just pour a bunch of fruit and sugar into it and it works out great,” he explained.

While vegan baking might seem complicated due to the basic fact that eggs and dairy are very much the building blocks of traditional cakes and pies, Baglivo told The Key that he enjoys the challenge. “That’s one of the most satisfying elements of it,” he said. It’s not just determining what ingredients to use instead but also figuring out how that might affect the baking process.

In the recipe for a vegan eggnog pie attached to this article, Baglivo calls for agar — or carrageenan powder — as a substitute for gelatin. Those are types of thickening agents derived from algae that are used in both the pie itself as well as in the gelled raspberry topping.

Although he graduated with a degree in music industry from Drexel, he originally intended to go to school for engineering and still views the world in a very science-forward kind of way. “I’m a physics person, 100 percent,” he exclaimed. That trait has almost certainly been useful when it comes to music and is definitely something that has helped him become a better baker.

Much of what Baglivo bakes ends up in the mouths of his roommates. One of them, the aforementioned bandmate Evan Bernard, has been making hot sauces for a couple of years under the name Weaksauce. No word yet on any collaborations.

At the end of the day, while baking isn’t going to pay the bills – right now that’s mostly freelance audio mixing and related work – it has provided him a much-needed boost during the past few months of quarantine. When the pandemic started and his entire professional and personal life came grounding to a halt, he said it felt like he was in a “moment of free fall.” No shows to play, no bands to record, nothing. “Everything I had that defined myself externally is no longer there,” he told The Key. “What now?”

Everyone has been asking that exact question again and again since March, especially as restrictions became tighter and we’ve had even less contact with our friends, our families, and our communities. The answer for Baglivo is making pies and going to the skate park and figuring out new tricks. Sure, it might not change the world but it really doesn’t have to. So he bakes, he does his job for the countless bands who have come to him to mix their albums, and he goes skating. We all need a reason to keep going as we wait for the world to get back to normal. He’s found his.

Or as he put it: “If I can go to the skate park and try and land a hard flip for three hours and get a pie at the end? That’s a good day.”

We asked Chris what he’s been listening to while baking and he gave us a Spotify playlist full of absolute bangers. “One of my major go-tos is Carly Rae Jepsen’s Emotion, even though that record came out five years ago. It just feels great, and ‘Boy Problems’ is the best song anyone’s ever written in pop music,” he told The Key. “I love that song.” He also sung the praises of Young Americans by David Bowie, calling it a “weird feel-good record.”

When it’s not music, he said, it’s podcasts. He’s decided to make his own – that’s the second most popular quarantine hobby after baking, right? – with the help of fellow Superweak Evan Bernard. The Superweaks Supercast will be debuting January 1st. Check their social media (@TheSuperweaks) for more information.

Chris was nice enough to pass along his recipe for a vegan eggnog cheesecake tart. It might look like a lot but he assures us that it was not that difficult and is totally, totally worth it. Also, if you don’t want to commit to a pie, Chris says the shortbread tart shell recipe makes for excellent shortbread cookies. It’s December, and therefore prime baking weather so what are you waiting for? Turn up that playlist and go bake!

Sift together the flour, sugar, and salt in a large mixing bowl. Break the margarine into approximately tablespoon sized pieces. Cut the margarine into the flour with a pastry cutter, or in lieu of that just use your fingers. Mix until the dough comes together in a consistent texture.

If you’re making the crust firmly press it into the pie pan starting with the sides. Press in the bottom of the pan after the sides are complete. Use a fork to pierce the bottom and the sides of the crust at even intervals at least 25 times (I usually do them two inches or so apart). Freeze the crust for 45 minutes.

Preheat the oven to 350°F. Bake for 10 minutes, then rotate the crust so it bakes evenly and continue to bake for another 15 minutes or until golden brown. Let crust completely cool before filling.

2½ tsp Brown Rum (or your choice of egg-nog mixer)

Start by placing the soaked cashews, rum, lemon juice, vanilla extract, nutmeg, and salt in the blender (we’ll come back to this later).

In a large saucepan over medium-high heat, combine ½ cup of the vegan egg-nog with the agar or carrageenan powder, bring to a simmer, and cook for 6 minutes stirring occasionally. In a separate bowl whisk together the remaining nog and cornstarch drizzle it into the saucepan, and cook for 4-5 minutes, stirring constantly with a wire whisk, until it thickens and no longer tastes starchy.

Now add the sugar and coconut oil and whisk until smooth, then immediately pour it into the blender along with the other ingredients. Blend until smooth. Depending on your blender this could be 2-3 minutes, but mine is junk so it took a bit longer. Immediately pour the mixture into the prepared tart shell and let stand at room temperature for 30 minutes.

Prepare the topping in the final minutes of the cheesecake cooling. In a small saucepan combine the thawed raspberries, sugar, agar/carrageenan powder, cornstarch, and lemon juice. Bring the mixture to a simmer over medium heat and cook for 4-6 minutes, stirring occasionally until thickened to the consistency of melted jam. Spoon the mixture onto the cake, working from the center and spreading it to the edges. Let the cake cool for 10 minutes, then move it to the fridge to complete cooling, at least 3 hours. I left it in my fridge overnight and the texture came out perfectly. To serve, slice the cake with a thin, sharp knife.