WXPN Best of 2020: Highlights from the NPR Music Tiny Desk (and beyond) - WXPN 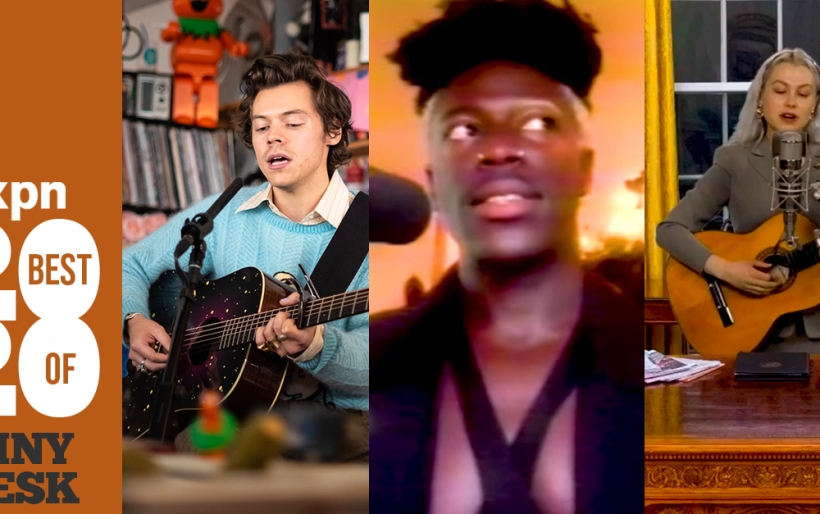 WXPN Best of 2020: Highlights from the NPR Music Tiny Desk (and beyond)

As the year winds down, we’re continuing our look back at the music of these past twelve months with an ongoing series of XPN Best of 2020 deep dives. Today, The Key’s Regina Schliep shares some of the most memorable moments from NPR Music’s pivot-to-home Tiny Desk Concert series.

While some musicians made it to The Tiny Desk’s usual setup before COVID prompted the start of Tiny Desk (Home) Concerts, many welcomed fans into their homes this past year for unique live sets. The variety of performances brought by the beloved NPR series provided great relief and a break from the chaos of our current world, bringing live music to our homes when we’ve had to go without it. Although the classic desk setup packed with music memorabilia was missed, many musicians found creative ways to channel their artistry through the opportunity to play their sets from home. Check out some of my favorite moments from performances this year at NPR’s Tiny Desk.

Harry Styles’ sophomore album Fine Line is undeniably a pop record for a reason. It has a handful of standout tracks that boast compelling production, but some the biggest criticisms it’s recieved come from the lyrical step back from his debut self titled and a lack of cohesiveness with its variety of sounds. Polarized reception aside, Styles’ Tiny Desk appearance gave a new taste on the record with an acoustic set of some of its most adored tracks. Styles alone has a gorgeous and raw voice, but his live band of Mitch Rowland (guitarist), Sarah Jones (drummer), Adam Prendergast (bassist), Ny Oh (guitarist) and Charlotte Clark (pianist) adds a whole other layer of talent and quality to the performance. The opening song “Cherry” is captivating with its beautiful a capella bits that bring out the clarity and warmth of all the voices and instruments, making the space even more intimate than Tiny Desk’s already are, with added humor from Styles’ cheerful personality.

Performed live from London, Dua Lipa’s Album-of-The-Year-Nominated Future Nostalgia was completely stunning in her Tiny Desk appearance. The orange color palette of her Tiny Desk space sets the scene for a charismatic performance accompanied by a group of background vocalists that perfectly resonate with Lipa’s raspy timbre and skilled guitarists that elevate the sound. Through and through, each track was beautifully adapted for a live set, but the stripped-down version of “Love Again” stood out and duly so as Dua explains it to be “a song that I really love, it’s one of my favorites on the record and it’s really about manifesting good things into your life when things aren’t quite going your way.” Every performer is a sparkling contribution and the chemistry among them all makes it seem genuine and enjoyable.

Phoebe Bridgers – “I Know The End”

At her most recent appearance at the Tiny Desk, Phoebe Bridgers hoped that “everyone’s enjoying their apocalypse.” With her and her band dressed in presidential attire in front of an oval office green screen, her thrilling 2020 record Punisher makes her the only president you’ll ever need for an apocalypse. The record’s dystopic closer “I Know The End” received unique treatment in her set, with its beginning following the acoustic set style until they traded off for electric instruments to close out the track in a chaotic surrealness.

Singer-songwriter Nilüfer Yanya’s 2019 full-length Miss Universe is an incredible display of Yanya’s dynamic and unique voice amongst captivating production. Her live set showcases her talented guitar playing in an intimate form, and her vocals seem to come from deep within on every word. Despite the studio version’s instrumental arrangement being a significant part of the track, Yanya’s Tiny Desk performance of “Heat Rises” is addicting in the best way, showing that her mere presence and guitar more than makes up for everything left behind in the stripped back set.

If you’ve never had even the slightest desire to be a HAIM sister, their new era of Women in Music pt. III should make you feel otherwise, with a number of Grammy nominations and a new landscape that maintains their edge yet levels it up across the board. “I Know Alone” carried a different meaning this year, as its lyrics “I know alone like no one else does” channel the isolation during these times, and even indicative with the split-screen performance of the sister-trio. The live rendition of the track hones in on the intoxicating synths and garagey glitch-pop beat, and there is something so whimsical about the  break towards the end that leads into the outro’s hushed “I know alone’s.” HAIM has never sounded more like HAIM, and the whole set digs into the standout elements of each track, like the groovy bass in “The Steps” and the euphoric sax and synths in “Summer Girl.”

“I hope it moves you in some way” West Londoner Arlo Parks says before she starts “Black Dog.” it seems like an impossible feat to not be moved by her transcendent vocals that narrate breathtaking poetic lyrics. Park’s explains that “Black Dog” is a touching response to a friend who was going through a hard time. The simplicity of lyrics like “Let’s go to the corner store and get some fruit” show that it can be the little things, as well as seeing a more complex side to internal struggles and coming from a place of understanding, “I know that you are trying, and that’s what makes it so terrifying.” She has such a clear, calming voice that speaks to an intelligent mind and beautiful heart through her words that feel like they come straight from the pages of her diary.

Moses Sumney’s “Me in 20 Years” recently appeared in the HBO hit show Euphoria in a special installment bridge episode to hold audiences over as its production came to a halt due to COVID-19. Among many of the show’s celebrated qualities, its soundtrack plays a special role and seems to always convey the visual emotions and scenery in the most pointed manner. The piercingly clear voice of Sumney has an angelic tone that compares to very few, and like its appearance on the show, his live rendition channeled immense floods of emotion with a special duality of sadness and melody. Sumney’s Tiny Desk is just another example of the benefit of its home edition offering artists more creative freedom, as the performance’s aesthetics elevate Sumney’s cathartic energy.

Melanie Faye’s guitar playing skills caught attention from the likes of Maggie Rogers, Hayley Williams and Willow Smith, to name a few, for the mesmerizing talent in videos posted to her social media. As if her skill with the instrument isn’t enough on its own, Faye’s vocals superbly pair with her guitar, as if they’re both lead vocals. Her live track “It’s A Moot Point” is so fascinating that it becomes difficult to choose a focal point of the performance.

The Lumineers appeared in person at NPR shortly before the pandemic and watching their set has only become more emotional because. Headed by Wesley Shultz, The Lumineers fill the space with so much energy and fullness as they seem to be enjoying every second of their appearance. Every band member boasts an incredible amount of talent, like Jeremiah Fraites and his barefoot piano playing being nothing short of a thrill. Before they close out their set, Shultz asks the audience to sing along, “I always imagine music was like church without God; where it was a congregation of people, and people singing together, there’s something eternal about that. So if you want to help us sing, we’d greatly appreciate that.” The joined voices of the audience belting “keep your head up, my love” is heartwrenching and a beautiful sight of what we’ve been missing for much of this year.