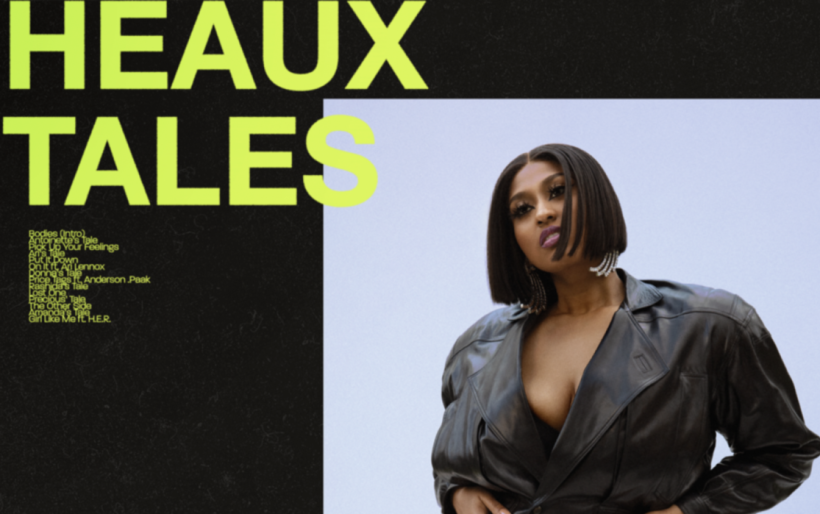 It’s always great to have new music from Jazmine Sullivan. We last heard a full project from the North Philly songbird after the release of her third album, Reality Show, in 2015. Since then, there has been a wave of new talented women who have made their way into to a plethora of hearts and playlists – Ari Lennox, Ravyn Lenae, and Tiana Major9 to name a few. As great as they are, many of them grew up on Jazmine Sullivan’s music, and revere her soulful voice and powerful pen game.

On her new project Heaux Tales, Sullivan takes her songwriting to a new level, crafting a sort of musical documentary as she uses a series of songs and interviews to explore a controversial question: “What makes a woman a ho?”

During her interview with The Breakfast Club, Sullivan said she didn’t agree with how society uses the word to degrade women and to control how they think, act, and behave. Pussy is power and Sullivan has always been inspired by women who stand in their power. Take for instance hip-hop star Cardi B, who is open about the time she spent working as a stripper and doesn’t allow anyone to use it to shame her. Throughout Heaux Tales, Sullivan tackles the ideas of sexuality and empowerment from the perspective of Black women, and with the assistance of friends, family and peers, she does a damn good job at executing the outcome.

The EP is well put together with amazing songs, dialogue and dope production — some of the names who worked on it include Key Wayne, DZL, Cardiak, Kevin “Wu10” Wooten, Jarius “JMO” Mozee, Dev Hynes, Dave “Pop” Watson, Dilemma, Joe Logic, Gee, and Uforo “Bongo ByTheWay” Ebong. Like her past albums, Sullivan isn’t dictating how listeners should feel. She’s more about putting stories out there and letting folks respond how they respond, gaining their own perspective in the process. In that sense, Heaux Tales is a creative conversation-starter that gives you food for thought, then makes you do the dishes.

Heaux Tales is a 14-track EP, and six of those tracks are conversations with different Black women about either the viewpoints on being labeled a ho, or their thoughts the feelings and behaviors of someone who’s considered a ho. It reminded me of when Jay-Z dropped his last album, 4:44, and released videos of his friends and peers talking about the topics of the songs on the album. Each tale leads into the song — except the opening “Bodies (Intro),” where Sullivan sets the scene by reminiscing about the multiple decisions that she’s made between having a couple of drinks on a night out and a state of confusion the morning after.

The album starts off with the feeling of doubt, questioning if maybe she’s doing too much or what her hometown would describe as “drawlin.”  That leads to the first story, “Antoinette’s Tale,” where the speaker believes that the reason women are called hoes is because society can’t handle that they too are sexual beings who want to take the same liberties that men do. It’s a perfect way to introduce the next song, “Pick Up Your Feelings,” where Sullivan harmonizes instructions for men to gather their fragile egos if can’t handle women who assert their sexuality. However, the next tale reflects that even when a woman stands in her power, sometimes they are met with challenges.

“Ari’s Tale” tells a story of how soul singer Ari Lennox was willing to risk her career and even her dignity for one particular man and his ability to snatch her soul. The next two songs show honesty in women who are sexually liberated; they depict how, like men, unforgettable sex can make them do impulsive things. Sullivan reflects on her experiences with this on “Put It Down,” then afterwards she and Ari join together on the sixth track “On It,” singing lustful praises of what they’re willing to do but also demanding their partner prove that they deserve it.

During “Donna’s Tale,” we hear women talk about how they trick on men — whether they are married, in a relationship, or single — because sometimes you got to use what you got to get what you want. The song “Pricetags” expands on this, with Sullivan’s melodies unpacking costs (financial and emotional) alongside bars from Anderson. Paak.

Does cheating make a woman a ho? On “Rashida’s Tale,” we hear Rashida talks about getting into a relationship with a woman who loved her and treated her very well, but somehow Rashida ended up sleeping with the woman’s best friend. On the following track, “Lost Ones,” Sullivan sings like the king of sorrows about living with the fact she did someone wrong, someone who she loved. To quote Mike Epps on Next Friday, “Playas fuck up too,” and the type of honesty this tale and song show is that hoes do too.

The relationship between the so-called “ho” and playa is the topic for the next tale and song combo. On “Precious’ Tales” you hear Precious talking about how she is only attracted to ambitious men who find multiple ways get it out the mud by any means. On “The Other Side,” Sullivan sings from the perspective of a woman coming from nothing and dreaming of bagging a baller who doesn’t drive X5’s but gives them to the mother of his children. Both tracks talk about aspirations, coming from nothing, growing up with a desire for the finer things in life and not settling for man who lacks the ambition to find a way to obtain such things. However, after dreaming of snatching an ambitious baller, Heaux Tales ends with the reality of sexual power and how it doesn’t always lead to happiness.

According to Amanda, the power of the pussy is a gift and a curse. On “Amanda’s Tale” you hear how, on one hand, it’s empowering to know that she can put Nina Simone-level spells on men with sex that makes them keep coming back. On the other hand, it might be the only reason why they keep coming back to you. It can make a woman question the reward in having the power if it doesn’t come with some type of worth. Sullivan teams up with H.E.R. on “Girl Like Me” and openly sings about how the men they desire tend to go for the fantasy vixens on social media, not women like them. When men do this, this makes them question the men’s motives: if sex is the only thing that they want, then why not just become the hoes that they like? The entire Heaux Tales project is filled with raw, honest feelings and stories evoking all types of emotions, but this level of vulnerability was the chocolate icing on the cake and the perfect way to end this musical documentary.

Simply put Heaux Tales, is an amazing piece of work. Over the course of its rollout, Sullivan received praise about it from legends like Missy Elliott, as well as peers like Solange and Masego. She also might have Issa Rae on board for a short film to go with the EP. 2021 may have started out on a wild note so far, but Jazmine Sullivan’s rich exploration of the label ho provides a melodic relief from the madness.