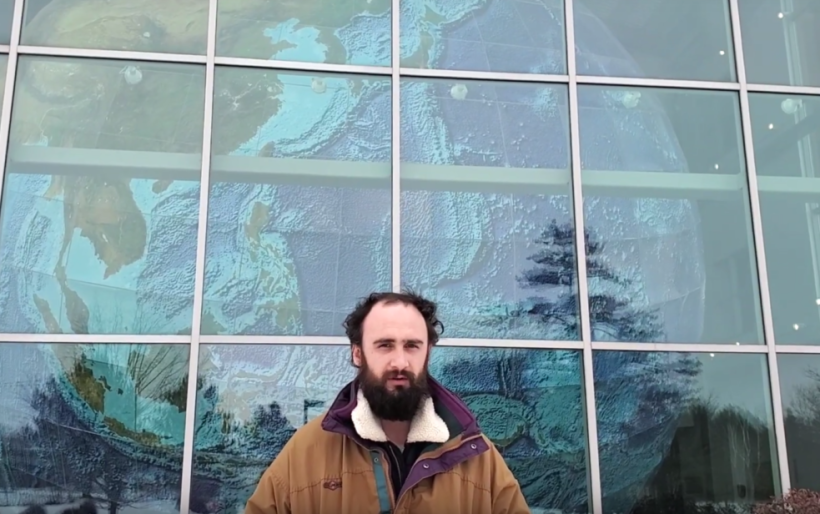 West Philly’s Dan Wriggins has been most identifiable the past several years as the frontperson of Friendship, the plaintive indie ensemble he founded in 2015 with a group of longtime friends from the New England music community.

He’s a solo artist in his own right, too, and recently returned to his hometown of Yarmouth, Maine, to film a naturalistic video for his new solo single “The Diner.”

Co-directed by Adam Wriggins, the video finds the songwriter in a winter coat, wandering snow-covered highways and standing in front of a window, behind which sits Eartha, the world’s largest rotating globe. (It’s inside the headquarters of the DeLorme mapping corporation in Yarmouth, and the video also finds Wriggins walking around the downtown and along the driveway that leads to the crisscrossing of Route 1 and I-295.)

Between the rustic arrangements and warm vocals, the song is inviting call into a realm of wide-open space, and sits nicely alongside Wriggins’ work back in Philly with Friendship. There’s another local tie, as Wriggins tells Brooklyn Vegan, since the song is a homage of sorts to the defunct Philly basement venue All-Night Diner.

The All Night Diner was a basement venue in Philly active around 2016-17 that my friends and I used to hang out at a lot. It was a special place. There was a nice porch and backyard, friendly people, and a lot of great shows. I don’t know whether I “took it for granted” or not. It probably helped me understand that a supportive scene and community doesn’t just happen, and I was lucky to be a part of that one. The song could also be about actual diners. My favorite is Annie’s in Worcester, MA.

The song is available as a digital single via Ordinal Records, and also features “Dent.” Listen and download here, and watch the video below.