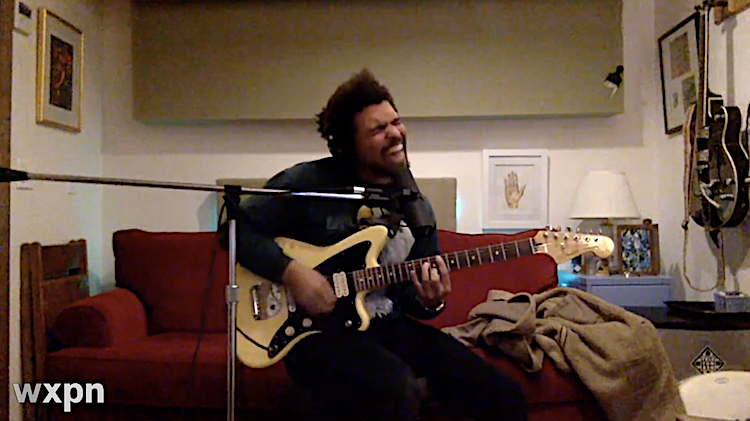 WXPN’s Free at Noon concert-series re-launched on Friday with singer-songwriter Devon Gilfillian playing a livestream show from his home in Nashville. For the set, Gilfillian played new songs written in the past year, favorites from his Grammy-nominated LP Black Hole Rainbow, and a classic from his full-album cover of Marvin Gaye’s What’s Going On.

Beginning on the new “Cracks In the Ceiling,” written with the band Joseph, we find Gilfillian taking a meditative approach on the year of global pandemic: “the world has stopped for a reason, now it’s you and me, there’s nothing in between us.” He followed it with “Unchained,” a Black Hole Rainbow song written about the resilience of his brother Brian, which he compared to the the country as a whole. He called it “an anthem for this year in general: with everything thrown at us, the resilience of this country and its people and making the right decisions, I’m proud of us.”

In the fall, Gilfillian and some Nashville friends covered Marvin Gaye’s What’s Going On in full, and he commented on its continued relevance before playing the title track: “Music just goes in cycles, and this is one of them that really hit me this year.” He went on to play what he called his own attempt at writing a song like “What’s Going On” — the Black Hole Rainbow single “The Good Life,” which is upbeat but comes from a heavy place: “I wrote this after Trump was banning Muslims from the country, he was spitting racist rhetoric about Mexican-Americans and Mexicans coming into the country all this stuff, and I wanted to write a song about how beautiful it is that people come from different countries, different religions, different places in life.”

The set closed on “Freedom,” his recent collaboration with the Virginia band Illiterate Light; listen to an audio stream of the set below, or watch the video webcast in full via NPR Music Live Sessions.