The Skeleton Key: Change is in the air with new music from Palberta and Writhing Squares, a possible use for all those empty venues, and an inauguration party like no other - WXPN 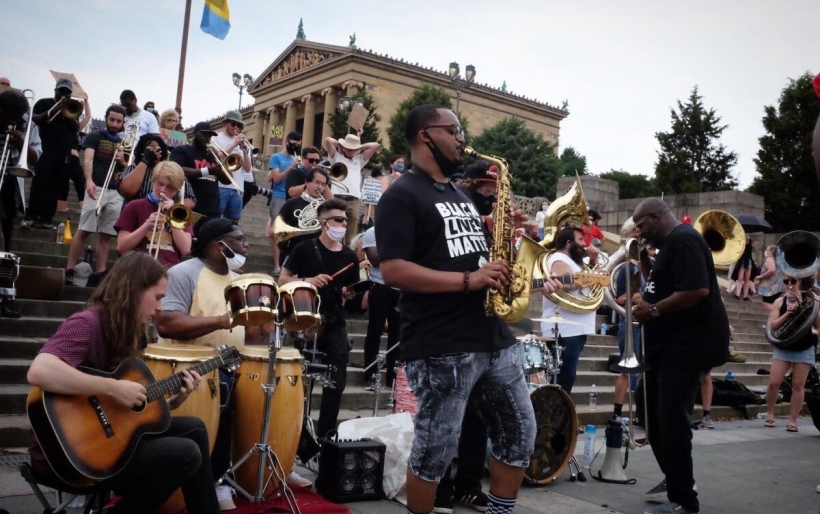 A Clarion Call For Justice | photo by John Vettese

The Skeleton Key: Change is in the air with new music from Palberta and Writhing Squares, a possible use for all those empty venues, and an inauguration party like no other

So back in November we published the election day edition of The Skeleton Key and now just a couple short years later – just kidding, I think it was just two months – here we are at the inauguration. While I can’t say I’m particularly excited about Garth Books, the New Radicals, or even J.Lo, all of whom are performing in DC this afternoon, I’m very happy that in Joe Biden’s home state of Delaware they’re having Jeff Bradshaw & The All Call Band as well as Low Cut Connie play the local party.

You might remember Bradshaw and his big band from “A Clarion Call for Justice,” the series of concerts they played outside the Art Museum and City Hall in the spring and summer supporting the nationwide protests against police brutality. It’s nice to see him and his group get the recognition they so definitely deserve.

I can say the same thing about Low Cut Connie, whose regular online shows have become a veritable panacea for a whole host of people around the country. As noted in the last column, frontman Adam Weiner was even named a “Pandemic Person of the Year” by The New Yorker because of it.

The Delaware rally and concert starts at 2pm and you can watch it online over here.

Another Philadelphian who got in on the inauguration celebration is Japanese Breakfast. Frontperson Michelle Zauner (whose upcoming memoir Crying In H Mart is quickly ascending to bestseller status) was joined by bandmates Deven Craige, Peter Bradley, and Craig Hendrix to perform their song “Everybody Wants To Love You” last night at the AAPI Inaugural Ball. You can watch that below.

Believe it or not, there are a couple other things happening today that deserve your attention, thankfully both of them in the evening. At 8 p.m., Fire Museum Presents is kicking off their 20th anniversary celebration with performances by noisers ZS of Swezlex with Bran (…) Pos, homohop pioneer Juba Kalamka, and avant-garde percussionist Tatsuya Nakatani. You can watch that via the Fire Museum YouTube page.

When that’s over, switch over to the first in Bowerbird’s Liminal States, “a new series of late night, live streamed concerts intended to be listened to as you fall asleep. Aiming to center and calm, the musicians will seek to lead listeners to that magic space between awake and asleep.” Sounds really pleasant, right? Especially after everything that’s been going on in the world recently. Tonight Pianist Marilyn Nonken will be playing Morton Feldman’s “Triadic Memories” at a show co-presented by The Rotunda. As the event suggests: “Tune in and bliss out.”

Speaking of bliss, if you haven’t yet visited the Ars Nova Workshop Milford Graves exhibit at the Institute of Contemporary Art, hurry up because it closes on the 24th. I know I talk about this every column so by now I hope you’ll have taken my advice but just in case you need the reminder: this is one of the coolest, most interesting exhibits that has hit Philly in years.

Also be sure to check out the last few online events organized around the Graves exhibit. On Thursday Rhea Combs, Curator of Film and Photography at the Smithsonian’s National Museum of African American History and Culture, will be in conversation with noted music journalist Greg Tate on the topic of “how Graves’s work is situated within Black aesthetics.”

On Sunday afternoon there’s a discussion about spirituality and Graves’s interest in the healing properties of herbs and then that evening pianist Jason Moran is performing live from the ICA. Finally on the 28th percussionist and composer Susie Ibarra and Living Colour’s Will Calhoun, who when he’s not playing drums in the funk punk band is a music historian who has done extensive research into different traditions around the world, will be speaking about rhythm as a central tenant to Graves’s “philosophy of life.”

Also on Thursday it’s the monthly Warp Factor 9 concert, this time featuring pianist Alex Posmontier performing solo and a duo of saxophonist Elliott Levin and Captain Erica Corbo herself, the curator of the ongoing jazz and classical series and a fabulous piano player and singer. As longtime Skeleton Key readers know by now I’m a huge fan of Warp Factor 9 and I’m especially stoked for this one.

No wave punk legends Bush Tetras are playing a live set Saturday night that will be broadcast via the (Le) Poisson Rouge website. The Philly favorites – there’s even a connection to the city with current bassist Val Opielski, who was a member of Initial Attack and a number of other local bands back in the day – were supposed to play here with The Bongos in March at World Cafe. While that obviously got canceled I was happy to see that WCL is co-presenting this online show alongside the rest of their programming, which currently includes a whole bunch of “house concerts” featuring musicians including Taylor Kelly, Luke Carlos O’Reilly, TJ McGlinchey, and Marielle Kraft. You can find out more on their website.

I’m going to pause the calendar real quick and talk about new music. Actually, let me amend that to new and upcoming music because there really isn’t that much on my radar this time around. Between the political uncertainty and, you know, the ongoing global pandemic, I suspect bands put the brakes on putting out new stuff until at least February and the next Bandcamp Friday.

The new LP from the Philly/NYC three piece finds the band going in an even poppier direction than before. This is a whole collection of ear worms and I am here for it! There are only three tracks up on their Bandcamp now but the rest of the album will be out in a couple days. (Bonus: check out this NPR Music writeup on the band’s latest by Key contributor Sam Kesler.)

This album from the West Philly-via-Orlando super catchy punk band has been a long time coming. The last thing the four piece put out was a split with Chicago’s C.H.E.W. way back in 2017. I can’t even remember 2017! Look for this one to be on a lot of end-of-year lists.

Writhing Squares – Chart For The Solution

What can I say about Writhing Squares that I haven’t said already? The prog/punk/psych duo – Daniel Provenzano plays bass and sings while Kevin Nickles is on sax, flute, and synths – are by far one of the most exciting and interesting bands in Philly. Their last LP, 2019’s Out of the Ether, was absolutely incredible. Based on the one track released so far and the two that came out on a CDR last year this new one, a double LP coming out in March on Trouble In Mind, is going to be even better.

Some of the other albums I’m looking forward to in the new year include stuff from West Philly Orchestra, Soft Torture, Quarantine, 700 Bliss, Birds of Maya, Jupiter Blue, George Korein and the Spleen, The Sweatys, Mesh, and Wail, which is the brothers Papadopoulos of Stinking Lizaveta fame plus famed jazz drummer G. Calvin Weston. What a list! Oh, and I almost forgot Hermit High Priestess, who I had the chance to see play on the roof of LAVA last week as part of the community space’s ongoing fundraiser. Look for the video of that on LAVA’s YouTube soon.

I saw a meme going around a few days ago about how we need to put venues and really the whole music biz in charge of the vaccine roll-out. “Let the live music industry handle vaccines,” it read. “We’ll finish it in one weekend and sell beer, merch and a Dr. Fauci meet & greet.” Funny, sure, but maybe there’s something to it.

The International Alliance of Theatrical Stage Employees certainly seems to think so. That union, which represents stagehands, technicians, and other behind-the-scenes workers around the country – and locally at IATSE 8 – recently suggested that shuttered venues be transformed into vaccination sites. While nothing has been put into play, at least not officially, the local does have access to a ton of very empty, very accessible spaces around the city. Read more about that in this Variety article from a few days ago and also be sure to check out the really interesting tangentially related piece called “On the Future of the Live Music Economy” that I’ve seen pop up a bunch recently.

I have a few more dates to get to before we conclude this column so let’s get to it! On Monday the 25th, The Rotunda and Vision Driven Artists, a Philly-based group whose mission is to “increase resources and opportunities for local artists and arts organizations,” are hosting an online workshop about fundraising. This is something that is always important but feels especially necessary right now with no in-person events.

That Friday the Folksong Society is presenting a concert by country and bluegrass singer Kathy Mattea, a Philadelphia Folk Fest Favorite. This is just one of many shows the PFS is doing this month, including an ongoing series of South Korean artists that looks pretty cool. Check their website for more.

On the last day of the month there are three different events that I’m excited about. At 3 p.m., McRad’s Chuck Treece will be talking about his life in both punk and skateboarding on the New York Hardcore Chronicles Live program. At 7 p.m., there is a massive fundraiser dance party and concert benefiting The Trevor Project and The Marsha P. Johnson Institute that is being co-hosted by DJ Baby Berlin and includes a performance by Plastic Ivy along with a whole slew of other DJs and musicians from around the country. Finally at 10 p.m., it’s the second in the Bowerbird Liminal States series, this one with multi-instrumentalist and producer Jeff Zeigler who just released an album of real heady electronic ambient tunes with Dash Lewis last month that you really should check out.

I want to end this with a really beautiful piece of music by Philadelphia bassist Jamaaladeen Tacuma that he wrote in honor of Martin Luther King Jr. way back in 1989. The Dream Then and Now includes members of the Ebony String Quartet with Lawrence Newton narrating the text and lyrics by Richard Tucker. The whole thing is a perfect mix of funky jazz and stuff that reminds me of Kronos Quartet. As you can imagine, it’s great. The album was recorded for WXPN but never officially released, though Tacuma was kind enough to upload it to his website. You can watch a video of the one and only performance of The Dream Then and Now below:

See you all next month! As always if you want to let me know about anything going on feel free to bug me on Twitter at @talkofthetizzy.