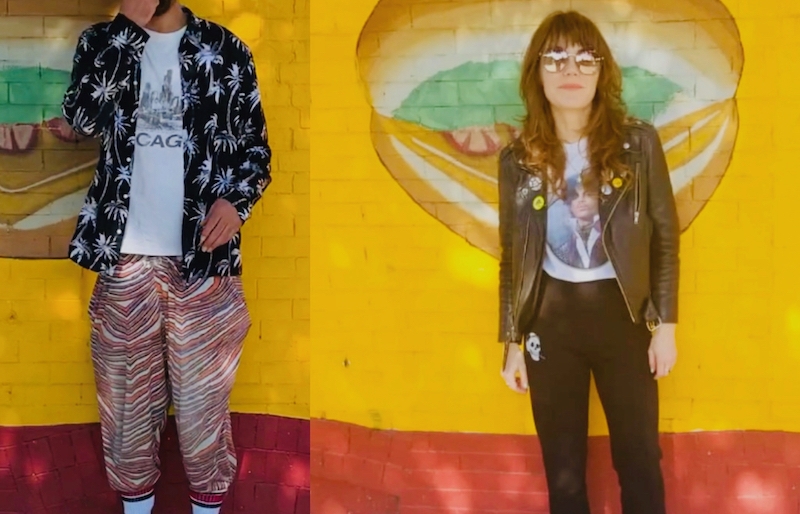 Serengeti and Jenny Lewis | photo courtesy of the artists

Jenny Lewis and Chicago rapper Serengeti (David Cohn) have collaborated on another song together, “Vroom Vroom.” The second of seven songs the pair has recorded so far, it follows last year’s single “Unblu.”

“Vroom Vroom,” which channels 90s style glitch pop, is “about thinning your social group and clearing your mind in unclear times,” according to Lewis, who also directed the song’s iPhone-shot music video. Watch below.

The unlikely duo became friends in 2018, and meant to collaborate on just one song. But when the pandemic hit, and Lewis and Cohn hunkered down in Los Angeles and Chicago, respectively, they had plenty of time to create more.

“The result is five songs made on Jenny’s iPhone, for Dave,” according to a press release. “Beats, bass, drums, digital tanpura & topline, sent via text, ripe for Dave’s poetry. To accompany the music, Jenny made videos on her phone during the witching hours, editing while under the covers.”

“Then Jenny texted the tracks to another People alumnus–Andrew Broder in Minneapolis—who co-produced and mixed the songs, taking them from Garageband phone music to music that gently thumps you. Music to dance around your living room in a Day-Glo bathing suit to. Music to go bananas to while watching the news & Forensic Files on mute.”

Watch the “Vroom Vroom” video below and listen to “Unblu” here.