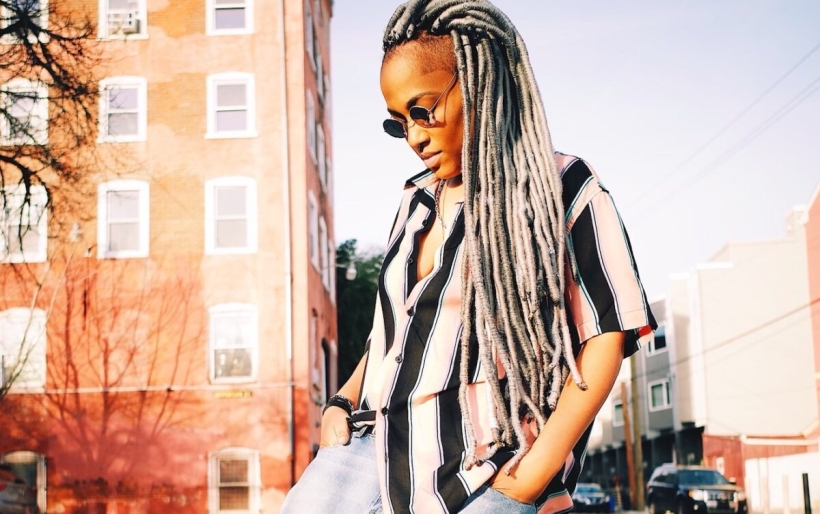 Give Them Their Flowers: Jacqueline Constance talks TLC, The Roots, Sade, and Philly

For Black History Month, we are asking hometown heroes of different genres and artistic practices to reflect on their musical influences — as well as the influences Philly has had on Black music — in a series called Give Them Their Flowers.

We start it off with North Philly’s own Jacqueline Constance, who came through to talk about how TLC’s “Diggin’ On You” was the first song to make her realize she could sing, how a sound loop improv session allowed her to record a legendary cover of two of her favorites — The Roots and Sade — and how she takes pride in the fact that her city is where musicians and artists come to catch a vibe when creating. Listen below and read some highlights from our conversation.

Give Them Their Flowers – Jacqueline Constance on The Roots and Sade

…on her introduction to music as a listener.

I grew up in a Black household, of course, so Sunday mornings, when it was time to clean up the house, there was always something blasting. Some of my first recollections of music were Rufus and Chaka Khan and Tina Marie and Stevie Wonder and The O’Jays and The Isley Brothers. When you woke up Sunday morning and you heard those blasting, you knew you were gonna clean the baseboard. You know that was gonna happen, you knew some dishes had to get done, some loads of clothes had to get washed, boom. But those are my real first introductions to music, especially Black music. I grew up in a household that was really diverse. We listened to everything; I remember listening to Ella Fitzgerald and Billie Holiday 45s, because that’s what my mom and my dad and my grandmom had.

…on the first song she remembers singing.

I remember being in the car with my mom, and TLC’s “Diggin’ On You” came on — randomly, because I don’t think it was even that much of a radio hit, but people were playing it — and so I remember singing T-Boz’s part. And my mom was like “Oh, you can sing that?” And I was like “Yeah! I guess I can, huh?” I was like seven or eight at that point, but it was like “Allright, bet!” I have this really deep connection to music, because that’s how I connected with my family, and my household, and that’s how I established a lot of Black tradition, was through music.

…on her mashup vocal looping cover of “You Got Me” by The Roots and “Cherish The Day” by Sade.

What I love about them both: The Roots, I’m a Philly girl, so of course! What they’ve done for hip-hop, and music in general, spans genres, it spans time. And then Sade, it’s Sade. What else can I say about Sade but “OMG?” Every song is great. A lot of those covers are on-the-spot, so when I was recording in my basement, randomly, I was doing The Roots. And “Cherish The Day” popped in my head because the chordal structure is similar. And it just made sense! A lot of times that happens, where I listen to something, it reminds me of something else, and I’ll start singing it.

…on what about Philly’s Black music legacy she takes the most pride in.

When we talk about music hubs, there is conversation about Philly, but I don’t think there’s conversation about the amount of talent, and the actual growth and replication of talent that happens out of Philly. Being in the city, I’m in this very unique place because I’m able to experience and grow and learn from some of the greats. Philly’s probably one of the only places outside of Atlanta and LA where you can go to a random open mic and you’re sitting there with the MD that tours with John Legend or with Justin Timberlake. It’s just a hub. I call Philly “the gym.” Philly is a place where people — “we talkin’ practice!” — people come here and they get it done. Erykah Badu during the early 90s, Kehlani when she was coming up, so many people come to Philly to catch the vibe and catch the energy.

Jacqueline Constance released two records of instrumental hip-hop with Joie Kathos last year under the name GentleJawns; she also released the solo singles “Convince” and “I Try” last year, and performed a Key Studio Session. Follow her on Facebook for regular updates.