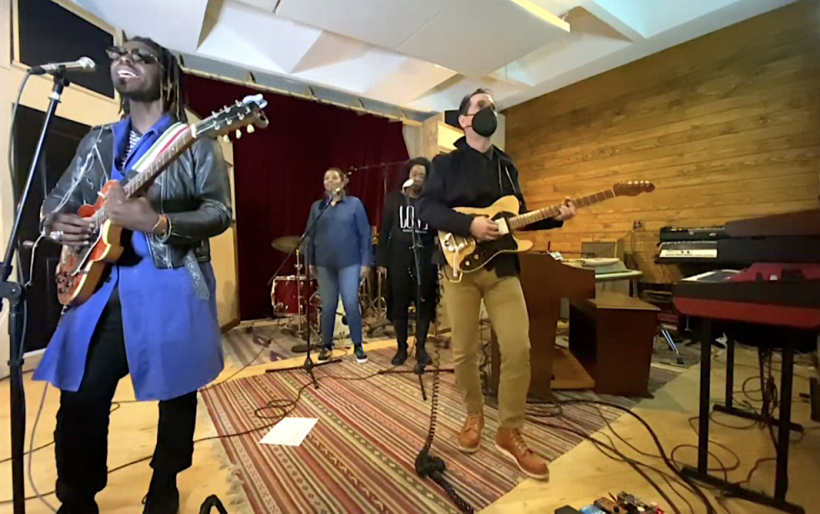 “What kind of guitar is this, a vintage Gibson?” asked Black Pumas‘ Eric Burton in the middle of today’s Free at Noon. “Pretty dope.”

The band was performing today’s set live on location from Electric Deluxe Studios in their hometown of Austin, taking full advantage of their collection of gear and presenting their songs in a somewhat reinvented format. Burton’s bandmate, Adrian Quesada, joined him on lead guitar, with backup singers Angela Miller and Cherie Smith delivering harmonies that intertwined beautifully with Burton’s voice.

While Black Pumas’ records soar in bold psychedelic soul stratospheres, this arrangement of the band brought the mood down to a mellow groove. With Quesada’s guitar providing a soft rhythm and Burton chiming in with light lead accents, the performance stripped their songs down to their essence, and revealed the strength within.

Themes of love and connection carrying us through hard times cropped up in “Fire,” and in “Oct 33,” where Burton sings “Help me hear the birds sing, I’ll help you capture your dream.” Burton sent love out to the virtual audience with “Colors,” which he says he wrote on an uncle’s rooftop eleven years ago; it picked up the set’s energy from breezy to a bop, and showed a definite Marvin Gaye influence.

“We’ll send you off into the sunshine now,” he said (how did he know what a sunny day it was in XPN-land?) as the band wrapped the set with the single “Confines” and its beautiful entreaty: “It’s time to love a little stronger, hold on just a little while longer, come on and walk with me.”

Watch the performance in its entirety below; Black Pumas’ self-titled album is out now via ATO Records.