The Philly Punk Archivist: Meet Mike Eidle of Freedom Has No Bounds - WXPN 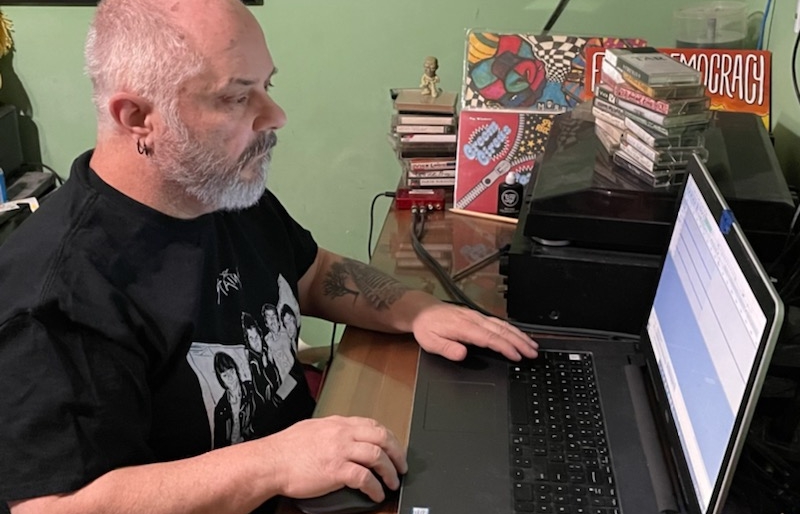 The Philly Punk Archivist: Meet Mike Eidle of Freedom Has No Bounds

On the 11th of November, 1987 Mike Eidle was at St. Mary’s Church on Penn’s campus to watch Ruin, his favorite hardcore punk band. He had brought his Walkman with him to try and record the show, a practice he had gotten into recently. The internal microphone wasn’t terrible and he’d get a decent recording as long as he remembered not to talk during the set.

Fast forward to 2010 and that 23 year old recording became the first thing Eidle uploaded to his Philly punk blog Freedom Has No Bounds – named after a song by Ruin, of course. As he wrote on that initial post: “… when I saw that Ruin was playing I looked forward to that show as much as any touring band that maybe only came to Philly once a year or maybe even once ever. I’m not sure how many times I saw them but I can’t remember a bad show.” Since then the website has grown and grown, expanded to include tons of out-of-print albums, barely-released demos, lots of bootlegs from many long-shuttered venues, and most recently zines.

Asked why he started the site, Eidle – who by day is a web developer at Thomas Jefferson University Hospital – said he was compelled by the lack of local content on similar music blogs. “Going through other blogs … there just wasn’t a lot of stuff from Philly, even bands that were more popular in the scene like Scram and [Electric] Love Muffin,” he told The Key. “I looked them up and I couldn’t find them. So I [thought] I should get these bands up. I also just wanted to share live tapes that I had sitting around and I was slowly working through digitizing.”

Eidle grew up in Kutztown, a town in Berks County midway between Allentown and Reading, and moved to Philly to attend Drexel in 1985. He’s a longtime DJ on Drexel’s student-run station WKDU at 91.7 FM, and someone’s whose tastes in music are very much all-encompassing. All that is made very clear on the website, where a post on John Zorn’s grind jazz freaks Naked City butts up against one about distinctive local new wave band Head Cheese.

Although Philly is definitely on the map these days, that wasn’t always the case, especially in the 80s and early 90s when Eidle was first going to shows. While some punk and hardcore bands from the area did manage to break out on a national level – Dead Milkmen being the obvious, though Flag of Democracy, McRad, and Ruin were all pretty popular at various points – Philadelphia mostly remained in the shadows up until more recent years.

“I’m amazed how I’ll still find bands from the 80s I’d never heard of,” Eidle said. Considering that, visitors to the site will certainly be introduced to things they weren’t previously familiar with.

With so much of our music being streamed online and so much of that being limited by a mix of what’s available and what listeners are exposed to by the all-knowing algorithm, a website like Freedom Has No Bounds offers up a much different experience. You’re not going to find legendary pre-Stinking Lizaveta rockers The National Wrecking Company on Spotify, that’s for sure.

When it comes to the bootlegs – all of which were made in and around the Philadelphia area – Eidle explained that he never felt comfortable with the tape-trading scene. That’s the pre-internet music subculture where people would exchange dubbed copies of shows through the mail. “I’ve done it,” he said, “but the whole just trading with people and not having it available to everyone didn’t sit right with me. So I just wanted to put it out there and hopefully anyone who wants to can find it.”

Some of the recent ones posted to the site include Scottish rock band The Jesus and Mary Chain at The Chestnut Cabaret from 1987, OG goth punks Bauhaus at OG punk venue Omni’s at 9th and Walnut in 1981, and a video from 1985 of Dischord Records’ Beefeater playing at the Star Theater in Camden.

They come from a variety of sources; it’s not just recordings Eidle made back in the day. The Beefeater video, for example, was given to him by the late Lenny Crunch, a concert promoter who booked a ton of shows in Philly and South Jersey in the 80s. And while the Bauhaus bootleg has been available online forever, having it on the site contextualizes it alongside all these other performances. The site makes it easy to do that by using tags to group bands and venues.

The legality of posting any of this to the internet is a bit gray, though he does make it a point to only upload albums that are out of print. Eidle said he tries to get permission whenever possible and will remove posts if asked. He told The Key that the issue has come up just a couple times and for the most part he’s only received positive feedback from the bands.

One of the regular contributors to Freedom Has No Bounds is Brett Tobias, a longtime friend of Eidle’s who also grew up outside of the city and moved to Philly in the early 80s. Tobias had his own blog for years – Noise Addiction, like the album by Pure Hell – and is a consummate collector of punk ephemera.

Tobias explained it this way in an email to The Key: “I think it’s about history and the idea of saving it so it isn’t forgotten. The stuff is important because it helps to tell a story of that time. It’s proof that something happened. It’s a small rare piece of history and there is no organized historical society taking care of saving and preserving it. Only the people who were there and interested people (collectors, etc.) are doing it. It’s also about my own history and history of my generation.”

In the same way that bootlegs and flyers give context to what happened decades back – what bands came through, where they played, what local bands opened, and so on – having a fuller history allows for a better understanding of the entirety of the Philadelphia cultural scene at the time. The details aren’t always crucial but they all add up. Freedom Has No Bounds is full of details and Eidle is always trying to add more. “I’d like to get as much as I can up there that isn’t available,” he told The Key.

The WKDU connection has also been something Eidle has mined for content. He’s posted many live sets from the station’s long history [ed. note: like Eidle, this reporter is also a longtime KDU DJ]. That includes stuff from pop punk darlings Swisher, Joe Jack Talcum of The Dead Milkmen, and surf punks More Fiends.

Not surprisingly, WXPN also shows up quite often on the site. Not only has he uploaded old recordings of bands playing live but Eidle even turned up a tape of one of DJ Eddie Hacksaw’s shows from 1982. They also recently posted a video of Crash Course in Science playing the memorial show for XPN DJ Lee Paris four years later.

Since he started going to shows Tobias was in the habit of keeping old flyers, demo tapes, and other scraps of what is now history but back then might have seemed totally insignificant. Asked why, he said, “The reason I held on to flyers was because a lot of the ones I had were from shows I was at or bands I liked and, in some cases, because the artwork was great. I saved fanzines because of the information that was in them, and the photos. I saved the tapes because they had music on them that I liked. When I became a tape trader in 1982 it was because I was interested in hearing what the punk bands of the 1970s sounded like live because I never got to see them play.”

He also pointed out how many bands only put out one 7” record or a demo tape or maybe just a couple songs on a compilation. These days it’s easier to track down everything that a band has released but before the internet that involved a lot more work. Still, he doesn’t feel like there’s a big difference between today’s scene and 30 years ago. “We were living in the moment and didn’t have a whole lot of time to think about it, as I think it is with most people when they are young,” he told The Key. “Things are happening and you move from one moment to the next with no break to process.”

Like many subcultures, punk exists very much in-the-moment. There’s no real thought given to what might happen in six months much less a year much less a decade from now. You can hear that not just in the lyrics but really in the immediacy of the songs. This is loud, aggressive music that has always existed to carve out space from the mainstream.

While the punk slogan might be “live fast, die young” Tobias joked that “now we are living slow, going to die old, and the moment has passed.” That makes it “the perfect time to dig the stuff out of the closet and reflect on it and process everything that we lived through,” he added. Still, both he and Eidle continue following new bands and going to shows. Even if Freedom Has No Bounds is documenting the past, neither of them are living in it.