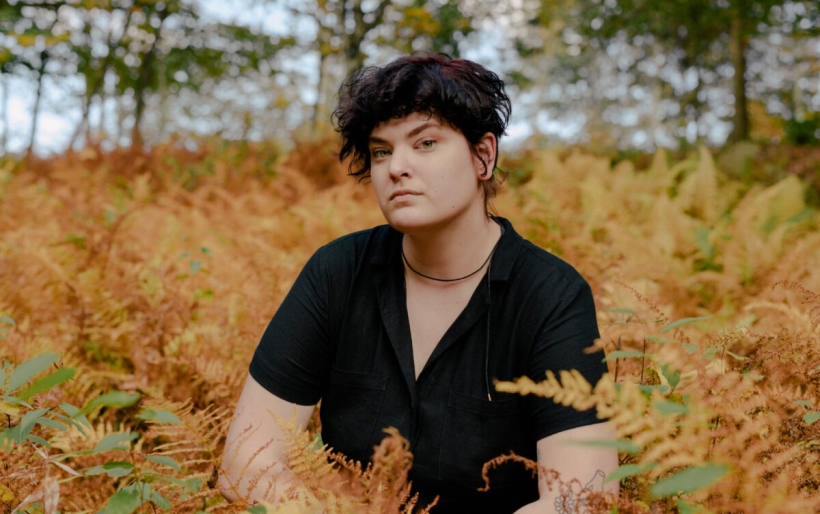 Adult Mom’s Stevie Knipe on finding personal freedom, recording in Philly, and the journey of Driver

Most people have had a “driveway moment,” when you’ve made the trip home but don’t want to open the door yet. Stevie Knipe, frontperson for Adult Mom, knows that feeling well. They describe this on their single “Berlin,” in the chorus singing, “Sit in the car parked in the dark, hearing rain drop on the roof.” Knipe says that line is about “when you come home and you’re not ready to go inside to the house and end the day.”

“I used to just sit in my car right next to my house for like, 20 minutes, half an hour,” they say. “You know, it’s just like that space, that’s right in between ending your day officially, I think there’s a serenity that comes when you’re just sitting alone in your parked car.”

That idea runs throughout their latest album Driver – out this Friday March 5th on Epitaph Records – that of being behind the wheel, but not entirely sure what comes next. Knipe describes this as the same feeling of entering one’s mid-20s and realizing there’s more to the story than what had already been predetermined. Seeing an open expanse at your quarter-life, and wondering where to go from there – expressed pretty literally when they got their driver’s license at age 21, and they realized how much freedom that brought all of a sudden. This was around the same time a lot was changing for them – they had ended a relationship, quit their job, and moved out of their apartment.

“And I was like, ‘Oh, God, I couldn’t have been able to do any of that safely without my driver’s license and my car,’” Knipe recalls. “And then I was like, you know, just trapped in my parents’ suburban home after that for a couple years. So the car really was this, like, freedom for me. I could go anywhere I wanted. And then I got into a really fucked up car accident.”

Their dad’s old Chevy Impala got sideswiped on the highway by a semi – Knipe was okay but the car was totaled. It was a reminder for them that liberation can also be “dangerous and terrifying,” a realization that inspired a couple songs on the record, like on “Dancing” when they sing, “I’m dancing to the song I crashed my car to / feel something new / fall in love with an old tune.”

They recorded the album at Philadelphia’s Headroom Studios, after working with producer Kyle Pulley on demos for a few months. This was Knipe’s first time producing, and they and their partner (and drummer on the record) Olivia Battell bunked in Headroom while making the album.

“We would wake up at like 9 a.m. every day; we would either run and get coffee, [or] someone would make coffee and we would just start recording,” remembers Knipe. “And so it’s like I was actually experiencing Philly also just through the four walls of this warehouse.”

“What I loved about working with Stevie and Liv was that they were down to record and re-record the demos and try out all kinds of ideas.” says Kyle Pulley, who co-produced the record and plays bass on it as well. “My favorite thing was just getting to hang out with Stevie and Liv. We had such a good time – their partnership in music is inspiring and they are just so goofy and fun. It felt like we were riding around in a tour van just kicking it.”

Since most of the work had to be done remotely, Knipe and Pulley were mostly sending each other audio tracks and giving each other feedback. Much of what was recorded in the demos ended up on the final product.

“Stevie had a clear vision of how they wanted to perform vocals and what kind of mood needed to be conveyed in each song,” says Pulley. “So rather than try to translate that vision, I encouraged them to compile their own vocal takes in ProTools before I went through and swapped out any particular word or note.”

This vision is not only expressed lyrically as Knipe sorts out personal relationships and their own direction in life, but also through sounds that recall late 90s/early 2000s alternative rock – The Cranberries and R.E.M. have always been big inspirations for Knipe, and a pillar candle featuring Michael Stipe’s face was placed in the recording booth as a muse. Meanwhile, Allegra Eidinger, who records their own music mononymously as AllegrA, contributed guitars on this record that stick pretty closely to that vision – on the album closer “Frost,” they enter a solo with trumpet-like fanfare, and in other parts of the album stick to palm-muted staccato that, Eidinger and Knipe both agree, recalls Paramore’s After Laughter.

“It was really easy to work with [Knipe] on this,” says Eidinger, “because I already had a pretty good reference of what Adult Mom had gone for in the past with Soft Spots, and I knew that Stevie wanted to have this record be the next level, kind of a maturing in a way.”

That maturation is definitely evidenced in the grander sound, with their origins in quieter, more intimate rock peeking out here and there. Adult Mom is making a leap on this record, but it pays off. Knipe has a way of introducing each song with very minimal ornamentation, then delivering the shiniest and catchiest hooks just as the song nears its end. In press about this album, Stevie described it as the “soundtrack [to] the queer rom-com they’ve been dreaming of since 2015.”

“Whenever I think of a rom-com,” they say, “it’s like it’s an amalgamation. It’s just like one long story, and then it ends. But I guess what I’ve been working with is, ‘Okay, but then what happens after the final scene is cut?’… I’m trying to figure out what the story was after.”