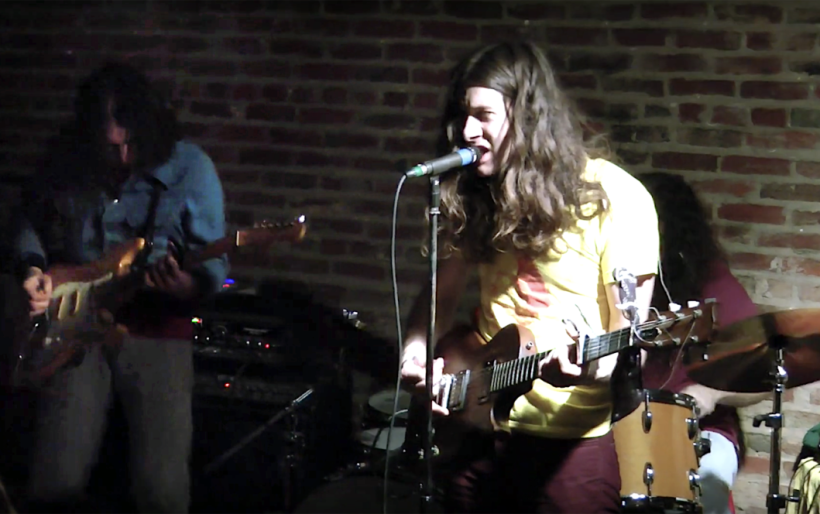 “You guys are our people, Philly,” Kurt Vile tells the crowd at AKA Music. “As if you didn’t know.”

The scene is the exposed brick back room of the beloved, dearly departed Old City record retailer on March 4, 2011; it’s first Friday, the crowd is a mix of wine-drunk gallery hoppers and devoted indie rock fans, and Vile and his bandmates are playing an early album release party for his fourth LP, Smoke Ring For My Halo.

In this video of the show, we see a mix of explosive Violators energy and semi-acoustic control (it sounds great, despite the unforgiving acoustics of being surrounded by three brick walls). Vile jams out with his bandmates — who on that tour included The War on Drugs frontperson Adam Granduciel on guitar, along withdrummer Mike Zanghi, and longtime Violators Rob Laakso on bass and Jesse Turbo on guitar.

A lot of axes were in play, and at one point between songs, Vile jokes “Who wants to be our guitar tech?” One heckler jokes “How many fuckin’ guitars do you have, man?” Vile’s on-brand response: “Idunno.”

The usually-reticent singer-songwriter is positively chatty (for him) at this gig, the hometown nature of it being an obvious factor. “You guys have been a great audience of people we can relate to,” he says towards the end of the set. “We love you for it.”

In addition to Smoke Ring highlights, we hear a cover of Bruce Springsteen’s “Downbound Train” (later recorded for that fall’s So Outta Reach EP), a handful of songs from his Matador debut Childish Prodigy, and a smoking performance of “Space Forklift” to close the set (a Constant Hitmaker nugget he discussed for our Time Capsule series back in 2016).

Watch the show and check out the setlist below.