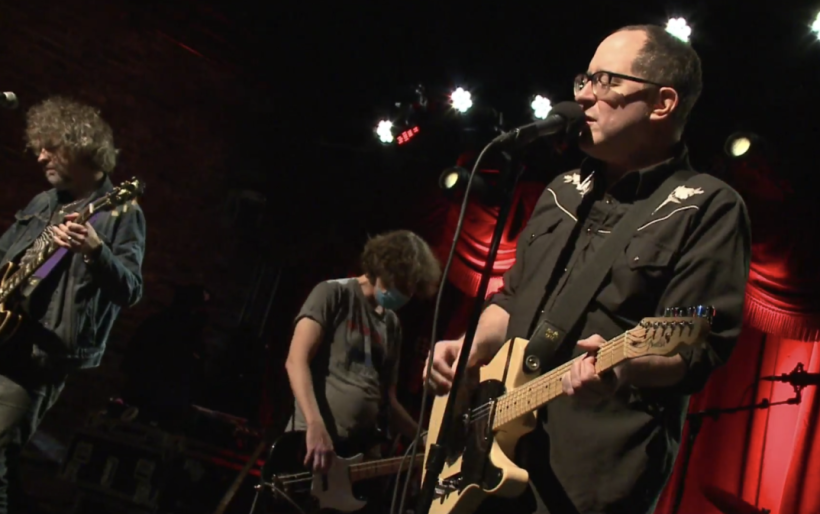 The Hold Steady | still from video

New York rock faves The Hold Steady have a big weekend ahead of them as their Weekender livestream gigs continue tomorrow. To warm up (and celebrate their new record Open Door Policy), they performed a Free at Noon set today live from their neighborhood venue Brooklyn Bowl.

The gig started out on the slow and sublime solo piano opening of “The Feelers,” a brooding ballad full of singer-songwriter Craig Finn’s troubled characters out of a modern film noir: “she had the aura of an angel, she had a couple problems,” he sang, before easing into “Lanyards,” another new song that took the band from a whisper to a holler. The pacing kicked into a slamming beat, with big guitar chords on the refrain, and vivid images throughout: someone calling an ambulance, somebody else drowning in the Pacific Ocean, and several cities across the United States namechecked along the way.

Finn welcomed the accompanying players of “The Horn Steady” to the stage for another new song called “Spices” — that’s Stuart Bogey and Jordan McLean of Antibalas, as well as sax player Peter Hess — and they stuck around for the rest of the set, providing appropriate fanfare for the XPN fave “Sequestered In Memphis” and lifting the the sprinting pace of “Family Farm” as the set closed.

“We’re making the best of the scene we have, the cards we are dealt,” Finn said, “We wish we could be there in person.” The energy they brought made it the next best thing. Watch The Hold Steady’s Free at Noon below, and check out the Free at Noon archives here.