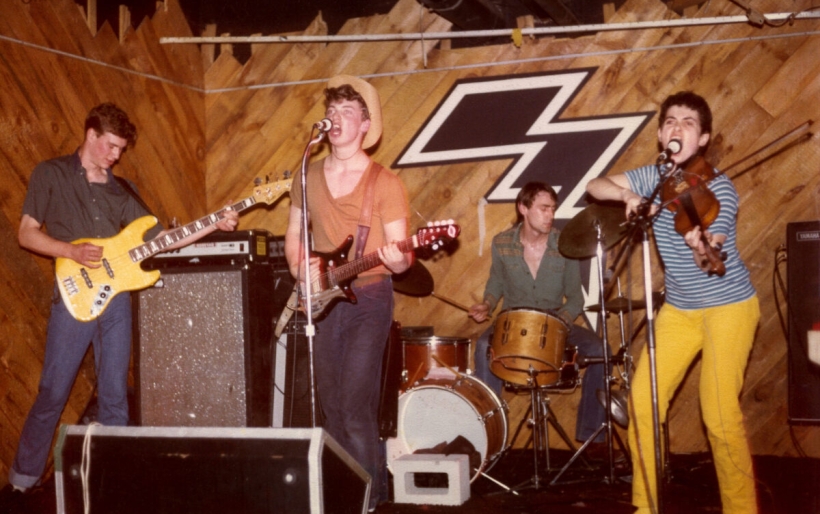 Vitamin in 1981 at The Underground in Boston | Photo by Pia Francesca, courtesy of Margie Politzer

Boston, 1979. Punk was in its infancy both as a musical style and a counter-culture movement, having just started a few years prior. Bands were forming at a frenetic pace as musicians and non-musicians alike became enamored with this new “no rules” style that seemingly blended everything from rock n’ roll to atonal noise to free jazz and more.

Jason Shapiro and Mike McGlinchey were two teenagers in that scene. Totally in love with punk and everything it represented, they decided to start their own band, despite the fact that neither could really play an instrument. A minor and easily-ignored speed bump on the road to success.

Shapiro’s father Paul was a guitarist who played in groups including a pre-J. Geils Band act called Hallucinations that was active in the 60s. Jason Shapiro grew up going to concerts with his dad, something that had a definite impact on his future endeavors. He was 12 he got his first guitar and a year or so later he formed a band with McGlinchey, who was learning bass. They decided to call themselves Vitamin.

At around the same time, Shapiro was hanging out at 38 Thayer Street, an old factory in the South End that had been converted into an arts space and venue. It was there that he saw what would become another huge influence on Vitamin: an over-the-top art punk band called The Girls that had made a name for itself in the Boston scene.

Loud, weird, and wild, The Girls were described as “a fully weaponized art-punk approach that destroyed minds with regularity” by Byron Coley of Feeding Tube Records, who reissued their album in 2015. Vitamin not only took those lessons to heart but also managed to recruit the band’s former violinist: Margie Politzer, a 25 year-old artist and musician who had been living in Boston since graduating from Rhode Island School of Design a few years prior.

Steeped in punk since she was a teenager growing up in Queens and with a longer musical resume than either Shapiro or McGlinchey – along with time spent with The Girls she had also played with performance artist Steve Stain – Politzer brought a level of experience to the fledgling band. While members came and left during those first few months, the lineup finally coalesced when drummer Chris Gill joined. He had recently returned from San Francisco and a head-first dive into that city’s burgeoning punk movement.

The multi-generational band exploded on the Boston scene. They played shows at the loft spaces that typically attracted the more art punk crowd but also at more mainstream rock venues like The Rat, a legendary music club that hosted everyone from Talking Heads to R.E.M. to Metallica to the Dead Kennedys. They became known for their onstage antics – in a 1980 profile the magazine Boston Rock wrote that, “They’ve blown off firecrackers and shot hot dogs from cannons” – as well as their off-kilter but very catchy songs. It was punk in snottiness and volume, for sure, but there were also elements of jazz, no wave, and pop.

By 1981 Shapiro and McGlinchey were turning towards hardcore punk, something that didn’t interest Politzer at all. She soon left Vitamin. The band continued for another couple years before calling it quits. Shapiro moved to California and ended up in glam rock outfit Celebrity Skin with Don Bolles from legendary punk act The Germs. He now plays in Redd Kross. Politzer moved to West Philadelphia, where she’s been ever since.

Like many from that early era of punk, Vitamin did not release a lot of music, though they did record with Roger Miller from contemporaries Mission of Burma in early 1981. The bands were friends and Politzer even designed the album cover for the first Burma 7” record. Of the four tracks from that session the lone one released officially was “Black Sheep” – possibly the only song in the history of punk to include a snippet of “Mary Had a Little Lamb” on violin – which ended up on the A Wicked Good Time, Volume Two compilation alongside other area bands like The Freeze, Future Dads, and Boys Life.

Now, 40 years later, those recordings and a bunch of live tracks are finally seeing the light of day thanks to Don Giovanni Records. We recently sat down with Politzer to find out more about Vitamin and her life since the band.

The Key: Reading the liner notes from the album, it says that the first punk show you ever went to was Talking Heads and Television in 1976. Did it feel weird that punk was still a thing even five years later when you were doing Vitamin, much less now, 45 years after that show happened?

Margie Politzer: Not that this really matters, but on consideration of that statement I thought of another show I went to that turned out to be before that 1976 show at CBGBs. I saw the Talking Heads play at a midtown club called Mother’s. According to the Talking Heads’ concert Wiki they only played there once in November 1975. (Opening band was Sniper, who I don’t remember, and it was evidently after Joey Ramone had left the band.)

In the early days, punk wasn’t well-defined. Looking at the artists that became the best known from the NYC scene, they were all very different from each other: Ramones, Patti Smith, Talking Heads, Blondie. “Punk” was more of an attitude of going against the grain in rock music (and otherwise) and opening up the possibilities of what rock could be. It wasn’t surprising to me that that attitude would continue on.

I do consider it weird that punk is still a thing; that there have been punk bands continuously since its inception. I also find it surprising that 20 and 30-somethings are interested the punk from the 1970s-80s. I wasn’t interested in the music from the 1930s-40s then!

TK: What does Vitamin mean to you now? What lasting effects did being in this band and in that scene have on your life?

MP:I feel fortunate to have been able to play with the young, creative guitar prodigy Jason Shapiro especially. I’m not sure that Vitamin, in particular, had much of a lasting effect on my life except for the friendships I developed with Jason (kinda like a younger brother) and also with his mother (RIP Greta Shapiro).

Vitamin wasn’t much recognized at the time, or well known, but it could be that being in Vitamin is about to have some effects on my life with this record coming out!

As for being part of that scene: I feel fortunate to have been involved with music when the possibilities seemed so open. It was an exciting time; I feel that I was a part of the group of people who experienced something special.

TK: You’re a photographer and artist but you’ve never played in a band since this one. Why not?

MP: Playing in bands was a diversion for me from visual art that I couldn’t pass up at the time; I got swept up in the excitement. When Jason and Mike asked me to jam with them I really didn’t want to join another band but I had just seen them play and had to check it out. So I jammed with them and it was a lot of fun. They were so free in their playing and appreciative of my contributions. I couldn’t say no to continuing on with them. After Vitamin I was ready to concentrate on visual art, specifically photography at that time. So when I moved to Philly, I had no interest in playing in another band.

TK: Don Giovanni is putting this out, which is awesome. They’re not a label known for archival releases. How did this come together? Had you received interest from other labels in the past?

MP: Don Giovanni is the third label we thought was going to release our material. The first attempt was in 2015 and both attempts fell through. Last year we accepted that the second label wasn’t going to come through. Then Brett Tobias informed me that the Vitamin cassette recordings (that he had posted on his blog Noise Addiction some years ago) had been posted on YouTube by someone else [ed. note: Tobias and his blogs including Noise Addiction II and Freedom Has No Bounds were covered in The Key last month]. That’s when I became determined to at least post our material online, since the second label had remastered our songs. I asked my then-neighbor Tobias Jeg of Red Scare Records which website he would recommend. He said that this material should be represented by a label. He thought Don Giovanni might be interested and he introduced us. We are really happy to have a release coming out, especially on vinyl.

TK: What music do you listen to these days? Do you still (pre-pandemic, of course) go to concerts regularly?

MP: This is the most difficult question! My tastes are fairly eclectic but I mostly listen to music that has a creative edge, mostly rock-based with some “world” music and other types thrown in and not too noisy. Yes, I’ve mellowed out! I like music that mixes genres and cultural influences, thus difficult to define. I use Spotify to discover music that is new to me or that I have forgotten about.

As for concerts, I haven’t gone to many in recent years, unless it was someone I really wanted to see, or was someone I know personally. I am a morning person, and staying out late is no longer worth it to me.

You can see more of Politzer’s art and photography on her website.