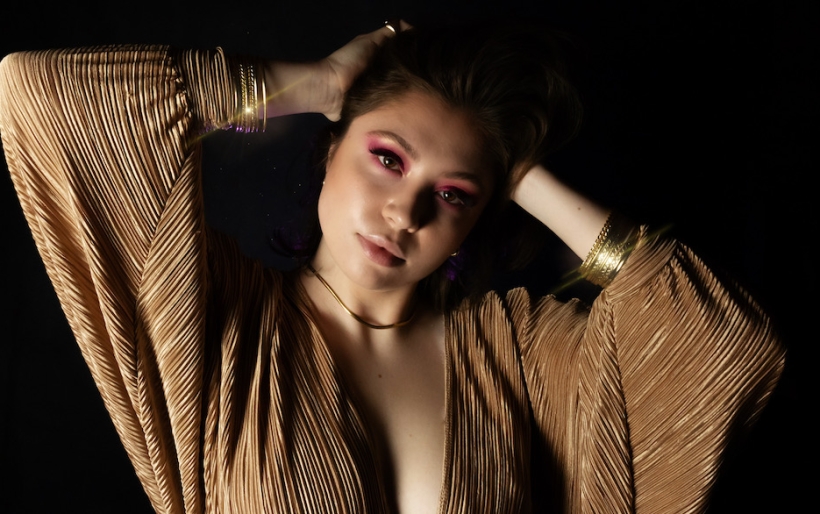 While a handful of emotions and recollections of hardships compose the sound of Silhouettes, Olivia Rubini is still triumphant. The Deleware native’s debut LP, released earlier this winter, re-imagines the negative outcome of a relationship into something worth celebrating, as Rubini flourishes as a songwriter and personally through each track.

From heartfelt ballads to upbeat, jazz-tinged tracks, Silhouettes acknowledges all parts of growth through inward reflection, as it begins with self-doubt and concludes with triumph. The Key spoke with Olivia Rubini about her experience making her first full-length project after releasing singles since 2015.

The Key: Silhouettes is a very vulnerable record. Was it difficult to put your emotions into your work in such a manner?

Olivia Rubini: Some songs were tougher than others, but overall, writing the album felt like more of a release than a strain or reluctant push to be vulnerable. I think the lyricism of the album allowed me to be emotionally vulnerable and genuine without seeming overly fragile; I still wanted to highlight the highs even when diving headfirst into the lows. Throughout the record, the lyrics are sophisticated enough to tell a story and convey specific emotions in a way that may take time to process and fully acknowledge.

I feel like if I made the lyrics too straightforward without a veil of mysticism or sophistication, I would have felt much more exposed, and conveying my emotions would have been far more difficult. At times, being able to toe the line between emotional honesty and veiled lyricism was tough and would take months of tweaking to perfectly express myself, but when it felt right, I knew it was right.

TK:The way the record is a collection of songs about a relationship reminds me of something like Lorde’s Melodrama, holistically narrating a party through individual tracks, sort of both taking moments and forming it into a whole body of work. Did you plan on having the record turn out this way, or was it a more spontaneous approach of putting yourself into the music? What was your vision for this project?

OR: My vision at the start was never necessarily to create a cohesive, chronological storyline, but as the album progressed, it became clear to me that that’s what I was writing. While I wrote more and more, without any grand scheme, the songs seamlessly created a record that conveyed a story, starting with self-doubt and concluding with triumph. With the wide variety of emotions throughout the album, the experience and takeaway change from listener to listener; you find the takeaway you want to find deep within each track. And while the album is a cohesive story when listened to as a body of music, each song can individually stand on its own and convey a distinct, powerful message.

This idea of variety amongst cohesion intertwined with escapism was my vision from the start. I wanted there to be a song for everyone, regardless of their emotional state, situation, or attitude; there are songs of empowerment, full of sass and sarcastic digs, next to songs of pure heartbreak. Regardless of the song, I wanted to maintain a sense of escapism, which is also very prominent in the artwork and visuals. When conceptualizing the album as a whole, I knew I wanted the music to be a place where listeners could come to truly block out the world around them and create their own. Personally, I love listening to music where I can let my mind escape and become immersed in sound, and I wanted to create that experience for my audience. I think in being spontaneous and genuine, I was able to tell a story even though that was not what I initially anticipated.

TK:Lyrically, there are dynamics present on the record of turning inward as a result of issues within a relationship, as well as being so careful and trying your best to make things work yet that not being a result, like the lyrics “took time and chose carefully” and “Did it I did it again / Never turns out how I planned.” When things don’t go as planned despite doing everything right or trying your best, it can definitely feel really frustrating. What did you learn about yourself as a writer and a person from reflecting on these dynamics and overall through writing the record?

OR: Throughout writing the record, I think I learned a lot about myself as a writer, both lyrically and melodically. Mostly, I feel as though I became comfortable in conveying my intended message through artistic lyricism in a way that I had never done before. By continually writing, I became confident and strong-willed about my lyrical ideas, where I had been self-conscious in the past. And through this confidence, I was able to be genuine without restricting myself or questioning the manner in which I’m choosing to convey my emotions.

I think the lyrics can often be interpreted in many different ways depending on the listener’s perspective, since they are not always straightforward and clear-cut; this form of lyricism was somewhat new to me since I hadn’t previously written lyrics with this level of emotional vulnerability or refined artistic vision. In fighting the sometimes-frustrating writing process, I most definitely matured as a lyricist. As a person, I think writing the album helped me to realize that your initial vision is not always the winning vision. Throughout writing this record, that dynamic plays a huge part in the creative process. Any artist knows it’s easy to fall into the pit of never being satisfied, constantly questioning yourself and your abilities, which can be extremely frustrating. But I think through this process, I was able to overcome that and, just as the album reflects, become self-assured; even though it “Never turns out how I planned / Sun always shines where I land.”

TK:It’s mentioned that making this record was a very intimate experience, with you having a hand in every aspect of it. What was your favorite element of making Silhouettes?

OR: Besides the actual writing of each song, lyrically and melodically, I think my favorite element of creating Silhouettes was my involvement in writing and producing the arrangements, which were primarily centered around real instruments and musicians. For a lot of my previous releases throughout the years, the arrangements were collaborations with me playing the smallest part; but for this record, I wanted to have my hand in every aspect of each song which meant writing arrangements in a way I hadn’t before.

From the start of the record, I was active in every aspect of production, and as the songs progressed further and further, I became focused on the smallest of details, which was an incredible experience; I gained a lot of production knowledge over the last year or so due to my heavy involvement and particularity. Further, I loved the process of involving so many talented musicians. Being able to share a space with wonderfully talented players and watch them create magic is an inexplicably beautiful feeling and I truly feel so honored to have had such brilliant musicians take part in making my vision a reality. Strong musicians who genuinely play with a passion for the music they’re making convey just as strong a message as the lyrics they’re playing along to, so without them, Silhouettes would not be Silhouettes.

TK:I really like how tracks like “Last Time,” an emotional piano ballad, and “Be Well,” a catchy, upbeat track reminiscent of sounds like Dua Lipa’s Future Nostalgia, coexist on the same project. Was it important for you to still celebrate yourself on this record, despite there being some challenging and emotional themes?

OR: Absolutely. As I mentioned previously, it was massively important to me that there was a wide range of variety on this album. I didn’t want the record to seem monotone with only one genre or one groove through its entirety. With that, as a writer, it feels good to expand your abilities beyond one small bubble and experiment with genre lines, attitudes, topics, etc. Being able to have such a strong variety of songs coexist is an aspect of the record I’m extremely proud of.

While I wanted to convey some of the more serious tones and deeper self-reflection in ballads, I also think it’s necessary, at times, to view a serious situation through a lens of jest and playful confidence, which resulted in songs like “Never Call Me, But Call Me”, “Just Around”, and “Be Well.” In celebrating myself and my own mini-victories along my journey, I wanted to give my audience music to totally celebrate themselves, have fun, and sing their hearts out! It’s possible to play with the lyricism of deeper emotions, vulnerability, and self-reflection while flipping the script to become a personal victory and celebration, and that was something I had to discover for myself throughout the writing process.