The Skeleton Key: Finish off March with Moor Mother on Minecraft, Ghösh live from UA, Queen Elephantine in Mount Moriah, Eulogy archives, and so much more - WXPN 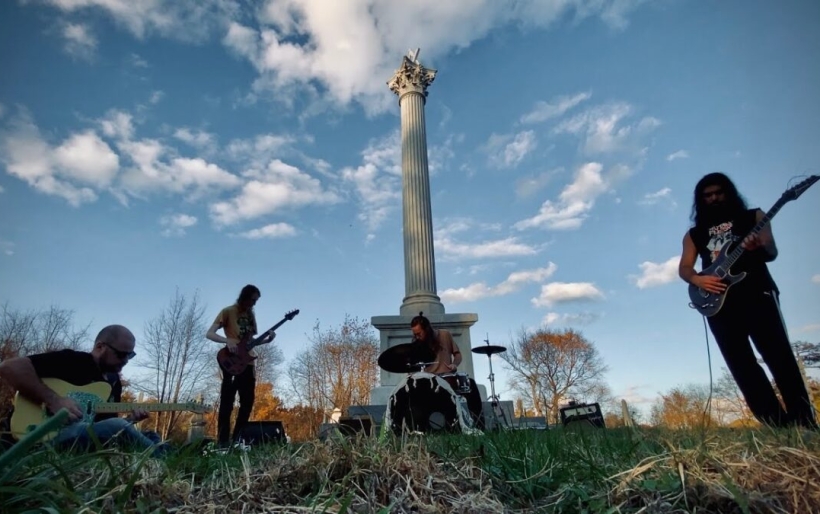 The Skeleton Key: Finish off March with Moor Mother on Minecraft, Ghösh live from UA, Queen Elephantine in Mount Moriah, Eulogy archives, and so much more

It’s honestly amazing that we’re still going. We’re still putting out new music, still holding events, still creating art, still hoping that tomorrow is better than yesterday. I’ve certainly thought about cutting this column down to once a month or maybe just putting the whole thing on pause until we’ve achieved some level of normalcy again. Then I could pop back in with a big THE SKELETON KEY HAS RETURNED article that would certainly go over great. I’m sure you can imagine it: “Can you believe it’s been a year since I’ve written one of these? Wow! What a terrible time. But we’re through the worst of it and now we have shows again and that’s what matters.”

Except it’s not what matters. What matters is that struggle, the ways we’ve adapted, the ways we’ve figured out how to stay positive or at least not get too overwhelmed by the sheer horror of the world. It’s amazing and I can’t wait to celebrate with you once we’re all vaccinated and can start taking baby steps back into whatever comes next.

Though for real, if we only published this column once a month it would be obnoxiously long. Despite everything I don’t think there’s been a time when I’ve been hard up for things to write about every two weeks. While chronicling the current state of music in Philadelphia is certainly depressing, putting this column together has been one of the few things that’s given me a bit of optimism over the past year. I hope it’s done the same for you dear readers.

Speaking of all that let’s kick things off because as always there is a lot to get to, starting with tonight’s Warp Factor 9 concert. Regular readers know that I’m a huge fan of this classical and avant series and this evening’s show with Kendrah Butler-Waters and Gabe Preston Sounds looks to be absolutely wonderful.

Butler-Waters is a pianist, violinist, and singer who blends jazz, classical, and gospel. She is a former Kimmel Center Jazz Resident, which is really cool, but most excitingly she recently composed the music for an episode of the “LeVar Burton Reads” podcast focused on Philly science fiction giant Samuel “Chip” Delany. Gabe Preston Sounds or GPS is a woodwind, keys, and drums trio that creates dreamy, beautiful jazz fusion tunes. You can read more about them in our writeup over here.

Let’s stick with jazz for a second cause on Saturday night the Alternative Guitar Summit is honoring local legend Pat Martino with an online concert featuring Rez Abbasi, Adam Rogers, Sheryl Bailey, Kurt Rosenwinkel, and more. If you’re not familiar with Martino or his extensive back catalog I’d recommend starting with 1976’s Exit, possibly his most well-known album. You won’t be disappointed.

On Sunday afternoon the Penn Museum is hosting an event they’re calling Jazz Combos: Music and Protest that’s focused on “the relationship between jazz and protest movements.” The speakers for this will be Ingrid Monson, the Quincy Jones Professor of African American music at Harvard University, and Nicole M. Mitchell, the founder of Black Earth Ensemble and the first female president of the Chicago’s Association for the Advancement of Creative Musicians.

That night Warehouse on Watts is having WKDU’s BG Kiki and Randy Winters spin live, which will be a treat. The space has been doing a bunch of these recently and you should subscribe to their Twitch to stay up to date.

Monday evening the Philly Orchestra is premiering another episode of their Our City, Your Orchestra series of online concerts “performed by small ensembles, recorded without audiences at Black-owned businesses and iconic cultural locations throughout the region.” This one will be at the NextFab space and features what looks to be a very interesting lineup including strings, percussion, and multiple people who make instruments.

Let’s pause the calendar here so we can talk about a bunch of new music. Actually before we do that I want to set the mood, so to speak, with this really fun video that TVO put together recently for their song “Split” on the Alive! 7” that came out back in late December. It’s short but sweet so make sure to just leave it looping – or go over to their Bandcamp and listen to the whole thing – while reading through the rest of this column.

This two track cassette from West Philly synth nerd Phil Yeah is a beautiful study in sound. Made up of manipulated field recordings done while kayaking on the Schuylkill at night and hanging out in spots like Bartram’s Garden during the day, the 30 minute songs are a mix of ambient, drone, and the always lovely sound of the modular synthesizer.

Surfy post-punkers Dark Web have done it again! The band – I’m actually not sure how steady the lineup is outside of Skeleton Key favorite Sims Hardin – last put something out in 2018 and I was pretty sure they had called it a day. Sims is now in the absolutely amazing Mesh who will be releasing their debut soon. Still, if this is a posthumous release, it’s a very good way to go out.

Wasnt Wisnt, a South Philly duo made up of Jim Lewis on drums and additional percussion and Steve Heise on guitars and synth, have been making psych-y, fun music for almost a decade at this point. Disassembling is their latest, released on Already Dead Tapes out of Atlanta. It’s noisy but definitely not harsh, riding that fine line between shoegaze and the more experimental side of indie rock.

Never underestimate the power of being a total pain in the neck. For years I’ve been bugging Justin Duerr from Eulogy – you might know him from his current band Northern Liberties or maybe you recognize his fantastic, one-of-a-kind art – to put up a Bandcamp of everything that industrial post-punk collective recorded and finally he did it. Well, that’s not true. He delegated the job to the singer of the band, Butch, who was equally incredulous that anyone would care but was excited to set up an archive.

Eulogy was one of my favorite bands back in the day and I found everything they did totally inspirational and awesome. They even played the first basement show I ever went to, which counts for a lot. But unlike other bands I used to see regularly back then – not going to name names here, that’s what Twitter is for – Eulogy totally holds up. It’s raw, noisy, weird, imaginative, and totally catchy. Part Neubauten, part Savage Republic, and entirely West Philly, they were a force to be reckoned with. Also, nobody else could pull off a Sugarcubes cover in an abandoned oil refinery with such panache.

If you were a fan back in the day and your CDR from 1999 stopped working OR if you’ve never listened to this band but all this sounds intriguing, I’d urge you to check out their Bandcamp. You won’t be disappointed.

It’s not a huge leap from the music of Bunnydrums, David Goerk’s new wave punk band since 1980 (currently on hiatus), to this new album of synth-heavy electronic songs that he just put out. Not only are all the elements still there but that menacing tone present in all the best Bunnydrums stuff feels even more magnified here. This is coming out on a 7” in April on Little Room Records so keep an eye out for that.

Since we’re on the topic, you should also be sure to check out the recently unearthed Bunnydrums video that the Philly punk archivists over at Freedom Has No Bounds uploaded. They’ve also been stepping up their zine game: a scan of Terminal #8 was just posted with articles about King of Siam, Poison Girls, Flipper, and more.

Before I get back into the calendar I wanted to quickly mention the ongoing fundraiser that LAVA Space is doing to try and fix the roof of the community space and keep up with the bills. They’ve had numerous musicians play on that roof – technically speaking the “Broken Roof Sessions” happen on a deck off the second floor, but you didn’t hear that from me – with the most recent being rapper YOSHiSUHN a couple weeks back. Now there are three different LAVA t-shirts being sold as part of the benefit, all by noted Philly artists.

On Thursday the 25th it’s the next date in Bowerbird’s Liminal States, the late-night concert series co-presented by The Rotunda that you’re supposed to listen to as you fall asleep. As the invite puts it: “Aiming to center and calm, the musicians will seek to lead listeners to that magic space between awake and asleep.” These shows have been as blissful as you might imagine. Harpist Mary Lattimore will be playing this one and I am very much looking forward to it.

Chill out while you can cause the next night industrial dance duo Ghösh will be bringing the noise to a stream live from Underground Arts alongside fellow freaks Sour Spirit and Manikineter. You can read more about that in our preview.

Also that evening will be the record release for techno act BPMF and the beginning of a 48 hour long ambient and electronic stream put together by The Bunker in NYC featuring numerous Philly artists including Carl Ritger, Leisure Muffin, and the aforementioned Phil Yeah. At around the same time there will be an online panel discussion hosted by WHYY about the future of music spaces called “Vulnerable Venues: The Effort to Preserve Philly’s Stages” that you should probably tune in to as well. Can’t be everywhere at once but you can have multiple tabs open at the same time.

The last date on my calendar is one of the cooler things that’s happening this month: Moor Mother is playing a concert in Minecraft. I don’t totally know what that means but I’m very excited to experience it. I don’t think that this is the future or anything – Union Transfer is announcing shows for November, including one for Dinosaur Jr., and fingers crossed these gigs will happen – but I am always a proponent of experiencing music in non-traditional spaces and it doesn’t get much weirder than legit ‘virtual’ concerts like this one.

On the subject of non-traditional spaces, psych rockers Queen Elephantine recently uploaded a video of a set they played in Mount Moriah back in November. This is some heavy and noisy stuff that certainly veers deep into experimentation at times. The whole thing is a great listen and the backdrop of the historic, semi-abandoned Southwest Philly cemetery makes it all the more cooler.

Alright! That is it for this edition. I will see you all in April! Remember that you can always find me on Twitter at @talkofthetizzy with any hot tips.