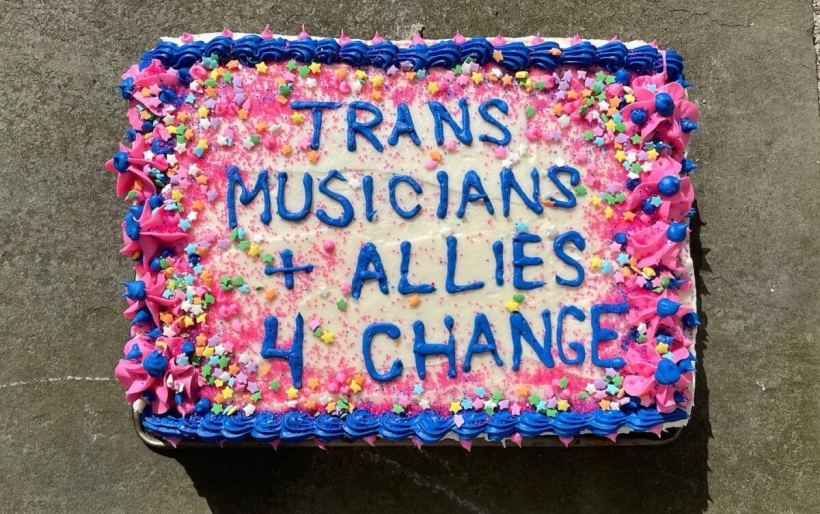 On March 5th, Z Tapes released Trans Musicians & Allies for Change, a benefit for Trans Lifeline compiled by Philadelphia’s Portia Maidment. The tape comes crowded with twenty-one tracks of as many shapes, from unreleased originals to covers and demos, some totally orchestrated and some just germinated, all full of touching surprises. From Philadelphia and over the country, indie artists big and little offer up their messages of unequivocal care – Highnoon, 2nd Grade, Harmony Woods, Buddie, Bellows, Fred Thomas, Carly Cosgrove, Swim Camp, AllegrA and more.

Maidment, who releases music as Port Lucian, and who just turned 21 on the day of the release, said they felt inspired to create the tape after hitting too many barriers to volunteer activism in 2020 during the pandemic. They already had experience booking shows and organizing events, so they decided to devote themself to this project, their first ever compilation, while stuck at home attending remote college classes. From the start, Maidment knew they wanted the project to support Trans Lifeline, a trans-directed organization who maintains a peer support and crisis support hotline for the trans community. The nonprofit also provides attorneys and funds for legal name changes, which can cost hundreds of dollars and create a major financial burden on an individual going through a transition.

Maidment chose to work with Z Tapes, an independent web-based label run by Filip Zemčík in Slovakia, because they admire the previous compilations Z has released since 2016. They describe Zemčík as someone who “genuinely cares” about the music, regardless of its revenue – Port Lucian also contributed a track to Z’s Sampler 2020, and released their EP on Z in September.

According to Maidment, the process of connecting with artists was gritty and unpredictable, beginning with a troupe of “cold DMs” on Twitter. They contacted musicians from all over the U.S. who they thought might take to the project – some they knew from past Z Tapes releases, some from Philadelphia shows, but many were strangers. Soon, they got overwhelmed by enthusiastic responses from artists willing to share their intimate demos or to put urgent effort into new recordings for the comp. New Jersey’s Teenage Halloween even paid for studio time to record their cover of The Breeders’ “Drivin’ On 9,” and so many other acts went above and beyond Maidment’s expectations, too. Above all else, Maidment feels grateful “for all these musicians for trusting me when I have literally no track record releasing compilations.” Even more miraculous, Maidment only began contacting these artists around Christmas 2020, and they had the twenty-one-track album ready for release just two months later.

The Philadelphians on the tape include Carly Cosgrove, Harmony Woods, Highnoon, Buddie, 2nd Grade, AllegrA and Swim Camp, and the scene’s attitude permeates the whole release. Exposed, gutsy lyrics push through unease, misgivings and reconciliation, helping us feel small inside big cities and huge inside our bodies. From track to track, their delivery flies from hushed and prudent to misty, grooving, totally fearless and roaring into the wind, all a mess and all the more human for it. Really it’s arresting, the difference in effect between Carly Cosgrove’s towering Hotelier cover, AllegrA’s plucky “Parts of Me,” and Highnoon’s profoundly gentle demo, “Are You Doing Alright.” Listening from start to finish, the pervasive sound and style differences throughout the tape leave me mixed feelings of tension and freedom, as if it’s all allowed and natural – maybe even a feeling of responsibility, as if it’s me who needs to come meet the artists where they are.

A sense of separation is inescapable, as the artists are all embedded in their own places now. “Are You Doing Alright,” Highnoon’s Kennedy Freeman explains, they wrote alone in their bedroom and recorded like a phone call to a friend. “I was so worried about growing apart from people in my life, but sometimes it felt equally daunting to reach out and say hello,” Freeman says of the song. “It’s hard to catch up with people when there isn’t good news to share.”

2nd Grade’s Peter Gill recorded his honey-sweet cover of Joni Mitchell’s “All I Want” alone at home too, on a four-track tape machine borrowed from a friend, missing his band but making the best; Swim Camp’s Tom Morris created the comp’s only instrumental track while experimenting with his Yamaha PSR6 keyboard, also at home. And “Trains at Midnight” came from a demo self-recorded and overdubbed by Nicolle Maroulis of Hit Like A Girl, who also runs the nonprofit No More Dysphoria.

I’m thankful for the loudest moments of fellowship and togetherness that shine through the tape, especially the moments I got from Carly Cosgrove, Teenage Halloween and Buddie. “Take What’s Left (Demo)” brings lyrical highlights, beginning with the promise, “We could have oasis if we wanted to.” According to Buddie’s Dan Forrest, the song faces the dominion of “greed and political gains” in our century, but offers his optimistic take on responsibility, will, cooperation and redistribution.

After a few weeks of listening to the tape and learning about its contributors, I keep coming back to the music, and I dream it reaches far and wide. The release especially points to Bandcamp’s potential as a platform for global networking and even political organizing, and Maidment and I share a serious admiration for what the site has accomplished since last March. After one year of Bandcamp Fridays, Trans Musicians & Allies For Change may be the most thought-provoking project I’ve discovered here yet, and I have hope that streaks of solidarity like this will outlive America’s remaining pandemics.

Trans Musicians & Allies For Change has already generated thousands in donations to Trans Lifeline, and it earned praise from Audiofemme, Stereogum, and even Tegan and Sara, which Maidment said all came as a “total surprise.” Inspired by this enthusiastic reception, they say they are already considering plans for a sequel compilation.