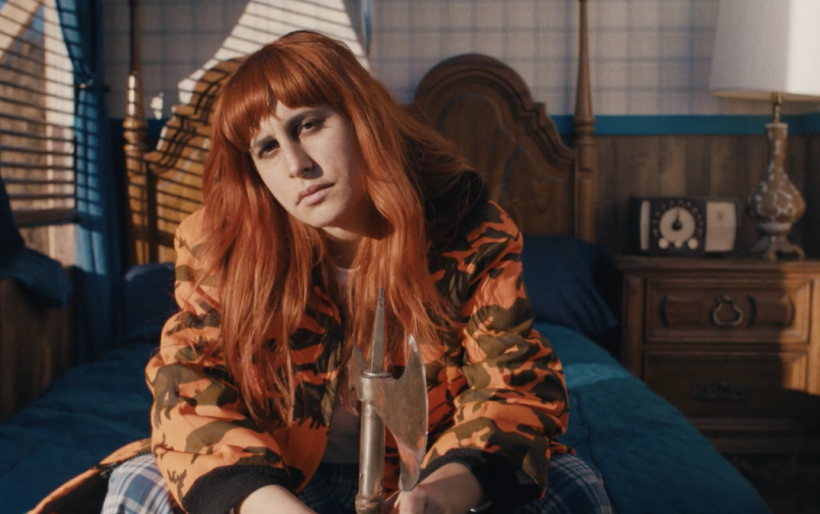 How many times over the past 12 months have you felt like the walls of your home / apartment / bedroom were closing in on you? The year of COVID has been an emotionally taxing one, and would have been even if there hadn’t been a global pandemic keeping us mostly indoors — and for many, without our livelihoods, our certainty and security about the future. Sometimes it’s all you can do to scream into the void.

That’s the feeling channeled into Mannequin Pussy‘s brilliant new song and video, “Control.” Shot in a grassy corner of south Philadelphia’s FDR Park, the video finds singer-guitarist and songwriter Marisa Dabice in a tiny, freestanding bedroom, going through the gamut of emotions many of us have felt.

We see despair as she sits on the mattress and gazes out of Venitian blinds into the field, singing along to the melodic punk anthem. We see rage as she leaps to her feet, thrashing around the room. And we see catharsis as she grabs and axe and a sword from the walls and lays waste to the space keeping her locked in. (Back in the fall, Dabice used Mannequin Pussy socials to ask if anyone had a sword she could use, didn’t specify why, and folks were generally like “Cool!” That’s the kind of year this has been.)

The video was directed by Dabice, and her crew included DP Drew Saracco, editor Hunter Seide, with the set built by Hanna Hamilton. And the song will be featured on Perfect, a new EP that Mannequin Pussy will release on Epitaph Records on May 21st.

The EP finds them teaming up once again with producer Will Yip, and was very much an in-the-moment release for band and producer alike. “We just figured if we forced ourselves into this situation where someone could hit ‘record,’ something might come out,” Dabice says. “We’d never written that way before.”

Pre-order the project here, and watch the “Control” video below.