Back To The Bell Tower: How a burst of pandemic creativity brought Verbatum Jones out of hiatus - WXPN 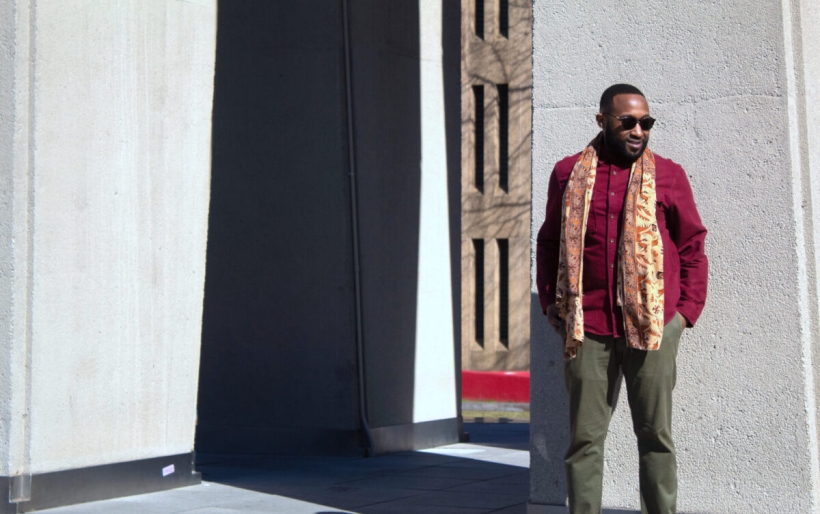 Back To The Bell Tower: How a burst of pandemic creativity brought Verbatum Jones out of hiatus

It’s seldom that you come across a person with a personality that is so kind and joyous that it’s infectious. Where one conversation with them leaves you feeling like you want to be a better person. If you ever had the privilege of meeting Verbatum Jones (Verb for short) then you know exactly what I’m talking about. And if you haven’t, well, I hope you get to experience him for yourself…or at the very least his music, because his bright and optimistic self shines through his songs.

Verb began rapping when he first began attending Temple University in North Philadelphia. To get to his philosophy class, Verb had to walk past the iconic Bell Tower – which, if you’re unfamiliar with the Temple landscape, sits smack in the middle of campus. It’s not really used for anything other than a hangout spot or meeting place. And if you know anything about the recent history of the school, or hip-hop in Philly, you would know this is where rappers from all over the city, enrolled in Temple or not, came to test out their freestyle chops.

“I walk over to this jawn and I’m ready to laugh and chuckle at their bad raps,” Verb reminisces. “And I think I stood there for like three hours and watched these guys beatbox and rap. It blew me away. Mic Stew, God bless his heart, he was like, ‘Hey, you’ve been standing here for a minute. Like, you should spit something.’ And I was like, ‘I don’t know, bro. I don’t really like it, I’m not a rapper. I don’t rap.’ And he asked me what my name was and of course, all my name is Verb. And he goes ‘that’s a rap name, you gotta rap.’ And that’s how that’s genuinely how it started.”

Since that first day at the bell tower, which was followed by many more, Verb has released three albums; (Verb.), (.Winter), and his most recent release, Sonflower. Verb began working on Sonflower as something to do during quarantine; before this point, he wasn’t particularly interested in releasing any new music. Throughout his career, he has never really felt pressed to put out new works, but did so when the vibes were right. This time, a bit of pandemic creativity and a nudge from his cousin, DJ Tank Top, was the spark that set off Sonflower.

In the seven years between the release of (.Winter) and Sonflower, Verb found himself in an identity crisis of sorts. The spiritual community that he spent most of his life in was not fond of his choice to grow his hair long into locs. As he describes, Verb was “socially shunned” at his church because of this decision.

“It was difficult for me to rap and make music, and make songs and try to promote positive, spiritual, upbeat music,” says Verb. “I was trying to preach to them when I didn’t feel the spirit myself.”

That experience, plus his sentiments towards being an artist, made the hiatus an easy choice.

“I never felt the pressure to keep going. Cause I, I was happy with the success that I was getting, but I never necessarily expected anything from it,” says Verb. “I was struggling and trying to find my footing as a young man, as a man. I didn’t know what I was doing. And so music, to me, it was like in the back of my head, it was, it was not present at all. And funny, I say that, but I was writing the whole time.”

Over the seven years of the hiatus, Verb spent his time writing poetry, raps, jokes, and more, just not recording. It wasn’t until DJ Tank Top started a recording label called Common Sense Music and encouraged his cousin to record some music for fun and at his own pace. At the tail end of 2019, Verb began making trips up to Long Island to record the raps he wrote during his sabbatical. Once the pandemic hit, his desire to complete the project was in full swing. The pair often traveled back and forth to DJ Tank Top’s spot in New York, and Verb’s place right outside of Philly. Before they knew it, Sonflower was complete.

“I realized that a lot of the stuff that I was writing a year prior, two years prior was so, I think present, it was so on time,” says Verb. “Like ‘Hold On’ – It’s probably my favorite song. It’s about waiting until you can connect with people again. And so when we started recording and I started adding more lyrics to it and adding more bars to it, it just, it just fit in the moment of COVID.”

With “Hold On,” Verb got quite vulnerable. In the song, he reflects on being isolated in a global pandemic, a tumultuous season with his girlfriend, and missing being able to fellowship with loved ones. Like most of his track, there is a glimmer of light in hopefulness that we’ll make it out of this, and we’ll be better to each other for it.

“When it was recorded, people were really struggling. I think this was the first type of isolation that the majority of us had really ever felt to this degree, right. All your, all of our creature comforts were gone,” says Verb. “One of the lines is like ‘after this, I’ll take every hugging kiss.’ I used to be so weird about hugs, now I can’t wait to be crying at the function and, and carrying on and doing stuff with people.”

Another standout track on the album is “Presidente,” where Verb waxes poetic on what he’d do if he had the chance to become president. On the track, which is a nod to Wyclef’s “If I Was President”, muses on providing universal health care and police reform. The hook, which is a riff from the aforementioned Wyclef song goes:

If I was President, I’d get elected on Friday,
Assassinated on Saturday,
Buried on Sunday.
Then go back to work on Monday

“Being Black in this country, that’s what it was like – I’ll have to watch people die, watch them get killed and then get up and just keep doing it over and over” says Verb. “That’s another one of my favorite songs because it says ‘I see what we’re going through. This is how I think we get how we can fix it. And also even if I tried, I have to admit that in this country, my life could be ended and we all got to just keep going.’”

What‘s next for Verb? Well, his biggest goal is to release a music video. He’s released a few here and there but he plans on having a larger budget and a fully fleshed-out concept for the next one. Verb is also super jazzed at the idea of getting back to doing shows.

“I’m feeling like I want to get people together,” he says. “I want to perform. And then new music will come from there.”