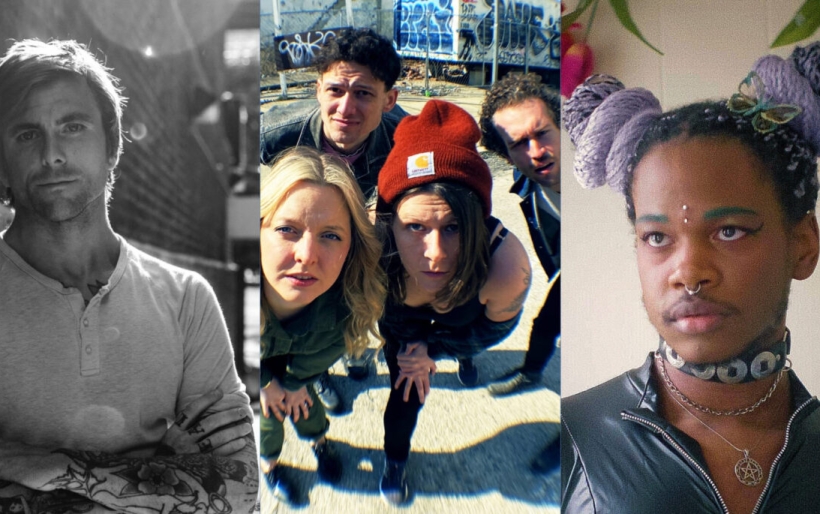 Eight releases from Philly artists to pick up this Bandcamp Friday

It’s the first Friday in April, and it’s once again Bandcamp Friday — the day that the independent digital music platform waives its fees and directs 100% of all sales directly to the artists. It’s a great day to go on a shopping spree supporting independent musicians, and supporting your local music community, and here are eight projects from Philadelphia-rooted artists to get your day under way.

For better or worse, that is the name of this epic new project by Doylestown’s Anthony Green, frontperson of alt-prog / cosmic punk luminaries Circa Survive and Saosin, who also maintains a well-regarded solo career. Green teamed up with Adam Lazzara and John Nolan of Taking Back Sunday, as well as Benjamin Homola of Grouplove, on an EP they describe as “The Beach Boys for the nihilist Tik Tok generation.” To my ears, it sounds like this group of modern rock buds having the best time channeling some explosively trippy Jane’s Addiction style energy — Green’s vocal register being not dissimilar from Perry Farrell’s helps here — and though the full EP is not out until June 4th, pre-orders are available now, and 30% of all sales go to the North American Independent Venue Association, the advocacy group behind the #SaveOurStages act that’s helping shuttered clubs maintain during the COVID shutdown.

“Don’t Touch Me” by Grocer

The the latest from South Philly indie rockers Grocer is a heavy one. Bassist and vocalist Danielle Lovier tells us over email that “Don’t Touch Me,” the second pre-release track from their new EP Delete If Not Allowed, was written “as a way to cope with a situation I never really dealt with from a few years ago.” Opening on the cutting phrase “you’re not sorry for what you did, you’re sorry you got caught,” the song swells and swirls in dissonant outrage, propelled by a cathartic takedown of a fellow musician whose abusive behavior is no impediment to their career (“It seems like you’re doing better now / I know because I read about it in your press release”). Proceeds from the track will go to RAINN – the Rape, Abuse, and Incest National Network, the nation’s largest anti-sexual assault organization.

“Lose to Win” by Shamir

Philly-based multi-genre multi-instrumental singer-songwriter Shamir has been a reliable source of Bandcamp Friday exclusives, usually in the form of snappy singles that disappear in 24 to 48 hours. His latest, “Lose to Win,” rides a grimy distorted bassline and a drum machine beat, as Shamir sings about forward momentum and navigating your way through the obstacles life throws at you: “Going fast on a bullet train, happiness is one ride away / Then you crash trynna find your way, but you’re not ready for the end.”

Flowers by Strangepride and Anika Pyle

Singer-songwriter Anika Pyle took an opportunity this Bandcamp Friday to link up with one of her old bandmates: Anthony Tinnirella from Katie Ellen, who these days performs as Strangepride. On her Bandcamp page, Pyle writes that she and Tinnirella missed making music together, they both lost parents in recent years, so in classic punk split single fashion, they covered one another’s songs ruminating on the topic. Tinnirella recorded a version of Pyle’s “Orange Flowers,” written about her father and released on this year’s Wild River, and Pyle interpreted the Strangepride standout “Daisies And Blue,” written about Tinnirella’s mother. Proceeds go to Nurses House, which supports frontline healthcare workers across the country. “God knows this pandemic is not over and no one in this profession should be left wanting for any kind of help they need,” writes Pyle.

Philly musician, photographer, writer, and Key contributor KooF has produced an impressive array of releases for Bandcamp Fridays during the pandemic, from breathtaking singles to heady improvisation sessions. This year found him stepping back from trumpet, his primary instrument, and exploring new territories like synthesizer soundscapes or, on this month’s release, spirited ukulele jams. Uke, Oof! is five tracks long — some solo, some with beats — and ranges from sprightly melodies to contemplative meditations.

Johnny Kilgore is the lead guitarist in the Berks County alt-country vets Frog Holler, and La Overtoner is his more recent solo project. It takes a more gripping alternative rock turn, reminiscent of Grant Lee Buffalo, and the project’s debut LP Adrift is the product of three years of work by Kilgore and a crew of friends and collaborators. (Philly folk scene luminary Brad Hinton is one of those guest musicians, contributing lap steel and vocals.) There was a lot of soul-searching along the way, Kilgore writes: “Should I bother? Should I let it drift into a lost consciousness never to be heard by anyone but me on my demos? I definitely considered it… But I loved the songs and wanted to let it be heard.” We’re thankful he stuck with his path.

Philly producer and songwriter Savan DePaul shifts back and forth from spacey hip-hop to experimental electro-pop, and this Bandcamp Friday, they take the latter route in a new song by their Ishtar Sr. project. “Technomancers” races to a cumbia-style rhythm through a supernova of synth sound and supernatural science fiction mythologies. It’s surreal, serene, and somewhat certain to get you on your feet.

Split the difference between Guided By Voices punchy, economical pop songs and Weezer’s sunny fuzz rock, and you get South Jersey four-piece Cabana Wear. The band’s lively Cape Weather EP, released last year, gets a new 7″ edition for our second pandemic summer, and Bandcamp Friday is an ideal day to put your order in.