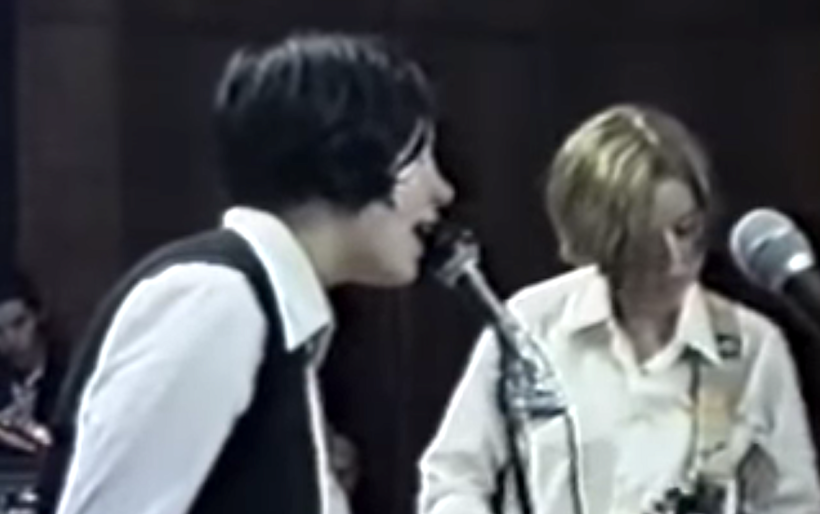 Sleater-Kinney at the First Unitarian Church | still from video

“It was a really fun time,” Sleater-Kinney‘s Corin Tucker reminisced of the band’s early touring days in this 2010 interview with Verbicide Magazine‘s Casey Boland. “We would get any show we possibly could; we would hope people would like us. When you’re in your 20s, that’s a great time to just go out on the road everywhere. You’re ready to do everything and meet everyone. It was fun, it was wild.”

In the case of the band’s 1996 tour in support of their second LP Call The Doctor, that rings particularly true. In the interview, Tucker was responding to Boland’s question about a bootleg video circulating the web that shows the band playing their song “Sold Out” at Bryn Mawr College. As it happens, this video was from their second Philly-area gig of the day; a tour Wiki indicates that they also performed an afternoon show at the First Unitarian Church on April 6, 1996 — 25 years ago today.

In 2021, these shows exist as raw, noisy bootleg clips that nevertheless capture the drive and spirit of a singular rock band on their first large-scale excursion outside their Pacific Northwest home base. S-K’s drummer in these videos was Toni Gogin, who did not appear on any studio releases (Laura Macfarlane was behind the kit on the Doctor studio sessions) and seemingly only performed on this tour, as the band’s longest-running drummer, Janet Weiss, joined later in the year.

In a video of the Church show, Carrie Brownstein takes the lead on “The Last Song” from Sleater-Kinney’s self-titled debut; she and Tucker face one another, trade licks, and shake with energy. Brownstein’s voice raises from a pensive melody to a punchy scream, and the nonplussed person standing side-stage with their arms folded is inspired enough to play some windmill air guitar as the song peaks.

Where the video of the Church show is loose and cathartic, the Bryn Mawr performance of “Call The Doctor” feels almost imposing. The song is a terrific, explosive build from a very fast and frantic opening to an even wilder crescendo; the band delivers this by standing in lock-step formation for the first half of the song, then breaking loose when it comes to a head at the minute-and-a-half point.

Following this double-shot of shows, Sleater-Kinney headed south to play The Black Cat in D.C., and then north to play Other Music in New York. Other stops on this spring ’96 run range from universities like Hampshire and Yale to places with names like “Bryce’s House.” The band recorded their breakout LP Dig Me Out that winter, went on have to a prolific and wildly influential career…and, pandemic willing, might still be performing at The Mann Center this August with NNAMDÏ and Wilco? Fingers crossed.