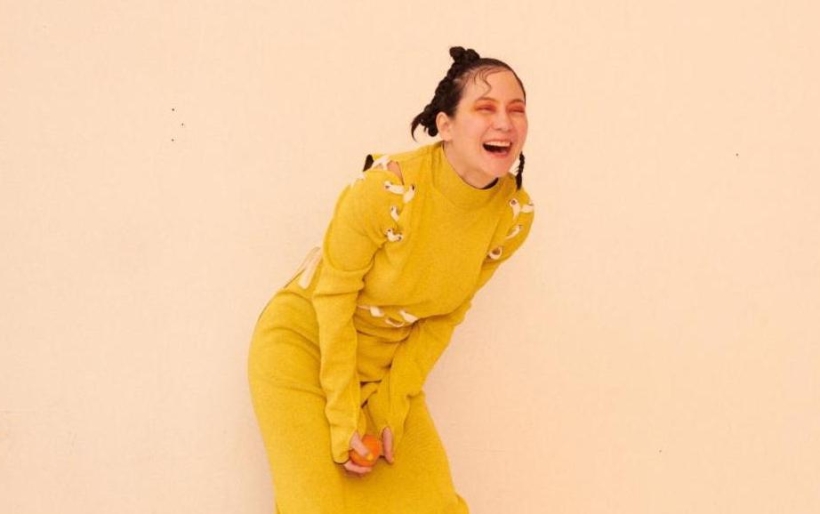 Japanese Breakfast yearns for connection on new single and video, “Posing In Bondage”

In an otherworldly music video for their latest single, Japanese Breakfast explores loneliness and connection in the dim lights of an empty supermarket.

The song “Posing In Bondage” is a simmering synthesizer burner: subtle and contemplative at the outset, then shifting moods at the midway point when a jerky, jubilant rhythm reminiscent of Tears for Fears’ “Shout” enters the fray. The song’s energy runs a dynamic range, but the sonic undercurrent is somewhat nervy, which plays tremendously into the new music video, directed by frontperson Michelle Zauner.

Set at Super A Foods in northeast Los Angeles — a possible homage to A Star Is Born, or maybe just a striking midcentury modern building — the video finds Zauner entering the store late at night on a hoverboard, wearing a wing-shouldered blouse, face smeared with blood that never gets explained, and raiding the orange juice refrigerator. She proceeds to bond with the store’s lone attendant, played by Girlpool’s Harmony Tividad, sharing a cup of instant noodles and riding around the aisles as Zauner sings about closeness and proximity.

“When the world divides into two people
Those who have felt pain and those who have yet to
And I can’t unsee, it although I would like to
Posing in bondage, I hope you come home soon.”

Zauner expanded on the song and video’s themes in a press release:

“‘Posing in Bondage’ is a ballad about loneliness and longing, a song about two people who want so badly to connect but are never quite able to do so. No place felt lonelier than an empty grocery at 1 a.m.”

The song is the second single from Japanese Breakfast’s new album, Jubilee, due out June 4th on Dead Oceans Records. Michelle Zauner’s memoir, Crying in H Mart, is also on the horizon, releasing later this month, via Knopf Books. And as the end of the pandemic nears, tour announcements are beginning to trickle in, and Japanese Breakfast is among the first artists to announce a new show at Union Transfer, where they’ll kick off tour on Saturday, August 7th.

“We are quite hopeful to welcome everyone safely back to Union Transfer with our good pals Japanese Breakfast!,” says the announcement on the UT website. “However, if city or state regulations do not allow us to re-open in August, we do have backup date(s) reserved for later in the year. Let’s cross our fingers, hands and toes, and everybody go get vaccinated!”