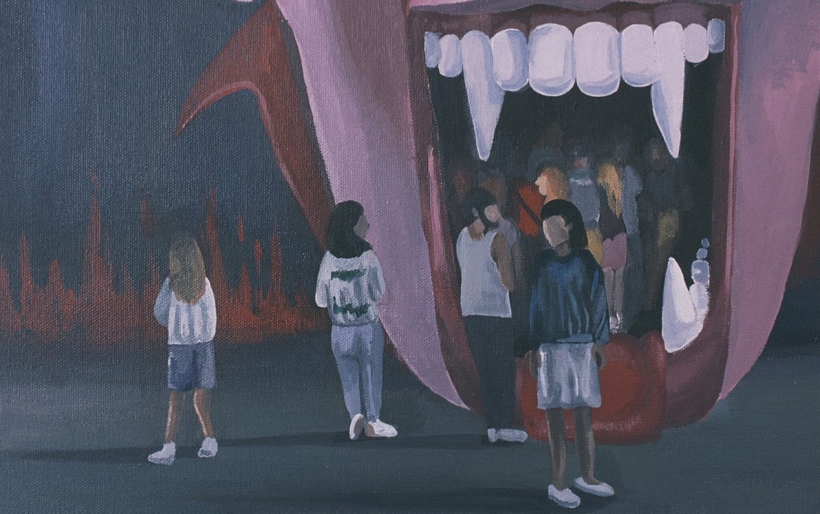 Spirit of the Beehive | cover artwork by Rivka Ravede

Spirit of the Beehive find new life on Entertainment, Death

Spirit of the Beehive have the quality of a fruit that’s hard to eat: a mango or pomegranate, one that forces you to dig around the rind looking for bits of edible meat. Paradoxically, those are often the best kinds of fruit. Something about the effort and intentionality of eating one brings you closer to the fruit itself, touching a very primitive desire to consume.

On Entertainment, Death, Spirit of the Beehive are more aware than ever of this desire among their listeners. Their music is mealy and tantalizing at times, but worth it when a groove drives in just right. And just as quickly as it lands, it’s taken away. To fully appreciate the spectacle laid out here, you have to dig in and give it time, but it’s worth it for the way the songs can envelope you in their nuance.

The band is leaner than they’ve ever been as a trio, including original members Zack Schwartz and Rivka Ravede, and relative newcomer Corey Wichlin. This is their fourth album but their first for Omaha-based label Saddle Creek. The phrase “your favorite band’s favorite band” has become a cliché, but for fans of Mitski that’s true. “They would make weird soundscapes,” she said of Spirit of the Beehive, speaking with Amoeba Music, “but then suddenly open up to a super-pop melody that you can sing along to, and then go back to weird. I think it’s very beautiful.”

Wichlin, as a multi-instrumentalist, may be the force behind the dystopian synthesizers that speckle tracks like “THERE’S NOTHING YOU CAN’T DO” or “WRONG CIRCLE” (all the song titles on Entertainment Death are, for whatever reason, rendered in all caps). The electronics on this record recall the likes of Boy Harsher or Oneohtrix Point Never, and one can draw easy comparisons to other Philly mainstays like Alex G and Palm.

The group admit their songs may be difficult to discern meaning in, given their stream-of-thought approach to lyrics and their scrapbook-esque sound – every track is a mix of instruments, found sound mostly from vintage commercials, and vocals that are often distorted beyond recognition. The album almost lives within a ProTools session, it seems; you can imagine blocks of audio speckled in no predictable order like post-it notes on a messy workspace, tied together by more coherent throughlines of droopy guitars and phrenetic drums.

In a year without live performance, it seems fitting that Entertainment, Death would almost be impossible to take to the stage in a way that “captures” the same encompassing design of its tracks. Typically, when a sound is described as “dreamlike,” one might think of Alvvays or Mazzy Star – the sort-of hazy, Dorothy-in-the-poppy-field experience. That applies to Spirit of the Beehive to an extent, but you might also think of the banal dreams where you have wordless conversations, a vague sense of unease, and remembering something from one second to another is difficult. In the process of writing this review, I’d wake up in the morning with melody from one of these songs stuck in my head, with no idea how it fit into the dream I had just left.

This might stem from a previous habit of listening to Hypnic Jerks (a term used for the falling sensation you can get just before falling asleep) while riding the subway to work. To have that space and time to focus in on the album – albeit crunched into cheap headphones and drowned out by the typical car rattle – reinforces how their sound is perfect for delving into and letting yourself become distracted.

Spirit of the Beehive occupy a hazy place in my mind – a band I’m more inclined to call a “collective” to indicate both their changing lineup, but also that I’m never really sure what they sound like. This album accomplishes more of what they do best: it takes styles you’re familiar with, splices them together in ways you no longer recognize, and makes you realize those too are wonderful. At times it is ground-breaking or insanely exciting, other times it can be frustrating; that mix is just unpredictable enough to keep you absorbed. Entertainment, Death’s crucial comma seems to recognize that there is a step-by-step process for life: entertainment until death.

Spirit of the Beehive’s Entertainment, Death is out today on Saddle Creek Records; grab a download or order a physical copy at the label’s website.