Welcome To The Locals: B-Eazyyy - WXPN 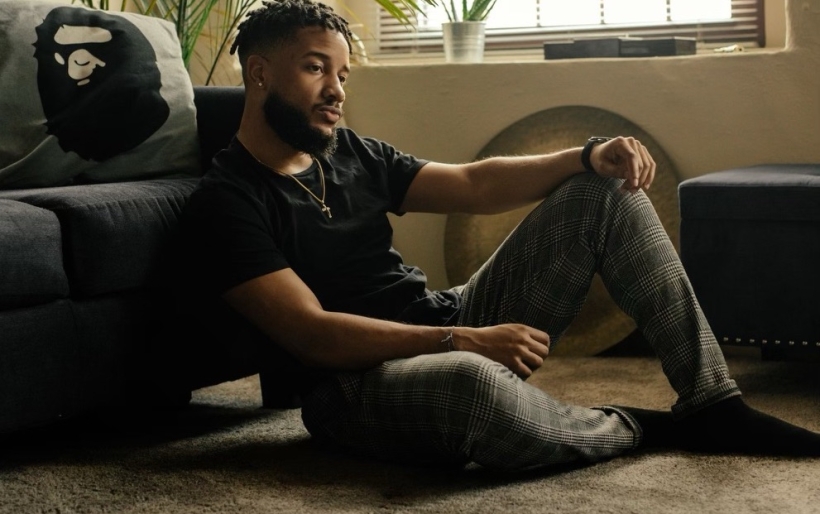 Welcome To The Locals: B-Eazyyy

Welcome to the Locals is a regular series by XPN host Rahman Wortman where he introduces a new Philadelphia-area artist to the listeners of the XPN Local Show and gives them their first airplay. This episode, he’s welcoming hip-hop artist B-Eazyyy.

Since watching his mom sing background vocals for Kool and the Gang and writing his first rhyme to The Fugees “Killing Me Softly” instrumental, the New Jersey MC B-Eazyyy was destined be creative through music. His music journey showed him how his creativity could be a way to express how he was feeling inside.

During his time at Temple University, he created a mixtape called Ezekiel; like a lot of rap content, it was very boastful. However as B-Eazyyy grew, his music became more personal, especially on his EPs Manifesto and Reign. For instance on, “Reign / I Still Love You,” the Garden State MC opens up about the difficult relationship he has with his father.

I recently was able to welcome B-Eazyyy to The Locals. We talked about many things such his early stages as an artist, his transition to being transparent with his music, how the holistic ritual of sage helped get himself together and inspired his new single “Sage Music” and how he takes pride in free flowing sound that comes from his home state.

Welcome To The Locals – B-Eazyyy

…on his earliest memories of being exposed to music.

My mom sang background vocals for Kool and the Gang. She used to be a professional singer, so growing up, my mom would literally have me with her at all her gigs and performances. She would have open mics, little events, singing the national anthem, And I’d be the kid harassing her for a snack. [laughs] So it’s always been in my blood. After that, my older cousin, he rapped too, so he kinda showed me how to put together bars. And the rest was history: I started writing poetry around 8, and it turned into music after seeing artists on TV like Nas and 2 Pac.

…on his music becoming more personal and vulnerable over time.

With Ezekial, I felt like I had to sprinkle a little bit of my story but also appeal to what I thought was cool around the time. Also, that mixtape was 20 songs or so, and times change, people aren’t looking to hear a full project like that anymore. So Manifesto was an EP, and I felt like if I put a lot of my story into those few songs, I’d be able to connect with people.

With the Reign EP, I hit a downward spiral as far as depression. It’s hard because when you’re in that space creatively, a lot of people are not in that space to receive. They have to have been there, or they have to understand. And a lot of people don’t want to touch that energy, or they feel sorry for you, so they can’t really indulge into the sound. After coming out of that, I got to where I am now with a lot of growth, healing, prayer, and a lot of changes.

…on the new single “Sage Music,” and how burning sage impacts his creative process.

The first step of me getting out of my funk and my depression and the bad stuff I was going through was sage. I had a lot of family things going on and I started burning sage, because I couldn’t take on everybody else’s problems. I had to cleanse my whole house, I had to cleanse my whole space. It’s crazy because it started affecting my mom and everyone around me. Then it started affecting my spirit. And I started feeling a lot lighter and a lot more capable of dealing with stuff. It helped me heal it helped me free a lot of bad energy. And that’s when the writers block lifted and I started flowing. I felt “this is the beginning of my new journey.”

…on the pride he takes in music from New Jersey.

Moreso our sound. It’s moreso free flowing. Jersey artists, no one can compare them to anybody. When Lauryn Hill came up, no one sounded like her, she was doing her own thing. When Queen Latifah came up, no one sounded like her. When Redman came in. [people said] “His pattern is different, his flow is different, his charisma is different.” I’m not comparing myself to any of those greats, but I feel like I don’t sound like other artists out there.

And Jersey, in our own state, we have our own identity because we have a mix of everything. We can go up to New York real quick, we can go down to Philly real quick, and we have the beaches right there, all the ocean. So we have a different type of energy that affects Jersey. It’s a melting pot of creativity.