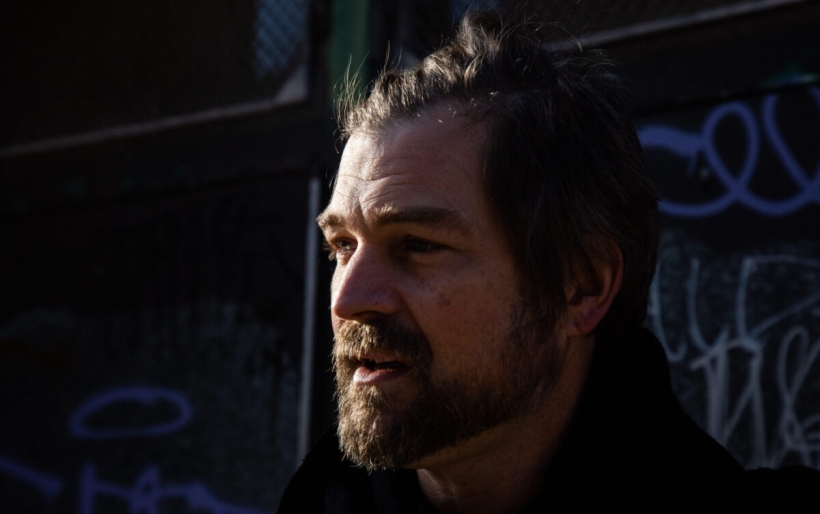 In the music of Karl Blau, grunge and grace resound together. I hear traces of a distinctive Seattle sound, but there’s also elegance in that voice, gentle when it peaks in baritone, noble when it dips to bass. With that voice in my ear, I’m not surprised Blau feels at home here in Philly, a town with as much grit as whimsy. When, two years ago, he and his family moved from Anacortes, WA, he started a street art project that seems native to Philadelphia: #trashiondollstakes our city’s grunge and makes it elegant, giving litter slender limbs, dignifying tossed foil and latex gloves with silhouetted faces.

Street art, particularly in its flagship form of graffiti, inherently takes something inelegant—a dumpster, an overpass—and turns it into something worth looking at. Blau came east because he was taken with the Germantown neighborhood. During a Philly tour stop, fellow singer-songwriter Birdie Busch walked him around the village, and it was then that he first came across the work of a graffiti artist called Nomad.

Nomad’s signature tag is a face. It’s painted all over Germantown, on utility boxes, telephone poles, blank walls, and it’s often accompanied by succinct calls for social change: “Black is Beautiful.” “Buy Black.” “Stop Gentrifying this Jawn.” In this interview, we talk with Blau about his relationship with visual art and his encounters with this ubiquitous face, which has become the musician’s favorite artwork in Philly.

The Key: How do visual art and music interact in your creative practice?

Karl Blau: It’s a very physical thing, making music. When I’m recording, I’m often standing and moving. I paint and draw the same way. I’m in the moment, creating something that’s surprising to me, something from inside that I’m pulling out, and it’s a kinetic practice. I think that’s the connection—the physicality of both forms.

TK: You use zines as a way to stay connected with your audience. Can you tell me about the “Mutable” zine project?

KB: It’s still coming into focus. I have all of these things going on besides music that I want to document and share: My interest in the spirituality of physics. The poetry I’m always writing on scraps. Visual elements, like the #trashiondolls. The first issue of the zine featured different poses of rubber gloves—a personification of trash that I found in the street. Ideas on music, thoughts on recording. I want a place to collect all of the ideas I have, and to package and share them.

TK: Is there a particular space in town where you look for visual inspiration?

KB: I’m inspired by my neighborhood, Germantown. The fashion here is off the hook. The colors, the monochromatic suits, the mix of casual and flared-up styles. The neighborhood’s stone buildings are really pretty. We take a lot of strolls down Kelly Drive toward the Art Museum, and there’s symbolism in moving toward the museum and back. The museum itself is a huge inspiration to me. The whole corridor feels magical.

TK: What is your favorite artwork in Philadelphia?

KB: The work of a graffiti artist in Germantown who goes by Nomad, who’s on Instagram as @nomad_face. Their work communicates a message, pointing out inequity. A lot of graffiti art is like that. Something really ugly is going to get tagged—the ugly things people have to look at everyday, the things that remind them of inequity. Put a stamp on it. Put a red flag on it. Tag it. It’s a federally criminal act to tag, but at the same time, corporate people can create these eyesores that everyone has to look at everyday, and they profit from it. So in tagging there’s a constant conversation.

Any time a Nomad face pops up, the block instantly goes up in value in my brain. It’s more beautiful. It’s a beautification process in reaction to the inequity of things. That’s a really important conversation. It makes me think harder everyday as I walk around the neighborhood.

TK: What do you make of the fact that Nomad’s signature tag is a face?

KB: To me, it’s a mirror. It’s looking back at you and it’s shifting your perspective. You’re confronted with yourself.

TK: Has Nomad’s work influenced your own art-making?

KB: The conversation about equity has influenced what I’m working on now. It’s on my brain as I’m creating songs. In general, I’m getting in touch with myself. Again, that mirror. That’s the best way to make changes, as it’s been put many times before: make yourself a better person by finding out who that person is.

TK: What are you working on now?

KB: I’m excited about a really special project. Chris of Chet Delcampo and John from Heyward Howkins have teamed up with a couple of guys from the War on Drugs, Robbie and Charlie, and they created these songs and presented them to me to put a voice on them. And this guy Chris Madi is a wonderful producer. We’re putting the finishing touches on four tunes. We’re really excited to share those in a couple of months. Then I’m working on a new Karl Blau record with the producer Tucker Martine, who produced Introducing, the cover record I did. It’ll be a kind of greatest hits of Karl Blau, reimagined through Tucker Martine.

In a way, my work is kind of a Nomad face. It’s the same face over and over, but each time, I’m trying to go a little deeper, keeping that curious voice alive.