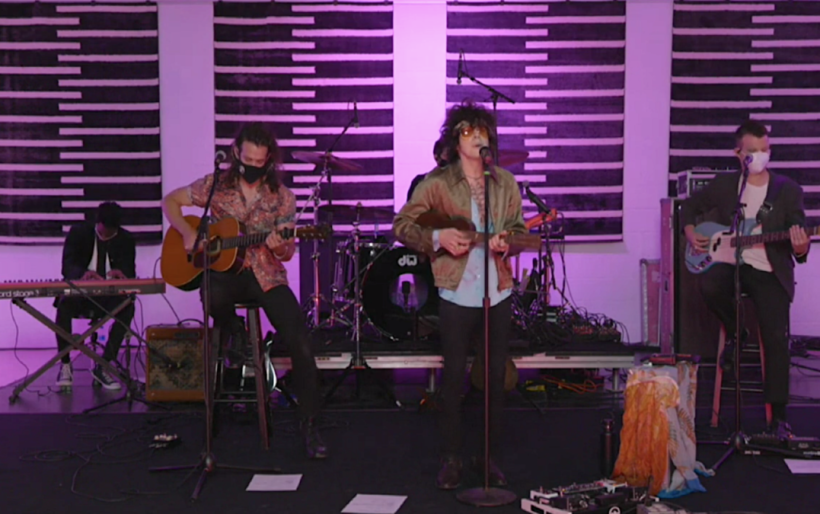 It was 9 a.m. California time when today’s Free at Noon concert got under way, but LP and her band — performing live from North Hollywood’s Valentine Recording Studios — didn’t miss a beat.

Opening on the jaunty “Girls Go Wild” from 2018’s Heart To Mouth, they delivered sunny west coast pop on west coast time, calling to mind everyone from Fleetwood Mac to Jenny Lewis and HAIM. “Hope you’re having a nice time driving, or whatever you’re doing,” said LP on a break between songs; she wasn’t much for chit-chat during this set, but the musical side of the show was totally on point.

One of LP’s newest singles, “How Low Can You Go,” followed in the set and moved at a slower and slinkier pace, with nervous lyrics (“I couldn’t stop thinking if I was okay”) offset by a playful vibrato whistling outro. “The One That You Love” was a melancholy waltz with massive delivery on the chorus, LP twirling her mic and singing “I’m really trying hard but I don’t understand”; the song is a moving reflection on living up to another person’s needs and expectations, and accepting when you cannot do that.

The set wrapped with another new single, the piano driven “One Last Time,” which swayed to mellow country and western tones, and the jaunty closer “Lost On You,” the title track from LP’s 2016, um, LP.

Album number six is expected to release later this year. In the meantime, watch today’s full Free at Noon performance below, and check out the virtual Free at Noon archives here.