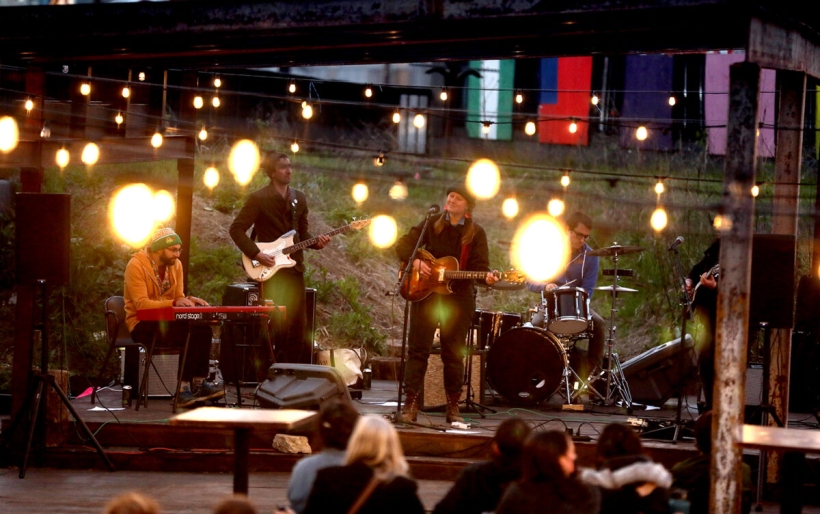 While we gradually ramp up to the (hopeful) return of concerts this fall, Sunflower Philly is shaping up to be one of this summer’s best hangs for music lovers. The outdoor shows I’ve seen so far in its huge, limited-capacity space have been tremendously positive events; the endorphin rush of in-person live performance that’s been missing from our lives is very much welcome, and the grounds are large enough for attendees to keep their distance from everybody else, whatever your comfort level.

Some folks at Birdie Busch and Karl Blau‘s recent performance opted to stand outside the space and listen to the show from the sidewalk overlooking Sunflower, where everything sounds just as good and is perhaps only slightly obstructed visually by the frame of the stage. At which point you can just close your eyes and drift away to the music.

Blau was joined by pedal steel player Zena Kay on Friday night, April 23rd, and their set of dreamy country tones cast a contemplative stillness across the scene, broken only by the joyful shouts of musician’s kids darting back and forth in front of the stage. (Compared to Sunflower’s opening night starring Dominy, which felt like a raucous bar hang, this was relatively chill and family-friendly.)

Busch’s first full-band performance in a couple years took the baton on this mellow note, and gradually amplified over the course of an hour-plus performance. Busch smiled at the kids, who were still very active, and joked around about the schoolyard-like setting; later, when some kids attempted to scale the wall of Sunflower, she offered an earnest apology to parents. Her band of Ross Bellenoit on guitar, Jonas Oesterle on drums, Todd Erk on bass, and Jaron Olevsky on keys hit a locked-in stride on their cosmic cover of “Wild Mountain Honey” by Steve Miller Band, amped it up on “Far From The Tree” from Birdie Busch and The Greatest Night, and closed on a high-energy “Hold Ya” from Busch’s 2006 classic Penny Arcade.

Tickets and info on all these shows can be found here. Check out more photos from Birdie Busch and Karl Blau’s show below.