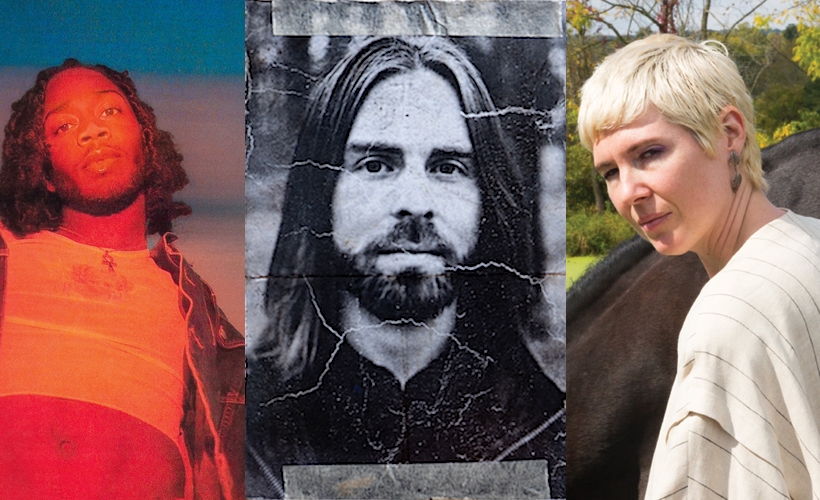 Twelve releases from Philly artists to pick up this Bandcamp Friday

There’s a lot of Philly-regional goodness to look for this Bandcamp Friday — that wonderful day once a month where the digital music retail platform waives its service fee for 24 hours, directing all sales to the pockets of artists (and in some cases, their affiliated indie labels).

Yesterday, our Yoni Kroll gave an initial rundown of notable Bandcamp finds from the punk-adjacent underground in his bimonthly Skeleton Key column. Start out with those as you put together your shopping list, and then peruse the catalog of Get Better Records, which is donating $1 from each physical sale to Give India to support COVID relief efforts. To really dive in, explore Bandcamp’s Philadelphia tag, or check out our top-tier recommendations below, which range from cosmic pop to folk to electronic jams and gritty indie rock.

Though we’re seeing a light at the end of the Corona tunnel with a stream of in-person concert announcements rolling out the past few weeks, we are still very much in a global pandemic, and with artists still unable to make money from gigs and touring, Bandcamp Friday sales have proven to be a lifesaver, getting many of of our favorite local musicians through the past year. Let’s pitch in, shop local while buying digital music, and let our playlist fodder help them make it through the next few months.

One of Philly’s best and most unique vocalists, AnnonXL released his most expansive project to date at the top of last month. While the pop-leaning singer-songwriter’s music has previously lived on Spotify and Soundcloud for the most part, Stupid Cupid is his first to land on Bandcamp. It goes big, with atmospheric production that sound like a killer album being played in outer space while big beats pull it back to Earth. Meanwhile, Annon’s vulnerable, personal vocals and lyricism reflect on love, interpersonal connections, and most significantly, self-identity.

When he’s not working as Jill Scott’s touring guitarist, Ben O’Neill makes the kind of music he started out with on the Philly scene years ago: introspective, acoustic-forward pop that’s full of warm melodies, emotive playing, and observations about life. The new single “After All” is a teaser of his new Light Vol 1 album, and is a meditation on the challenges of life and the drive to get through them: “Keep on pushing,” he sings on the opening line. “You’re almost there.”

No Medium by Rosali

Philly-rooted singer-songwriter Rosali moved to the midwest last year, and now calls Michigan home, but still very much maintains local ties with her wonderful third LP No Medium, out today. It was recorded locally with psychedelphia luminary Quentin Stoltzfus of Light Heat, Mazarin, and Azusa Plane, and employs a lot of Philly players in Rosali’s band. Most significantly, she uses the songs as a vehicle for exploring dark themes — “loss, death, sexuality, self-sabotage, and addiction” per the Bandcamp description — with breathtaking elegance and grace.

Be Your Own Peace by mannyroach

Surreal and serene, Philly multi-instrumentalist and beatmaker mannyroach is an oftentimes collaborator with folks like Orion Sun — you can hear him on the song “Sailing” from her album Hold Space For Me — and Be Your Own Peace is his first solo project in two and a half years. It glistens and glides in a wavy dreamscape of crisp beats and contemplative samples, occasionally employing collaborative features, like keys from Max Hoenig and spoken word by Breanna Gutierrez.

Highnoon’s striking debut album Semi Sweet drew on an eclectic range of influences, from sprightly Stereolab-esque strummers (“Lens”) to the moody Janis Ian-esque jazz-tinged folk (“Not The One”). It was massively well received, and for the follow-up EP, frontperson Kennedy Freeman scales down the scope to moving and meditative acoustic songs reminiscent of Liz Phair and Adrianne Lenker. “This is the first project I’ve recorded on my own,” Freeman wrote on their Instagram. “It’s not much but these songs mean a lot to me. Been taking this time alone to learn and grow as an artist so I can keep putting out music for as long as I’m able. Your support over the year(s) has kept me going and I hope you’ll stick around for what’s next :’)”

The eight-piece neo-soul ensemble Omar’s Hat crushed it in the before times with their regular jazz jams at World Cafe Live, and continued working with the venue during the pandemic on a livestream video series. They’ve been releasing highlights from those streams on Bandcamp, and the most recent collection — which dropped earlier in April — is particularly striking. Comprised of four covers, including Roy Ayers’ “Everybody Loves The Sunshine” and Sam Cooke’s “A Change Is Gonna Come,” the playing is top notch and the content emotional, particularly on a massive, 20-minute jam on Marvin Gaye’s “Inner City Blues” where sax player Yesseh Ali extensively reflects on racism, social justice, equality, and particularly on the epidemic of police murdering Black people across the United States. Powerful.

“Catfish” by Diana Is Calling

Singer-songwriter Mel Juliano gathered together a roster of her peers and friends at University of the Arts to put together Diana Is Calling, and offbeat pop project that’s been releasing monthly singles since February of this year. “Catfish” is the most recent, it dropped on April 30th, and it saunters to a cool, classic R&B backing as Juliano’s honeyed alto shares humorous reflections on honesty in romance.

We talked about this project earlier this month, but it bears repeating, since Kilamanzego is awesome and needs to be heard far and wide. The Philadelphia electronic songwriter and producer makes heady, transportive instrumental music that’s unlike anything you’ve ever experienced, and enlisted a group of friends to reimagine “Anxiety,” a single that was an exclusive bonus track for merch-buyers earlier in the pandemic. The interpretations range from Torr’s vocal version, to RamonPang’s glitchy breakdown, and a supernova of a remix by Cumulus Frisbee. For more recent goodness from Kilamanzego, check out her guest mix and interview on FUXWITHIT.

Not For The Ordinary: In My Fairytale by Micah Graves

Philly composer Micah Graves creates so many moments of emotional crescendo, on both his singles, and now his studio albums. Not For The Ordinary: In My Fairytale is the second LP the pianist and bandleader has released this year, and it’s an immersive set of 14 songs that tap into emotional autobiographical moments as well as hopes and dreams. Listen to him talk about it on the Phound Sounds podcast here.

Led by Philly’s Connor Byrne and featuring members of the Philly indie / punk band Brackish as well as the post rock-y Lancaster outfit Bells, the new trio Mt. Ida releases its self-titled debut today. It’s a toothy, pensive post-hardcore set inspired by Envy and Philly’s dearly departed Hot Cross: the vocals burn, the beats move from a jog to a hustle, and the energy is ideal when you need to rage.

Enjoy the Journey by David Jamison

Bassist and composer David Jamison released his second-ever project today, and it’s a funky set of lively grooves — some vocal, some instrumental — that tap into themes of, according to Jamison’s Bandcamp page, “love, exploration, belonging, and being true to one’s self.” You can hear a love and appreciation of artists from Thundercat all the way back to Herbie Hancock in his work, and the new project serves altruistic ends as well as entertaining ones: a portion of the proceeds from the first week of sales will be donated to The B.L.A.C. Project, a nonprofit that empowers BIPOC youth at the intersection of art, culture, and activism.

Distinguish the Microtones by Ryan Young

Philly indie power trio Dear Forbidden released a new EP last summer but has mostly kept quiet during the COVID months — understandably so, for sure — but this spring, bassist Ryan Young emerged with his first solo EP, distinguish the microtones. (“I know, bassists releasing solo EP’s, what else will this pandemic do?” he joked with me over email.) He cites Grandaddy, Slowdive, and Thurston Moore as influences, and the latter in particular comes through on the driving single “Piece Of Cake,” which mixes groove and squalor in that manner that made the 90s indie undeground equal parts explosive and incredibly fun; see also Girls Against Boys, Jawbox, and maybe a tiny bit of Slint? Good stuff.