Sieve bid a rowdy goodbye with “Prudence” & “Around” - WXPN 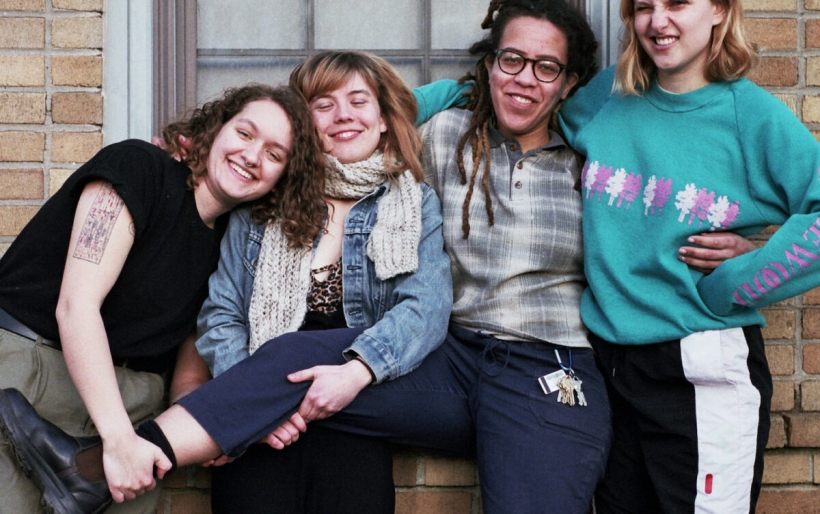 Sieve | photo by Tiny Haddad | courtesy of the artist

Sieve bid a rowdy goodbye with “Prudence” & “Around”

Philadelphia’s Sieve released two final tracks this month before concluding their project, “Prudence” and “Around.” The self-proclaimed “clowncore” quartet built a lovable new language out of misshapen punk and indie noises, habitually bearing hilarity, fun and unadulterated freedom in their live shows and on tape, too – and they deliver just that on these rowdy new singles.

Sieve is a collaboration by four Philadelphians who have all contributed to a bunch of current DIY projects: Em Boltz (Corey Flood, Enchanted Forest) fronts, Emily Lyon (Likes, Wilt) on synth, Rachie Weisberg (Yeah, Baby) on bass and Madeline Rafter (Snake Boy Gang, The Original Crooks and Nannies) drumming. Their debut EP, Three Secrets, came in 2018 on Fire Talk — five gritty and abstract rock compositions clocking under seven minutes. Find their VHS-playground-romp video for “The Beekeeper” below, and enjoy remaining a kid forever.

The new pair of songhs sounds equally punchy, both tracks restless and unnamable like thunderheads. Their paths are unpredictable because every motion ends before it’s barely started; the band rips apart every pattern before it ever gets familiar, and it’s mesmerizing. I love tracing Rafter’s taut drumming on “Prudence,” bouncing around Weisberg’s thick, sculpture-like basslines. Boltz, as often, brings endless fun with words – words like “tough” and “bite” – and makes me want to stop trying to be cool. They ponder the benefits of “drinking more water” and repeatedly promise, “I am turbid like the bay.” For all the joy and ruckus you have brought us, Sieve, you will be missed.

“Prudence b/w Around” is out today on Philadelphia’s Ramp Local. The band also shared feelings about their farewell with Ears to Feed, who premiered “Prudence” on Monday. Previously, “Around” was featured on this wonderful compilation by Slumber Mag – who just shared a new playlist, too, in celebration of Sieve!