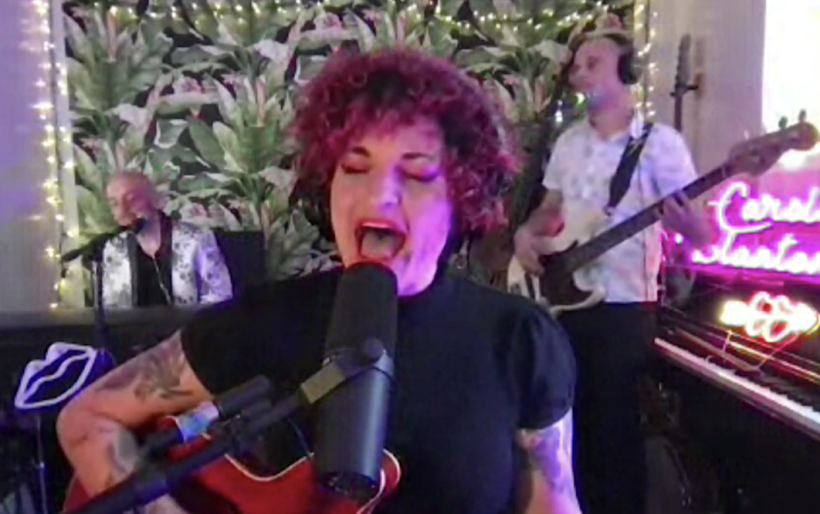 Over the past twelve years, Carsie Blanton‘s music has explored an eclectic array of souns from folk to swing to kitschy jazz-pop. Opening her Free at Noon performance with the soaring melodies of “Party At The End of the World” — which, at moments, felt like a jaunty interpretation of “People Get Ready” — it’s clear that soul music, and its social conscience, is the driving force of her new album Love and Rage.

The new songs are more political and direct than Blanton has been in her past work: “Philly went pretty hard during the protests last summer,” she said. “We were out in the streets, I know some of you were too, and here’s a song I wrote when we got home the night of June 1st, 2020.” The track, “Down In The Streets,” looks at power and corruption, among other things: “the house will keep winning till we burn the house down.”

“A lot of this record is about fighting the statys quo,” Blanton said later, as she led into the closing “Be Good.” “A lot of times that work is hard, it’s thankless, it pisses people off. People will do a lot of things that try to stop you, but it doesn’t mean it’s wrong.” She also shouted out the office of Philly District Attorney Larry Krasner, hoping “next week’s election goes well,” and also cheered on “my comrades in the Philly Liberation Center.”

Blanton’s ties to Philly are strong; she made her name locally in the mid-aughts and was embraced by folks like the late Gene Shay of the XPN Folk Show as well as XPN Local’s Helen Leicht; she relocated to New Orleans in the 20-teens, but made her way back to town (“I couldn’t stay away”) and continues playing with longtime local bassist Joe Plowman. Their drummer is New York’s Patrick Firth (“we just told him about the mummers, so now he knows all about Philadelphia stuff”).

The set also included the songs of love and introspection that Blanton made her name on; she said the jaunty “Can’t Wait to Break Your Heart” was her attempt to write a Nick Lowe song, and it definitely hit the mark. Meanwhile, the slow contemplative ballad “All My Love” was written “for a handsome Irishman.”

But the most impactful stuff came when Blanton looked at the world beyond the lens of the personal, as the lyrics to “Be Good” encapsulated:

“Dr. King was a preacher, he had God on his side.
He said all God’s children are brothers. Don’t cast your brother aside.
Dr. King was a dangerous man, that’s the way he died.
Saying ‘be good to the people you love, and love everybody alive.'”

Watch Carsie Blanton’s full Free at Noon performance below, and see her perform live at World Cafe Live on November 20th with Chris Kasper. Tickets and more information can be found at World Cafe Live’s website.