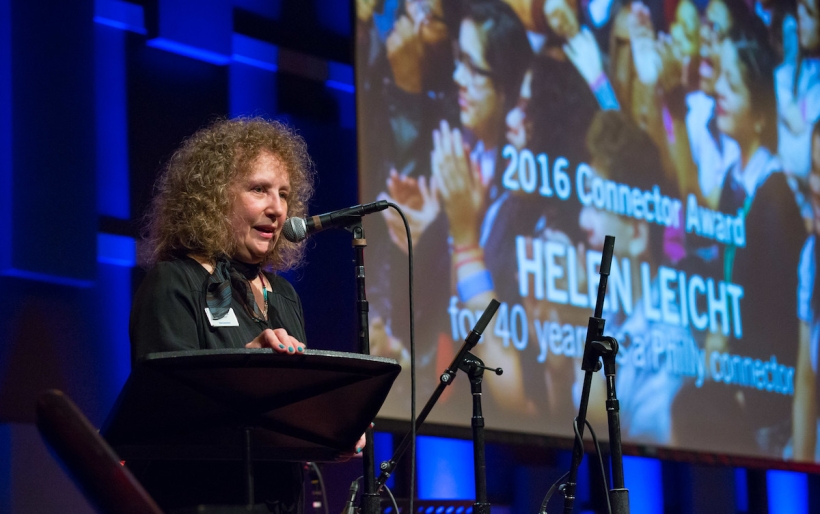 Always Be Passionate: XPN’s Helen Leicht talks about Philly music, her career in radio, and paying it forward on 25 O’Clock’s 200th episode

WXPN Midday Host and local music champion Helen Leicht is the special guest on the 200th episode of 25 O’Clock, the long-running local music podcast hosted by Philadelphia’s Dan Drago. Over the course of an hour-plus conversation, the two talk about Leicht’s life in music: how The Beatles sent her on her path at an early age, how she broke into Philadelphia radio in the mid-1970s, and how she brought her passion for music and from-the-heart programming to WXPN in the 90s.

The conversation begins with memories of Leicht’s childhood: growing up in South Philadelphia, falling asleep listening to WIBG on a blue transistor radio tucked underneath her pillow. “Motown and The Beatles were my guiding light in my childhood years,” she says. “That was the training ground for me. Training your ear to listen for voices, melodies, and the music.”

She talks about knowing from a young age that music had to be her career, since music was such an important part of her life; she talks about being driven to get into broadcasting, hustling her resume from place to place till she got a job at KYW-TV in the early 70s. From working as a secretary to working as a production assistant to sitting in the audience as John Lennon, Yoko Ono, and Chuck Berry jammed on The Mike Douglas Show (look for her in the crowd at the 7-minute mark of this video), her tenure there was eventful and led to her first radio gig at WIOQ in 1976.

She talked about working in the album-oriented commercial radio format, reflected on its parallels to her public radio gig today, and how she made her way to WXPN in 1990, hosting Saturday afternoons and inviting local artists like Huffamoose and Ben Arnold to join her on the air.

“There were all these bands who really did want to have their music out there, so they would come in on Saturday, I would set them up in the studio, we had conversations,” she said. “That was the beginning for me to realize how important it was to have an outlet for these artists.”

She goes on to reflect on the standout moments of her time at WXPN — seeing Amos Lee for the first time at the Northeast Regional Folk Alliance conference, getting a burned CD from Melody Gardot after an open mic at World Cafe Live, and connecting with Mondo Cozmo’s Josh Ostrander after being blown away by the song “Shine” only to find out he was a longtime fan.

She also offers advice to the next generation of local music champions: always be honest, always be passionate. “What you have to do when you’re picking music is you really have to feel like you’re going to stick by it,” she says. “I played Amos Lee because i believed in him and his voice and his songwriting and I decided I was going to stick with him.”

Listen to Helen Leicht’s entire interview on the 25 O’Clock podcast below; while you’re at it, listen to Drago’s recent guest DJ set on What’s The Frequency on WXPN, and his 2020 guest DJ set on XPN Local.