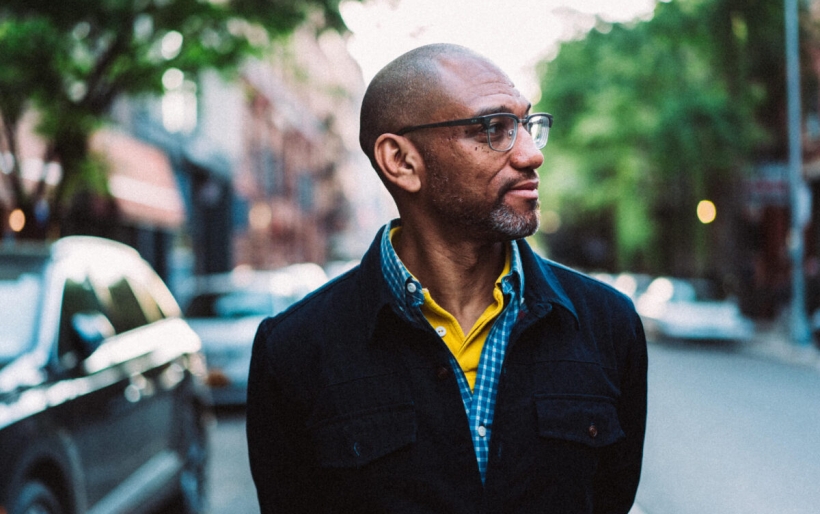 The influence of visual art on King Britt’s music is self-evident, from the prominence of projections in his live sets to a full album paying homage to artist-evangelist Sister Gertrude Morgan. He’s curated events at museums like MoMA PS1, and spearheaded a musician-in-residence program at the Philadelphia Museum of Art. Britt is a paragon of Afrofuturist imagination, and the movement’s iconography appears in much of his work.

It finds fullness of expression in his 2018 collaboration with muralist Joshua Mays. Dreams, Diaspora, and Destiny is the first Philly mural to be enhanced by augmented reality, which helps viewers to imagine worlds beyond the one they can perceive with their eyes. In this Q&A, we talk about AR’s unique ability to express Afrofuturist vision, and the way his work with Mays influences Britt’s course “Blacktronica: Afrofuturism and Electronic Music,” now offered at UC San Diego and virtually at every UC campus.

The Key: How is your work as a musician shaped by visual art in Philly?

King Britt: I’m a huge soundtrack nerd. I’ve always loved the combination of sound design with visuals in film. The art of comic books was also a major influence for me. But what penetrated my heart and influenced everything was graffiti. Cosmo Baker and Zoe Strauss’s mom owned Spike’s Skates on South Street, and everyone used to go there to hear music and skate. That’s where I met ESPO [Steve Powers] and Ari [Saal Forman]. They were the graffiti artists behind On The Go, a magazine about music and graffiti. Man, graffiti in Philly: Razz, ESPO, Pizazz. It was insane.

The best art gallery in Philly in the 80s was the subway. I’d take the trolley in for school at Greenfield, and every stop had a beautiful piece. When you think about ESPO’s mural project A Love Letter to the City, that’s where he got it. You’d be on the subway, and at every stop you’d see a letter to the city from a graffiti artist. The funny thing is that the head of Mural Arts, Jane Golden, used to work for the anti-graffiti network. Then she was like, “This is beautiful; what are we doing?” She was integral in starting Mural Arts to make street art legitimate.

TK: What is your favorite artwork in Philadelphia?

KB:Dreams, Diaspora, and Destinyis a block-long mural at 53rd & Lancaster that Mural Arts commissioned me and Joshua Mays to create. Joshua was born in Denver but was based in Philly. He’s one of the greatest artists I know. I’m constantly blown away by his detail, his colors, and his vision of Black people in the future. One day I tweeted that Joshua Mays really needs to have a mural in Philly. Mural Arts saw it, and that started a conversation.What makes this project so special is that it’s the first augmented reality mural in Philly. That’s my contribution. We built an app that opens up another world, bringing you into the community as well as into the future.

It was a multi-layered community outreach collaboration. Students from Mastery Shoemaker High School and The Haverford School created sounds for the app and assisted Joshua with the painting. Black Panther had come out a few weeks before, so the students were already thinking about Black people in the future. A lot of Afrofuturist purists critique that movie, but it was such an accessible way into Afrofuturist ideas for these young people. I showed them early sketches of the mural and asked, “What sounds would go with these visuals? Think about Black Panther. You guys like the soundtrack, but there’s also a score: the sound design, the music behind the scenes.” We listened to the score, and then we went around the high school and into the neighborhood to collect sounds. We interviewed elders about how the neighborhood had changed. Then we asked, “What would these things sound like in the future?” and we created a palette of sounds associated with Joshua’s colors and pulling from hip hop, trap, jazz, techno, and house.

This project is about the seed of the future. In the center of the mural, a girl is holding a seed, and light comes out of the seed. Hopefully the students look at the mural and think, “This is where it’s at. The future is here in my hands.”

TK: How is AR uniquely suited to represent Afrofuturist ideas?

KB: Afrofuturism is the intersection of science fiction, technology, music, visual art, and literature, used to envision and empower the future of the Black community. What better way to educate people about this than through the medium of the iPhone? On top of the physical painting, there’s a whole other layer of information, a whole other world that you can access.

TK: How does Dreams, Diaspora, and Destiny influence projects you’re working on today?

KB: Oh my god. So I teach a class called “Blacktronica: Afrofuturism and Electronic Music.” We pay homage to all the heroes and pioneers of color that have added to the advancement of electronic music. We cover the Dogon tribe in Mali, Sun Ra, Herbie Hancock, of course George Clinton’s Parliament Funkadelic. When you hear these names, the first thing you think of might not be the music. You think iconography, costumes. You think of, say, Parliament Funkadelic’s album covers. Within the artwork are these messages, this new vernacular that comes out of the African American experience. The artwork was always an extension of the music, and vice versa, so I have tons of visual art students in my class.

We just did a festival called “Blacktronica: Sound for Humanity,” and when I chose a collaborator, the first person I thought of was not a musician but a visual arts student. So how does the project with Joshua Mays inform what I do now? My instinct is to collaborate with a visual artist before a musician.

Visit Dreams, Diaspora, and Destiny at 53rd and Media Streets in West Philadelphia, a download the app to accompany the mural.

Catherine Ricketts writes about the arts, grief, and spirituality. Find her on Instagram at @bycatherinericketts and visit her website at catherinedanaricketts.com.