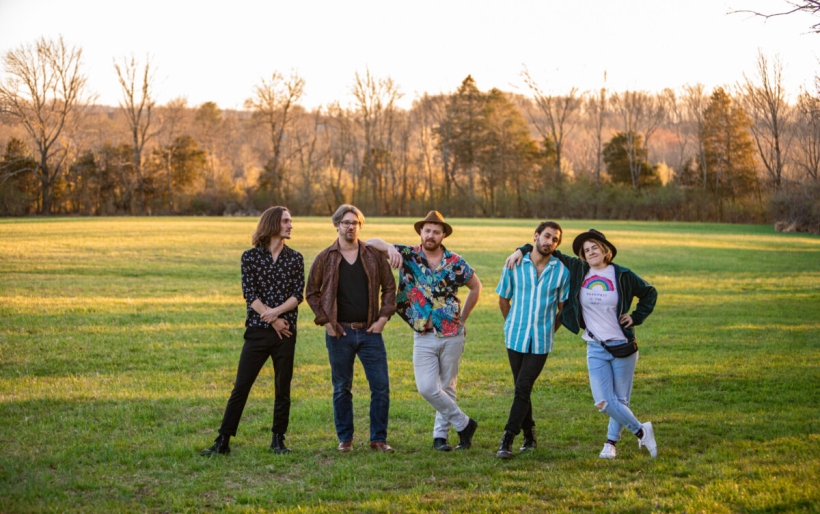 In their decade as a band, Chestnut Grove haven’t done it all, but they sure have done a lot. They Philly-based rockers have played mid-size to major venues, shared stages with plenty of great artists, and made a whole lot of music along the way. Shockingly, one of the things they hadn’t done was record a full-length studio album, but that changes now.

The Album will mark Chestnut Grove’s first studio-recorded LP. It’s an exploration of aging and changing, and all of the struggles that come along with those things. While the album itself will drop this Friday, May 21st, Chestnut Grove are set for a celebratory performance the following week: a limited capacity indoor gig at the Ardmore Music Hall on May 27th.

The band have already released the first single from The Album, entitled “Golden Age.” It channels what it feels like to think that the best is behind you. As the opening track of the album, it channels all of the nostalgic rock that the band is so known for, while pulling out the more Americana side of their sound as well.

I recently had a chance to chat with two of the members of Chestnut Grove over email to hear a bit more about they’re up to. Dee Gerhart, guitarist and co-lead vocalist, and James Daniels, the drummer and second lead vocalist of the band, talked about the band’s growth, getting back to live music, and, of course, their upcoming album.

The Key: You guys have been making music for quite a few years now, and there’s definitely been some shifts in your music over that. How has Chestnut Grove changed from your perspective?

JamesDaniels: honestly I don’t even know where to begin. We started making music together in 2011 when we were 17 and 18 years old. Now we are all 27 and 28 years old. Our music has matured over the years just as we much as we have I think. We started as a typical classic rock garage band and now I think we are establishing ourselves as legitimate recording artists with the help from our producer Derek Chafin.

Dee Gerhart: Chestnut Grove started out when we were just teenagers and now we’re all almost 30 years old. I’d say that’s quite a bit of time to grow as a person and also as a musician. We’re family so we go through the ups and downs together.

TK: Speaking of change, it looks like The Album focuses a lot on growth and passing time. Can you talk a bit about the inspiration behind it?

JD: A lot of the songs were written over the past five years. It’s hard to pin point one specific source of inspiration. I love a lot of different music. Rock n roll, folk and R&B are probably my favorites. I think during the making of this record we were very into Motown and New Orleans / Philly soul style music. We were trying to break out of our Janis / Zeppelin style of music making and focus more on our songwriting. Overall trying to define our sound is very difficult for me personally.

DG:  A majority of life is growing, passing time, and sleeping. So hopefully we are speaking about things many can relate to. Songwriting for me helps sort out problems, and is a great way to capture an emotion that maybe is hard to plainly express. It’s usually quite raw and honest.

TK: The Album was meant to be released back in 2020. Do you feel like the songs still resonate with you in the same way they did back then?

JD: The pandemic really set us back, I know we are not alone in this at all. We do have an entire record of new songs written that we will hopefully come out with in 2022. That said we have been a band for 10 years. We have almost 50 unreleased old songs and hundreds of sketches. We have always had a lot of material to work with. Old or new most of the material feels fresh since we are always working on getting better as a band.

DG: Even though the inspiration to some songs may have been personal, I think there are points that comes across where everyone can relate to or even just enjoy for being new and fresh. Since the pandemic gave us time to take a step back, those songs are fresh to me now as well. We got to really hone in on our musical abilities.

TK: You’ve got a few live performances coming up. How does it feel to be back to performing live? And what should we expect from these shows?

JD: I am pumped to play again. I was very depressed and constantly anxious about our music career during the pandemic. I thought we were going to lose all the momentum we gained after growing up in a band together for eight years. Apparently people are more excited than ever before about our music, and that has me feeling hopeful.

The Ardmore show on May 27th is going to be the best performance we have ever put on. I don’t mean to come off arrogant or full of it but we are ready for this and we cannot wait to do more. We were used to playing about 100+ shows a year since 2015 so this entire year off was really good for us overall but we are ready to get back to doing what we do best.

DG: It feels amazing. I’m also nervous. It’s been a while since I’ve jumped around on stage so I’m hoping my lungs and legs are ready. But overall I can’t wait to play to live audiences again. The feeling of connecting with them is irreplaceable.

TK: I know that you guys have plans to get back to touring when that’s possible, but is there anything else you guys are looking forward to when things start opening up again? What does the future look like for Chestnut Grove?

JD: We plan to record a split EP with our friends in Wild Adriatic this summer at their studio. We are also going to start recording the follow up to The Album this summer and fall with Derek Chafin. We hope to have two new releases for our fans in 2022.

We look forward to seeing how much momentum we can get from this release and we are excited to hit some festival stages in 2021 and 2022 (Shoutout to our Mile of Music fans from Wisconsin). I just want to get back to doing what we do best. We understand why the world shut down and we are still being patient but to say we are ready is an understatement.

DG: The future looks bright. As soon as we can start touring full-time, I know we are ready. There is nothing more that we are looking forward to more than getting back out there. We also have more recording planned for this year so that means MORE new music next year. Get ready world. Here we come!

JD: Thank you so much for believing in us and giving us your time. Being on XPN has been a huge goal for us and we are very happy to be getting our music in front of new listeners. We hope people enjoy The Album. Follow us on Spotify,Instagram, Facebook, and Patreon to keep up to date with all things Chestnut Grove.

DG: Thanks for checking us out and taking the time! It’s personally very cool to have the interest of WXPN. We have all grown up listening so the support means a lot.

For tickets and more information on Chestnut Grove’s May 27th release party for The Album, visit Ardmore Music Hall’s ticketing website and be sure to check out the venue’s COVID-19 health and safety policies.