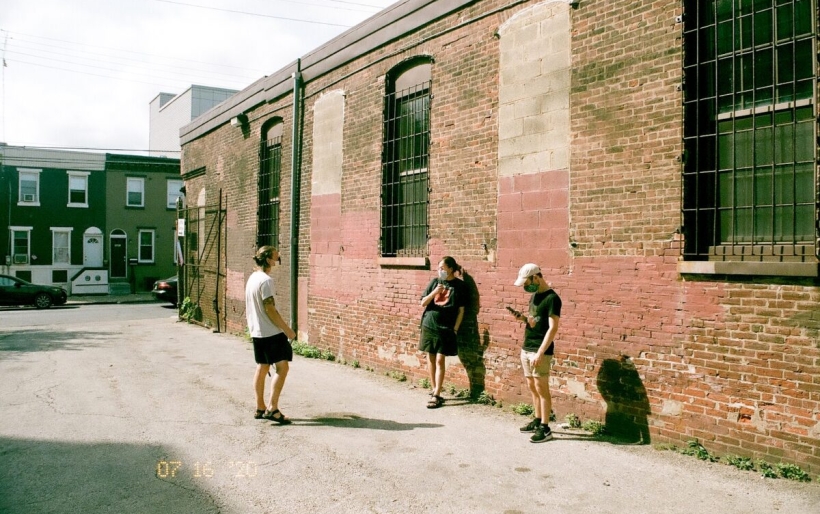 Downhaul | photo courtesy of the artist

Roughly four hours and a large stretch of Interstate 95 are all that stands between Richmond, Va. and Philadelphia.

Even though Phillips and his crew have not made that move outright, they spent a lot of time at Headroom Studios in the Fishtown section of Philly, working on their second LP, PROOF, with a team of friends from various cities in the Northeast.

“Everything’s connected. On the East Coast especially,” Phillips said, when talking about the connection between the two cities.

On a gorgeous spring evening, I sat on Phillips’ deck in Richmond with him and his Downhaul bandmate Robbie Ludvigsen. We were joined by Philly guitarist Max Stern, who on a stroke of luck, was in town visiting family. Everyone came together to discuss the making of PROOF, while Stern provided a gentle ambiance with the lap steel he played on four of the album’s ten tracks.

The album, initially demoed twice, might’ve been born out of convenience and logistics, but found an accidental home in Philadelphia. Produced and engineered by Chris Teti (of The World is a Beautiful Place & I am No Longer Afraid to Die) at Headroom, PROOF features a myriad of support from some familiar people who, in a sense, have taken the Downhaul crew under their wings in the city of brotherly love.

“Our friends really held us up and supported us,” said Phillips, noting that members of Nonfiction helped out where they could. “They let us crash, they brought us food.”

Jokingly, Phillips quipped that Stern is in about half the bands in Philadelphia. Stern laughed, and responded “I am at every show right now because there are no shows.”

Nonfiction’s Evan King helped write harmonies and provided vocals on “The Ladder.” Connor Rothstein, Nonfiction’s bassist, filmed the crew as they got to work. Rothstein’s videos have been featured on Downhaul’s social feeds as “behind the scenes” looks at what went into the making of PROOF.

“James is someone who I can trust to shoot me so straight,” Phillips said. When Cassar received the album, they said “This is good. You’ve done something interesting and it doesn’t sound like you’re aping something else or overly looking at something else,” which Phillips thought was really nice to hear “from somebody so seasoned.”

While Cassar is a more recent acquaintance, Stern and the Downhaul crew go way back to the days of the unofficial Streetlight Manifesto message boards.

“Max was something of a hero on the unofficial Streetlight Manifesto forums,” said Phillips. Around 2007-08, Stern was in a band called The Skatastrophes, which led the two to strike up a friendship. That led to Phillips to reach out via email when Downhaul first recorded, about potentially booking a show.

Stern began playing solo gigs in Richmond alongside Downhaul, with fellow Richmonder Jake Guralnik’s band Bashful. Since then, Stern has kept in touch with Phillips and it was only natural that he played a role in the making of PROOF, especially once the band started recording at Headroom.

“It was really cool being in the studio with you guys because I had the lap steel setup and Robbie had his acoustic [setup],” said Stern, who walked to sessions from his house a block-and-a-half from the studio. “You guys were sort of directing it and showing me the parts that you had mapped out already. I didn’t feel like [the lap steel] was an afterthought. I felt like there was an actual purpose.”

The band had previously worked with Teti, who mixed their 2019 EP Tornado Season, as well as their first album, Before You Fall Asleep.

“We knew that we wanted to have him actually record us instead of just mix and help produce; just be in the studio with us,” Ludvigsen said, calling it a level of involvement they didn’t have before with him that they were looking forward to. “But, he lives in Connecticut and his studio is in Connecticut. We’re not the type of band that can take a month off and go to Connecticut. We knew we didn’t have a lot of time and we couldn’t make it too far away, and Philly seemed like a really logical halfway point for us. Chris has people in Philly, we have people in Philly, and Headroom! It just seemed like a no-brainer.” They worked it out to be there over the summer of 2020.

Sonically, PROOF starts out with strong Balance and Composure vibes – think heavy, distorted sounds and atmospheric production – and ends on a country note, a surprising, but not quite unheard-of sound punctuated by Stern’s shining lap steel adding to the “Dirt Emo” effect made famous by Ruston Kelly.

“Truthfully, there was some trepidation along the way that it wasn’t going to sound cohesive. Or that there would be too many songs that didn’t sound like the next one,” Ludvigsen said, adding that the band tried to add touchpoints along the way to connect everything.

“I think the trajectory and the sequencing of the album is something very deliberate,” Phillips said, “If you listen to the opener and the closer side by side, they’re pretty different. And sonically, they couldn’t be more different. But they’re supposed to be written into the album like a release-rich trajectory or like an inertia almost.”

Gordon’s voice is interesting for someone in a band like his. He’s gotten country comparisons before, because he has more of that signature nasally twang to his voice. “We’ve gotten it from the beginning, and I think that’s just because of the way that I sound. And that’s just something I’m kinda stuck with. If there’s a way to sing differently, I haven’t found it.”

“I also think that every single song before this album was major key. Not that there’s never been a country song in a minor key…but when it’s not minor and there’s a southern accent, you might hear some country in it. I think it’s primarily the voice they’ve gotten it from,” said Ludvigsen.

Phillips noted, “It’s been laid at our feet before. I’m stepping back and looking at the album and there are four songs with lap steel. There’s a finger-picked song. The closer is pretty unabashedly a country song.”

On the first day of tracking, Phillips was freaking out, so Stern suggested that they meet up for breakfast as a way to help quell Phillips’ nerves. At 7:30 a.m., the two ended up at the Coral Street Mini-Mart a block away from Headroom.

One thing that kept the entire Downhaul crew fueled in the making of the record were “sensational” hoagies from the Coral Street, namely the breakfast hoagies made by Guillermo, the cook.

For the uninitiated, their breakfast hoagie differs from your typical breakfast sandwich in sheer volume. Picture a full-size hoagie with hash browns, eggs, cheese, hot sauce, etc. If you can eat it for breakfast, it can probably be added to the hoagie.

Phillips recalled: “We were sitting on the dock at Headroom swinging our feet eating hoagies. I was like ‘This is gonna be okay.’”

Before the pandemic hit, the Downhaul crew used to road test new songs, performing them live. The pandemic dramatically changed that process.

“This was our first time having never played any of the new songs live, whereas with our previous five releases, we got to play those songs in houses, at a pizza place, we got to play those songs up and down the East Coast and gauge reactions to them; refine them that way,” said Phillips, “We didn’t play a single one of these songs live. And COVID definitely played a role in that and also impacted the way we recorded. Everybody was wearing masks the whole time, everyone was wiping things down the whole time.

However, don’t call PROOF a quarantine album or a COVID record.

“I think looking back on this time, we’re gonna see a bunch of albums [like that],” Phillips said. “We’re gonna be like ‘Oh that was one of the best quarantine records; that was one of the best COVID records.’ I don’t think [ours] fits that mold because we still got to practice heavily as a band, we rehearsed a ton and demoed it twice. We got to still do that, whereas some people who are making albums didn’t get to.”

COVID also impacted one of Phillips’ favorite Downhaul traditions: The album release show. If shows were fulluy back today, the band would play a few record release shows: The Camel, in Richmond; The Milestone in Charlotte, N.C.; and of course, Philadelphia.

“We sneak a Philadelphia release show in there and nobody comes,” said Phillips.”It’s a classic Downhaul Philadelphia experience.”

“Dude, that’s a classic Philadelphia everybody experience,” Max retorted. “I’ve played to no one in Philadelphia plenty of times.”

Downhaul’s PROOF is out today via Refresh Records, and can be ordered here. Keep tabs on the band’s activity on Twitter at @DownhaulBand.