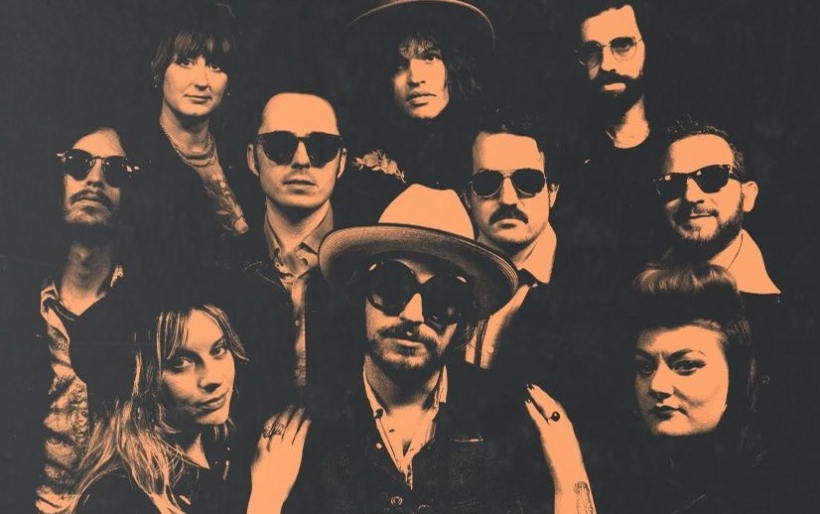 Cosmic Guilt | photo by Jeremy Pero | courtesy of the artist

Spearheaded by Scantron’s James Everhart, the expansive country / rock supergroup Cosmic Guilt arrives this summer with a melancholic heartbreak tune in the form of “Cautious Lovers” and a search for new meaning on “Sun In Your Eyes.” The band is a ten-piece expanse featuring members of Ruby The Hatchet, Levee Drivers, Dull Blue Lights and more, and fans of Arcade Fire, Yusuf / Cat Stevens, Neil Young, and of course Scantron and Low Cut Connie will get into their music.

“Cautious Lovers” illustrates a feeling of wanting to dive in headfirst with a person, but intentionally sabotaging yourself because you know deep down that something’s not right. Whether you’re at fault or they are, the destined failure is perfectly set up so you can’t be surprised when things fall apart. “You know I trust you, but I don’t trust myself,” the song says. Putting the blame on yourself right from the jump and being so careful with your feelings that no one can call you out for your faults later on is a textbook “It’s not you it’s me” excuse, packaged perfectly in this box of country Western-mystique and sharp vocal tones. The artfully apologetic safeguarding of emotions is what makes this song so universally sad. We’ve all been in the position where we had to determine whether or not being a “cautious lover” was a bad thing or not, because someone’s always bound to get hurt. But if you’re lucky, it won’t be you.

Listening to their other single, “Sun In Your Eyes” feels like a travel hymn, with a complex, shimmering soundscape interpolated with rhythmic slides and languid guitar riffs. It feels like a natural progression in the storyline from “Cautious Lovers.” We’re taken from longing for loneliness to finding yourself alone and looking for a new place to belong. The literal or metaphorical “sun in your eyes” is representative of starting over and finding the next person or place to make yourself at home in. The intentional monotony in the musicality of this track aids to that tireless driving imagery. Knowing that something better is out there for you doesn’t come without some compromise.

Both of these songs boast vibrant, confident soundscapes. They’re undeniably folk rock with an emphasis on the communal effort behind the scenes. Gang vocals are woven throughout the choruses, and the production rests on the hands of a number of different players. Everhart tells us over email that their first track has been kicking around for a while: “I actually wrote ‘Cautious Lovers’ in college about 11 years ago — though I was never able to understand how to write more music that would accompany the song until recently. Getting into the folk spectrum has been the most natural thing for me to assimilate into as my songwriting evolves. I am profoundly grateful and proud to be surrounded by some of Philadelphia’s finest session musicians and am excited for the rest of the album to be unveiled.”

Though both songs preach loneliness and wanting to belong, Cosmic Guilt is the result of a collective effort: those ten musicians we told you about earlier. Backed by Josh Aaron, Jared Loss, Kyle Perella, Jillian Taylor, George Murphy, Tyler Yoder, Jillian Willis, Hannah Taylor, Todd Fausnacht, the band is an undeniable supergroup of some of Philly’s most treasured alt / roots rock players.

“Cautious Lovers” and “Sun In Your Eyes” precedes a full album drop projected for later this summer, and we’ll have more on that for you closer to the release. The band makes its live debut on Friday, June 18th with an outdoor show at Sunflower Philly, opening for Ali Awan’s EP release party. Advance tickets have sold out, but a limited number of walk-up tickets may be available the day of the show, and we encourage you to check back on Sunflower’s website for more.