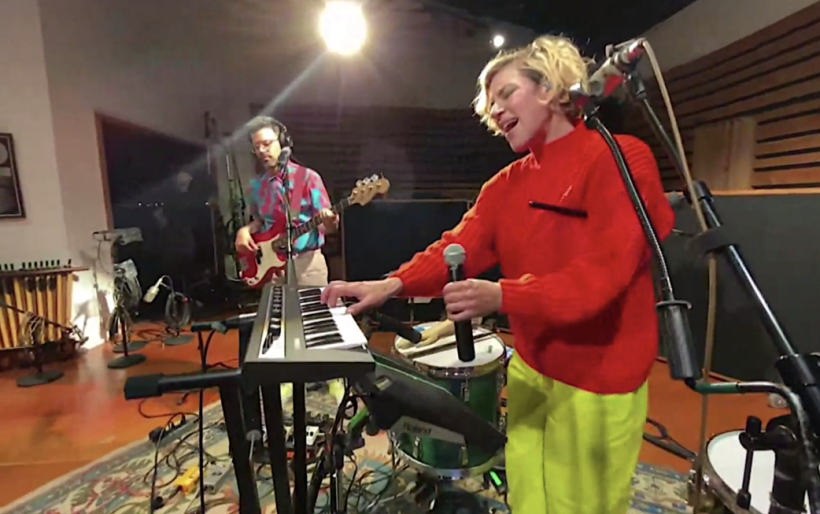 While the palpable energy of in-person concerts has certainly been sorely missed in the livestream era, it has opened up space for more imaginative elements — if the artist is willing and able to take advantage.

Performing live from 25th Street Recording in Oakland, Tune-Yards played with trippy visuals and broke down the third wall, as much as one can do on a webcast concert. One camera shot swung around to capture frontperson Merril Garbus’ reflection, her screaming face lit by haunted house strobe lights, in a mirror getting slowly coated by slimy ooze. Her banter was beamed telepathically to the audience, fingers placed firmly at her temples. Later, she played the sampler with prosthetic prop limbs, while the camera person inserted their hand in the shot, attempting to play the keyboard, before Garbus swatted their arm away.

Visual playfulness like this would not have been successful were this a non-virtual edition of NON-COMM — though I imagine Garbus would find some way to make the set a spectacle all the same — but with this year’s convention being beamed into our homes, it mixed things up and commanded viewers’ attention, augmenting the grooves with the appropriate amount of weird.

But let’s not forget the groove, though. Showing off Tune-Yards new album Sketchy was the mission of this 25-minute set, and it displayed a heady range of engaging electronic production, paired with contemplative lyricism. The trip-hop underbelly of opener “My Neighbor” scored a life lesson on isolation and empathy, with Garbus singing “My neighbor held the key to my survival / I made sure to lock the door.” On the other end of the set, the soulful gospel groove of “Hold Yourself” ended in an empowering mantra: “we all have doubt, we all have rage / we all have trouble being brave enough to turn the page / but we will.”

In between we saw solid contributions from Garbus’ longtime collaborator Nate Brenner — his deep bass groove on “Hypnotize” was particularly potent — as well as handy rhythmic layers of percussion from Garbus — the standing drum rhythm of the whokill throwback “Gangsta” — and a bit of lively choppy sound collage — the selling point of “Look At Your Hands,” a disco/house groove from 2018’s I Can Feel You Creep Into My Private Life, and the place where most of that limb imagery played into the performance.

Sketchy is out now on 4AD records, and can be purchased here; below, watch Tune-Yards’ set for #NONCOMM 2021, and check out performances from the entire festival here.

Setlist
My Neighbor
Hypnotized
Look At Your Hands
Gangsta
Hold Yourself