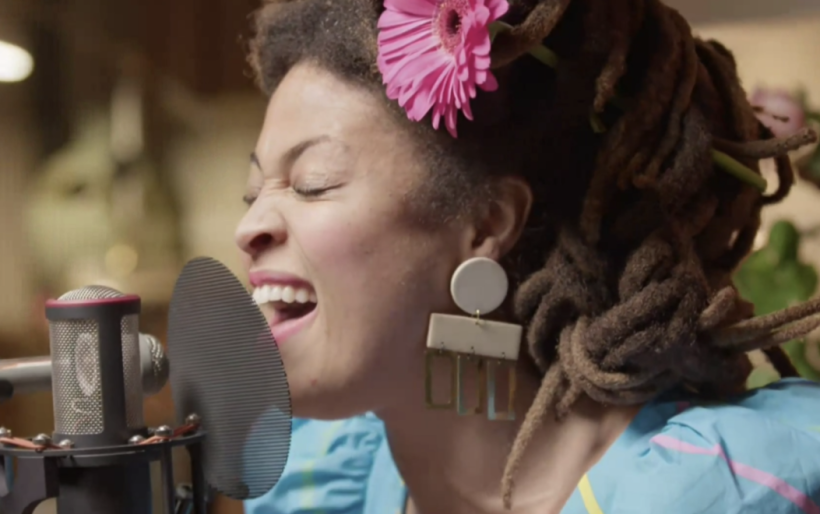 Flowers in her hair and surrounding her on stage, Valerie June gave a mystical performance live from Mason Jar Music in Brooklyn for night one of NON-COMM.

Appearing like a ray of sunshine, June played some songs from her latest album, The Moon and Stars: Perscriptions For Dreamers. An eclectic mix of African rhythms, electric blues, and silky soul, the album topped the folk charts when it came out in March.

True to its title, each song is supposed to serve as a source of healing. Before playing each track, June would read from the liner notes and sprinkle flower petals to set her intentions. Her own power was automatically evident on “Smile,” which was written to inspire hope, possibilities, and growth.

Pure joy radiated from June as she wished for courage, strength, and serendipity on “Why The Bright Stars Glow.” A song about resilience, her buttery vocals melted over her blindingly optimistic lyrics. She shines over the smokey and soulful “Call Me A Fool,” featuring Carla Thomas. Taking a leap of faith seems effortless as her voice soars up from rugged low notes into a velvety vibrato.

Illuminating and incandescent, June appeared to shine on “Colors.” Finishing with “Two Roads” she manifested truth and wisdom. With slow percussion and a thick twang, the track urges you to keep pushing forward.

One of the last true dreamers, June makes you believe anything is possible. Check out her setlist below and explore the rest of NON-COMM here.