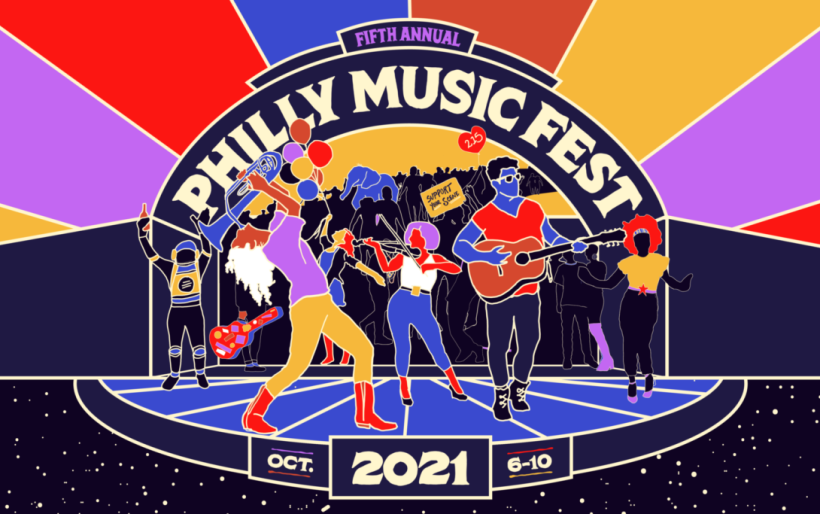 While the whole world was on lockdown in 2020, Philly Music Fest managed to be a beacon of hope.

At the beginning of the COVID-19 pandemic, founder Greg Seltzer launched a microgrant program to get money in the hands of over 300 artists impacted by the pandemic. The festival also pivoted to a virtual edition that September, beaming stellar performances by Japanese Breakfast, The Districts, Langhorne Slim, Clap Your Hands Say Yeah, and more all over the world from the Ardmore Music Hall stage.

“It was a great production,” Seltzer said on the XPN Local Show. “We’re psyched to have done it, but we are super super excited to get back to in-person.”

And they’re doing just that this year, with a heavy-hitting lineup of marquee names in smaller rooms than they’d normally play; Hop Along at Johnny Brenda’s, Son Little at MilkBoy, The Menzingers at Ardmore. Several of the nights of Philly Music Fest 2021 have already sold out, despite the fest being five months away; tickets for the remaining nights can be picked up at the festival website.

Seltzer talked about the excitement around Philly Music Fest 2021, as well as the festival’s growth, and its community-oriented goals, on the XPN Local show while guest DJing a set featuring nearly every band on this year’s lineup. Listen and read highlights from our conversation below.

…on programming with a focus on bigger bands in intimate spaces.

I’ve always loves the notion of seeing a bigger band that I’d see at larger venues play a smaller, not more intimate — maybe that sounds like you’re sitting down or something — but just seeing a bigger band in a smaller room, there’s something about that. It’s really going to be special to have these artists, and I honestly think that it wasn’t just Philly Music Fest and me programing, it was that these artists were more up for playing smaller venues and getting back and giving a treat to their fans. It has to be a two-way street, they have to want to play Ardmore Music Hall or World Cafe Live instead of The Fillmore or Union Transfer. And this year, they were like “you know what? It’s been tough. Let’s have a really special night with our fans.”

I don’t want it to seem like we’re forcing genre, but I really believe with Philly Music Fest, one of the advantages we have is our genre for the festival is what’s being made in Philly. You look around, there’s jam band festivals, there’s Americana festivals. We have a really unique opportunity to not be genre-specific with our curation, and I’m trying to make each show a microcosm of that genre-diversity. Kelsey Cork would have been a home run opener for Hop Along at Johnny Brenda’s. But I want, frankly, people to realize how amazing they are and how fun they are. They’re going to open up that show and it’s going to be super fun, and it’ll roll right into an Americana set with Stella Ruze, and then just be blown away with Son Little. I feel really strongly about celebrating Philly as opposed to any one artist.

…on expanding the scope of Philly Music Fest to five nights at five venues.

Part of our mission is getting musicians on stage, getting them attention, getting independent venues involved. To be honest, the more shows, the more independent rooms we have — there’s a couple others, The Fire is kind of being rennovated — there’s other venues we can populate, and if our community is going to support the local musicians and the independent venues, we’re going to keep growing this and keep doing the best we can. I don’t know that there’s a tolerance for much more than five days of shows, but we can do multiple shows at small venues on the same night, and we’re trying that precisely this year.

…on The Menzingers’ closing two-night stand at Ardmore Music Hall.

They’re a band that plays much bigger rooms. The Fillmore, Union Transfer, they can fill those places up. We pitched this to them, and to their credit, they do a lot of music education work in Scranton and in Philly, and the message of what we do really resonated with them. We were able to get them for two days, a bunch of them live here locally, and we put together opening slots and direct support that mixed it up both nights. Genre-diverse, and a cool experience for the two days with the fans.

…on the support Philly Music Fest provides to various nonprofits in the region.

That’s the core of the mission. We’re here talking about music, and people coming out to shows and having fun. And that’s what I want people to do. But the model of Philly Music Fest and what I really believe in is we’re making proceeds and money from these shows but then we’re reinvesting the proceeds that would normally go to a LiveNation or an AEG or Bowery, we’re taking that money, and we’re reinventing it in music education programs. So in our city, we don’t have a lot of music education in our public schools. It’s been cut. So therefore we have these amazing music education programs: Rock To The Future, Settlement Music School, Musicopia, Girls Rock Philly. And they’ve sprung up, but they need funding, they’re not publicly funded. So what we do is we raise money from these shows and then we deploy those funds to music education. We’re taking this money, we’re giving it to children and kids, and we’re hoping that in five or ten years, they are on the Philly Music Fest stage. We need more local bands, we need that pipeline enhanced.