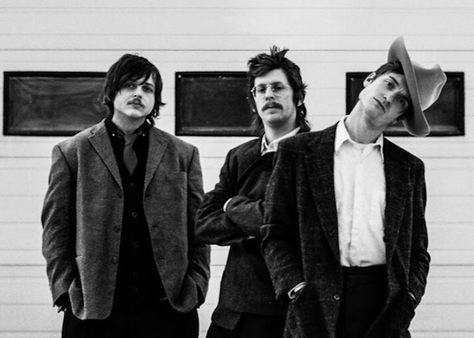 Vundabar | photo by C.J. Harvey | Courtesy of the artist

With freshly brushed fangs, Vundabar are ready to sink their teeth into some fall tour dates. The band will play two shows back-to-back at PhilaMOCA on October 21 and 22. The initial announcement was accompanied by the release of their single “Aphasia,” and its B-Side “Ringing Bell.”

Starring death straight in the face, the songs were written after frontman Brandon Hagen’s father had a stroke that resulted in global aphasia. “The song originated as being about having difficulty describing the world and yourself, and then my pops’ stroke happened and it felt uncanny and fated,” Hagen said in a statement.

Overcast riffs and shadowy percussion give “Aphasia” an unnerving tension. A disconcerting feeling of deja vu creeps in as he struggles to place his feelings despite the strange sense of familiarity. Building up just to break back down the song mimics the what if’s you convince yourself are somehow inevitable. The track also features backing vocals from Indigo de Souza who’s 2018 debut album I Love My Mom is being reissued via Saddle Creek next month.

“Ringing Bell” is closer to the stop and start of older albums like 2015’s Gawk. Channeling nervous energy and uncertainty the band seems ready to snap at any second. A strange tension lurks below the surface as Hagen sings about hurricanes of blood and his inability to catch up with the ticking of time.

Tickets are on sale now and can be purchased here. Due to the uncertainty of the ongoing Coronavirus pandemic, we recommend fans checking the venue website for the latest on health and safety protocols for the show. You can also watch the video for “Aphasia” below and get the latest in Philly-area live music news at the XPN Concert Calendar.