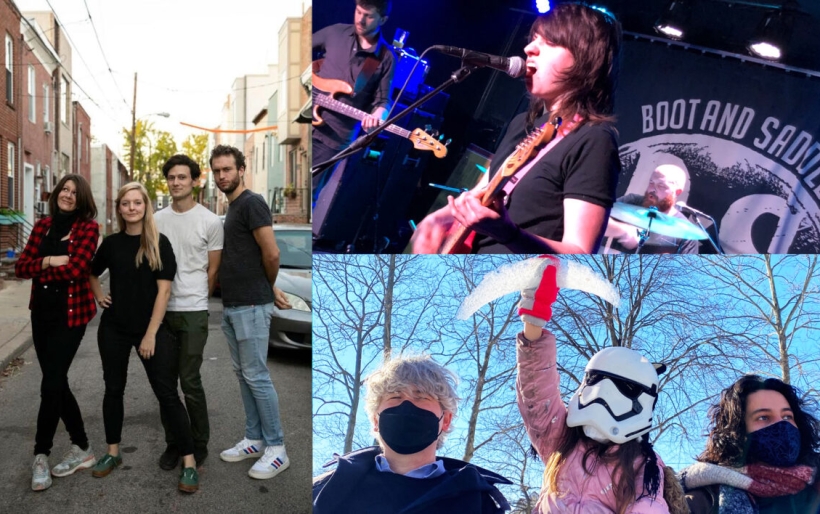 A sick triple bill of Grocer, Grace Vonderkuhn, and Flanafi + Ape School is coming to PhilaMOCA

Late summer and early fall tour announcements are back in a big way these past few weeks, but here’s something we miss tremendously: a completely stacked, all-local triple bill at one of our favorite all-ages venues.

The newly-resurrected PhilaMOCA hosts a night spanning gritty indie and shimmering psychedelia when Grocer, Grace Vonderkuhn, and Flanafi + Ape School play on Saturday, September 4th. It’s one of those gigs where I might not have ever imagined all three of these artists one single bill, but it somehow works perfectly.

Let’s start, as the show will, with Flanafi + Ape School: the former is the solo pursuit of Simon Martinez, a Philly guitarist who plays with Jazmine Sullivan, Killiam Shakespeare, and more, while the latter is the long-running heady rock project of Philly’s Michael Johnson. Together, the music they make — a new EP called The Knees Start To Go — is a gorgeous tapestry of bustling beats, radiant ambient atmospheres, and wistful vocals in the vein of The Notwist and The Books.

It’s more low-key and heady, but in a way will perfectly compliment Wilmington badass Grace Vonderkuhn. Though she’s primarily known as a shredder and a rocker, the psychedelic side of the sonic spectrum is a big love of her’s as well, and her placement on the bill is almost like a bridge taking the dreamy starting point and amplifying it. Vonderkuhn’s record Reveries was released in 2018 on Egghunt Records, and based on the stuff she’s been playing on livestreams and pre-pandemic gigs, she and her band are due for new material.

Capping the show is the pure rock energy of Grocer. The new-ish to Philly bandmates moved to town to get their start in 2019, and their Pixies-esque Little Splash LP was a highlight of early-pandemic local albums. The band joined us this winter for an awesome Unprecedented Session shot in a lot in South Philadelphia, and just released a terrific EP called Delete If Not Allowed which encompasses themes of artistic ambition, pandemic anxiety, and post-trauma catharsis. It’s heavy and awesome.

Can you tell I’m excited for this show? Tickets are on sale now, more information can be found here. Listen to music from each of the artists below, and get the most up-to-date information on local concerts at the XPN Concert Calendar.