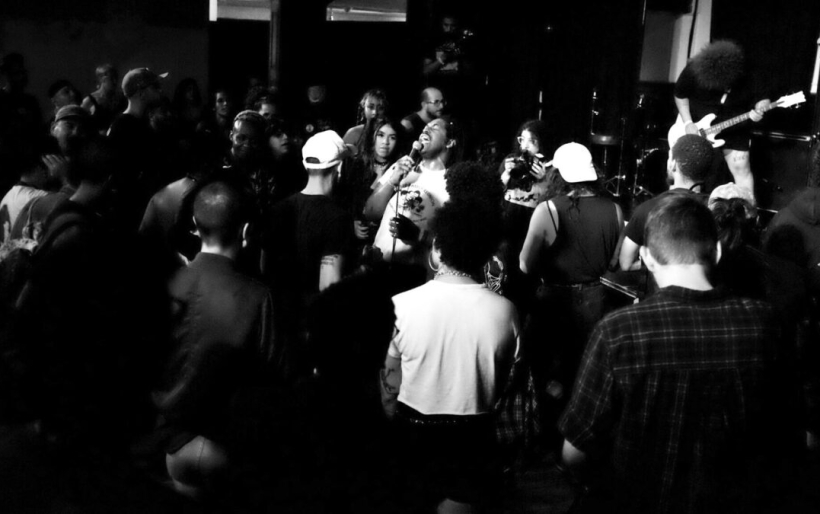 Watch Soul Glo’s trippy meta-video for “29,” see them at the First Unitarian Church with Armand Hammer

Philly four-piece Soul Glo released its first-ever music video this week, setting a fast-paced collection of imagery to the song “29” from 2020’s Songs to Yeet At The Sun EP. While the chaotic visual aesthetic matches the band’s frenetic, boundary-pushing approach to hardcore punk, it also reflects something Soul Glo isn’t often lauded for: its sense of humor.

As opening footage scans across Philly garages, intersections, and homes backlit by a stunning golden hour sunset, director Gabriel Duque zooms in on the band in a living room, laughing in the midst of a brainstorming session about what the video could contain. “Ski masks, knives, cool colors and shit,” laughs frontperson Pierce Jordan.

We then go on to see, more or less, what Jordan describes, as a person wearing a mask overtop another mask is at a kitchen table, running a fork and knife across a plate of pills that turns to bills; soon we’re out on a hallucinatory journey in the city, where our main character finds themselves falling over at the foot of one of the lightsaber-like structures on North Broad Street. “…and scene!”

The “29” video pokes fun at the idea of music videos while also acknowledging that, hey, this isn’t easy. As Jordan told Brooklyn Vegan:

“Basically it’s a joke about how much effort goes into music videos when there’s no coherent ideas about what the artist is trying to say. Making a video is so fucking hard. It can be easy to make some simple shit look cool, but a lot of the time, making something look good takes SO MUCH effort. This is our third attempt making one, even though it’s the first of ours you’re seeing. So it’s weird and kinda funny when you sit and watch hours of videos on YouTube and you slowly realize not very much is happening in many of them.”

Get tickets and more information on the Church show here, and check out Armand Hammer’s full tour dates here.