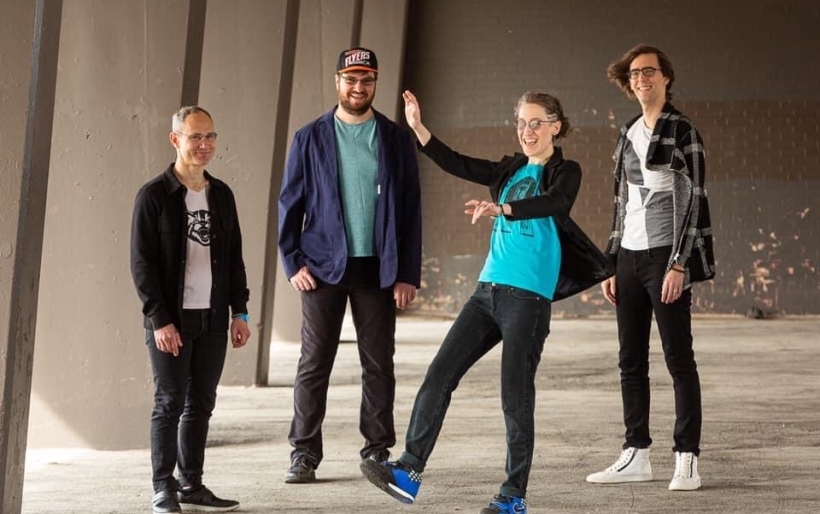 “I do love really avant garde music, but I also love pop music,” says Erica Corbo. “I’m always on a mission to meld the two.”

The Philadelphia pianist, songwriter, and show-curator is talking about Space Whale Orchestra, her long-running free improvisation ensemble that just released a stirring, immersive studio LP called Born Into Beauty on June 4th. A tapestry of horns, clarinet, and piano, the music glides and shape-shifts over 17 tracks that range from a minute-and-a-half conversation between keys and saxophone (“Our eternal laughter”) to eleven-minute full-band rhythmic builds (“Pulse Flow”). The project has been active in Philly for ten years running — with various players chasing side pursuits, like Corbo’s I, America solo LP from 2017 and saxophonist Steve Davit’s role in the electropop outfit Marian Hill — and over time has reshaped its approach and sound, not unlike one of the unpredictable pieces on the album.

While Corbo embraces the unpredictability, she doesn’t want Space Whale to be seen as unapproachable. “A lot of people, when they think of this kind of music, they’re always presented with a 20-minute long piece,” she says. “Not everyone, especially people not used to listening to music like this, is going to want to listen to something that long.” So with Space Whale, they vary up pace, presenting lots of short and digestible bits of music in addition to excursions to the outer realm — it can get weird, but always returns to a place of warmth and harmony.

Corbo’s musical path has gone from high school band to teenage jam-rock projects with friends, to jazz electives at Drexel while pursuing a BFA in photography. A free improvisation class with the late Dr. Myron Moss is where Corbo connected with Davit and Space Whale trombonist Connor Przybyszewski — Davit also played with Corbo in a fusion band called Touch — and after graduating, their professor let them keep attending class to sharpen their improvisation skills.

“He was amazing in encouraging us to explore,” Corbo says of Moss. “We would do a lot of exercises. We would practice playing with the lights off, so we could get really crazy and not feel embarrassed. We would do atonal stuff. Basically, anything we would want to work on, he would encourage us to work on it, and we would always listen back [to our sessions] and analyze what we did.”

As a visual art student, Corbo was used to the idea of peer review and self-critique; she found a lot of musicians in her circle weren’t as open to recording and reviewing their sets, but having Davit and Przybyszewski in that comfort zone helped solidify their creative bond. “[It] really shaped my way of thinking about music and my way and my way of thinking about improvising,” Corbo says.

Around the same time, Corbo was studying piano with Farid Barron of Sun Ra Arkestra — another local ensemble she reveres for its ability to bridge the avant-garde with the accessible — and he encouraged her to start writing more intentionally. “He was generally trying to help me find my purpose in music,” Corbo says. “I wasn’t a professional musician at the time. I was cleaning houses. And I kind of wasn’t sure if I wanted to go back to school for music, or if I wanted to do music as a hobby or full time, he was encouraging me to do it full time, and he encouraged me to start writing. And once I started, I found I kept writing more songs.”

This body of work became I, America, a playful and elegant record released on Corbo’s 30th birthday; she says working on that project was informed by the exercises she undertook with her Space Whale Orchestra bandmates, but also informed how she approached Space Whale moving forward, which was moving in different phases of its own.

“Eventually the teacher was like okay, you guys have graduated a few years ago, you can’t really just keep coming to class,” Corbo laughs. “Steve, at the time, was the manager of the group, he wanted to keep it going, so we started practicing outside of class as our own little group.”

For a while, Davit ran the group as an open collective. Some practices and gigs would have three musicians, some would have up to ten, all with different skill levels and personalities. Corbo calls it a “formative and helpful” experience, but eventually Space Whale Orchestra solidified into its current quartet configuration with clarinetist Mick Ricereto, who the band connected with at an Impermanent Society of Philadelphia event, where musicians and dancers improvised alongside one another. “He just really fit in with us,” Corbo says.

Davit’s role in Marian Hill picked up around 2014, when the band started developing buzz and landing on Festival lineups like Made in America and Firefly. “It’s such a funny twist of events for him,” Corbo says. “I mean, it’s a good course of events, because he’s good friends with Jeremy [Lloyd] and Sam [Gongol], because they all went to high school together. But it’s just so funny thinking of Steve up on all those big stages.”

When they got together in 2019 at Fishtown’s Hi5 Studio, Space Whale Orchestra went in with the mindset of making an album that was approachable for listeners while remaining challenging for them. They worked a lot on what Corbo calls “compositional improvisation.” This basically means that, although the players often start it out cold and without a shape in mind for the piece, they become aware of a potential shape as they play and improvise in its direction.

And sometimes, they do give themselves cues towards a shape and direction. Returning to exercises they retained from their Drexel days and guidance from Davit, they’d decide to improvise a piece that starts slow and quiet and ends loud and fast. They’d plan pieces with three movements, where there must be a defined silence before the next movement. They’d plan pieces where some instruments sit way, way back.

“One thing that’s really difficult to do when you’re improvising in a group is to let there be silences,” Corbo says. “Or to let the piece break down to solos, duos, trios, and not have everyone playing all the time.”

One of Corbo’s favorite exercises with Space Whale is called “copy / respond,” and it results in another piece in three movements. It begins on a section of improvisation, and moves to two sections where the musicians try to repeat everything they just improvised, and then embellish upon it. “Which is really hard, and it’s an amazing exercise to make you a better improviser!” Corbo says. “Most people don’t remember what they just played.”

Some pieces on Born Into Beauty are the result of predetermined time limits — a rule that they only play for, say, three minutes, and then stop. Some pieces are based on graphic scores, which instead of notes on a staff, are pages of shapes that imply different sounds, and it’s up to the musicians to interpret how to translate them into music. None of the album’s pieces had a pre-determined key, leaving the musicians open to playing whatever notes are speaking to them. It sounds stressful, but Corbo says it’s the exact opposite.

“Free improv is the most fun and relaxing and easy music for  me,” she says. “I’m always down to do it, and I don’t feel like I need to rehearse to know that I can do it amazingly. Whereas when I’m playing precomposed music, even if it’s my own, I’m like ‘my god, I better review these songs, who knows if I’m going to make a mistake?’ And those skills for free imropv really help you play composed music as well, because if you do make a mistake, since you’re an improviser, you can always figure out a way to keep the song going.”

Still, with Born Into Beauty, Space Whale wanted to keep the idea of demystifying what they do front of mind. “We released a single,” Corbo says. “Which, it’s weird to think of singles in this kind of music…but I feel like more people would like [free improv] if they didn’t think it was undigestible.”

To help create touch points for listeners, whatever their comfort level, the band used more evocative song titles than they had in the past, taking abstract quotes from poems by TS Eliot and Dylan Thomas and matching them to the songs they seemed to most resonate with.

“I hate titling pieces,” Corbo says. “But in past, we titled with the time, or the length of the piece…and it was so sterile. So this time we went through some of my favorite poems, pulled out a bunch of options, and as a group intuitively matched them up.” It was the perfect approach, she says, because taking “beautiful lines of poetry that evoked some feeling” is a great way to underscore the emotional impact each piece has.

Corbo laughs at the memory of her grandmother’s reaction to an early Space Whale recording — “Are they done tuning yet?” She acknowledges that, growing up with a dad who loved free jazz, she had a head start on experiencing this more more freewheeling sort of music. But she also points out that it’s not as outside-the-box as folks might think. Have you listened to film scores? Watched indie films?

“[This] can be cinematic. I do love free jazz but some of the blaring free jazz is grating to me,” Corbo says. “I think when I was a kid, I shied away from John Coltrane because it was too intense. So I enjoy our own way, our relaxed, restrained way of doing it.”

Space Whale Orchestra celebrates the release of Born Into Beauty on Thursday, June 17th at Suzuki Piano Studio, 601 S. 47th Street, during the June installment Corbo’s Warp Factor 9 concert series. Get more information here, listen to the album below, and grab a download on Bandcamp.