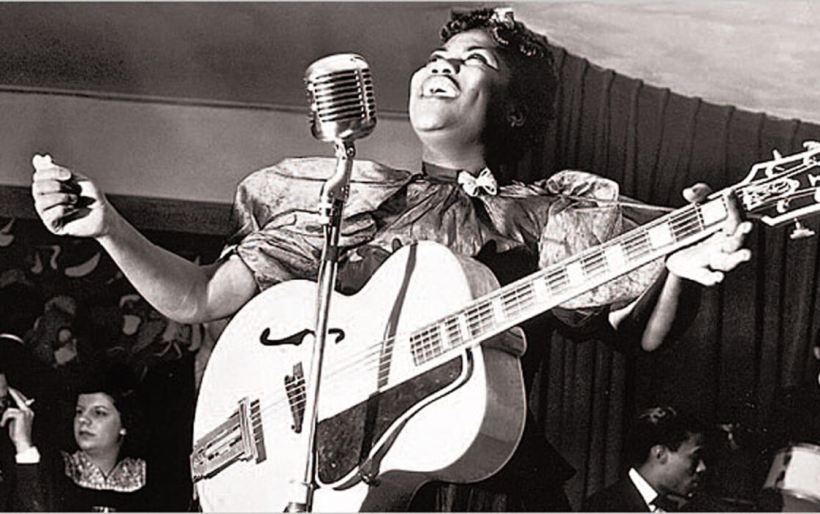 Black Music City is a collaboration between WXPN, WRTI, and REC Philly celebrating Philadelphia’s Black music history and looking to its future with a series of grant-funded projects. This month on The Key, we’ll be highlighting several Black Music City grantees, continuing today with singer-songwriter Erin Dillard, aka emospacebird..

Erin Dillard has an eclectic ear and an adventurous approach to songwriting in her project emospacebird., and she’s always open to hearing new music — as well as new-to-her music. Last year, the Philadelphia-via-St. Louis artist discovered one of the foundational artists of 20th century pop music, blues guitarist and rock and roll pioneer Sister Rosetta Tharpe, and it floored her.

Dillard took in every piece of Sister Rosetta media she could find, and when it came time to develop a project idea for Black Music City, she knew exactly what she wanted to do. Dillard recorded her own cover of Tharpe’s classic “Didn’t It Rain,” and produced a video for the song paying homage to the songwriter and her story. These will be unveiled on Juneteenth during the Black Music City closing ceremonies.

I caught up with Dillard via phone to talk about the journey of emospacebird., the supportive nature of the Philly scene, and the transformative experience of hearing Sister Rosetta Tharpe’s music for the first time.

The Key: You grew up in St. Louis, then moved to Philly; how did changing location impact the music you were writing?

Erin Dillard: I moved from St Louis two hours away to a small town called Columbia, Missouri, and that’s when I actually started playing shows. I’d moved with a friend, and two years ago I was still playing uke, some guitar, I’d been playing piano since I was nine. But I wanted to expand my sound, and everything just came together [when I moved] here.

I went to work at the piano bar in Philly at the end of 2019, and at that paino bar, you had to learn every instrument very well. So if you learn, I don’t know, “Walking on Sunshine” on piano, you have to learn it on guitar, you have to learn it on drums and bass. So that prepped me, and once the pandemic happened, I had a full length still in the works, and got it together. I was like “wow, I’m going to buy a drumkit, I’m going to get my friend’s old bass. I already have a keyboard. I’m going to add some layers.” And I’d already been playing shows in Philly, just with my uke – The Fire, House of Yarga, Ortlieb’s – Philly has just been welcoming for incoming musicians and up-and-coming musicians, it’s great music scene.

TK: Can you talk about what you’re doing to celebrate Sister Rosetta Tharpe for Black Music City?

ED: My project is a song and video piece. I did “Didn’t Rain,” and Sister Rosetta, obviously she was a very spiritual woman, and when she moved to Philly, she was very prominent in the church in Mt. Airy. I wanted to play on that, I didn’t want to do any of her secular songs. She also went on to sing that song in England for the first time, she played in an abandoned train station. There’s something powerful about the lyrics, and it’s also an old negro spiritual, something I found out too, so it was just the perfect song for me. I loved the way it sounded, I loved the way she played on it, and I wanted to do my own emospacebird take on it.

TK: You mentioned it’s a video piece: what will that component look like?

ED: Sure! It’s just my recreation…when I did research on her, at the time it wasn’t exactly okay to be queer. But I had read that she had went on the road with another woman, and it was said they had a romantic relationship. So I kind of see the Sapphic queerness in her, and I wanted to do my take on her style but still add both feminine and masculine traits in it, but still keep it for the time. I wear similar clothes to what she would wear, and I try to emulate that, and her style and the way she moves, and I can only hope I did it justice.

TK: When did you first experience Sister Rosetta Tharpe’s music?

ED: I first heard Sister Rosetta Tharpe’s music in 2020! I had never heard her before, that is wild. I went on a full binge, watching old videos, documentaries. You always hear about old rock pioneers like Chuck Berry and Elvis Presley. Which is cool. But yeah, I’m like “this queer black woman was out here shredding on guitar and no one told me?! That is insane.” I wish I had known about her a lot sooner, but I’m being honest, only this last year. I’ve been obsessed ever since though.

TK: That’s definitely something I remember — last year, during the Black Lives Matter protests, there were a lot of memes going around about Black culture that everybody should know about. And one them about Sister Rosetta said “rock and roll was started by a queer black woman.”

ED: The funny part is I feel like a lot of people would consider that a controversial statement. But when you think about the names I named, a lot of them weren’t even alive yet. Elvis was probably a baby when she was playing shows. When I think of rock and roll nowadays, the first name that pops into my mind is Sister Rosetta Tharpe.

Watch emospacebird.’s cover of “Didn’t It Rain” and tribute to Sister Rosetta Tharpe at the Black Music City closing ceremony, streaming on Facebook Live on Saturday, June 19th at 12:30 p.m.