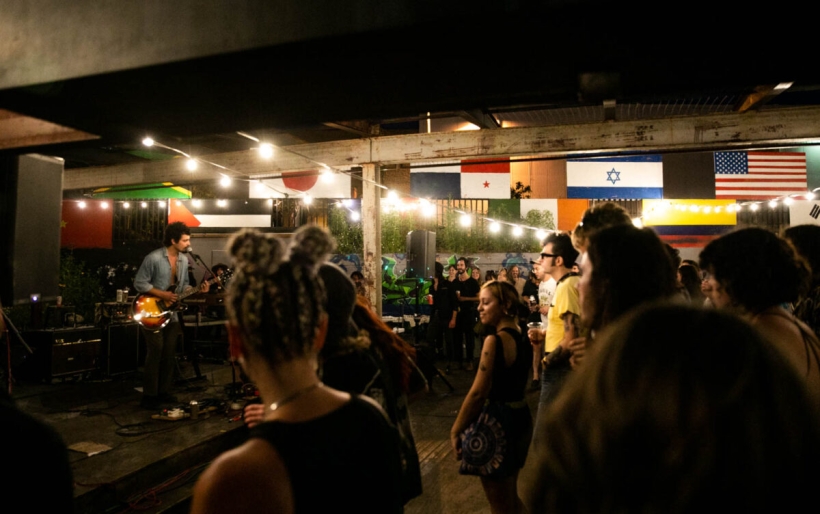 “This is the point of the show where we play a game called ‘What’s Ali saying?'”

We were about 45 minutes into a barnstorming Sunflower set by Philly rocker Ali Awan and he was, as the saying goes, in the zone. It was definitely a bit of self-depricating humor on his part — we never, at any point, had any problem comprehending him — but also an indicator that, as good as it felt to chat, he and his band were there to play music for the friendly faces filling the dancefloor at this thrice sold out show.

The gig was a release party for Awan’s new Moon Mode EP, out last week on Born Losers Records, and with his bandmates Keaton Thandi on drums and Johnny Mick on bass, alongside guests Sean Hur (of Ruby The Hatchet) rocking some immersive keyboard tones, and Dan Rice (of The Dawn Drapes) chipping in on rhythm guitar, the new songs sounded huge.

“Cherry Pits” flowed dreamily out of one song and into another (this gig was big on the medleys, to keep the music moving) while “Climb,” a highlight from the new EP, made for an emphatic midtempo rock-out moment. Back-catalog cuts like “Pick Me Up” and “Beyond The Valley” got the crowd tentatively moving inwards from the wings — social cues remain uncertain after a year-plus in isolation — but by the time Awan and his band were ripping through the expansive title track to Moon Mode, the party atmosphere were in full swing and the band was locked in and raising spirits in a big way.

Opening the show were two roots-rock leaning artists. Hey Slow played an early set as the crowd was making its way into Sunflower Philly, and while this reporter sadly did not arrive early enough to see them — sorry, Zachary et al — they recently made a lovely appearance on the Unprecedented Sessions I encourage you to watch. That said, it was hard to miss Cosmic Guilt, the massive new project led by Scantron and Low Cut Connie’s James Everhart that numbered 11 or 12 members crowding the Sunflower stage.

It was the band’s first proper performance, and their radiant music drew heavily on the psychedelic country of Gram Parsons and The Grateful Dead, with strong vocal contributions from Ruby The Hatchet’s Jillian Taylor, as well as singer-songwriter Hannah Taylor (no relation, though Everhart did jokingly call them “the Taylor sisters”). They have two singles out now (listen here) with an album on the way later this summer.

Below, check out photos of the show by Rachel Del Sordo.