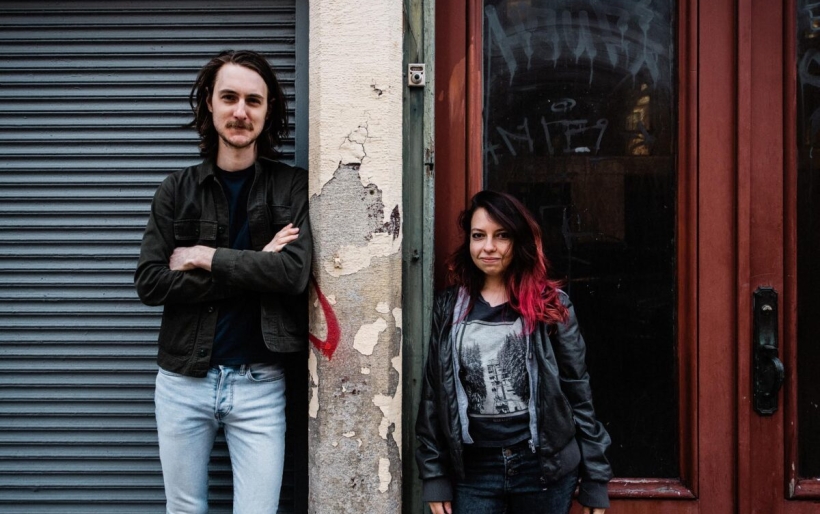 Amid the sticky city heat, snow days seem like nothing but a dream. However, Annalise Curtin and Philippe Goulet Coulombe (Philippe Gc) released an icy new track this week called “Snowland.” The song is the product of a long-distance collaboration between the two, with Curtin in Philadelphia and Coulombe in Montreal.

Having prophetic visions of a future that seems like something only Orwell could come up with, the track is full of unease. A breathless intensity cloaks the whole ordeal as Curtin warbles about an apocalyptic America. Her strong vibrato and Coulombe’s Eliminator-era ZZ-Top guitar work seem to be foreshadowing inevitable doom. Freezing and fierce the duo makes the distance completely irrelevant as their undeniable chemistry is automatically evident

You can listen to the track and read a brief interview with Curtin below.

The Key: How did the collaboration between you and Philippe Goulet Coulombe come about? Have you worked together previously?

Annalise Curtin: We met sporadically through the Philly music scene but met up more frequently the month prior to the pandemic attending each other’s shows and bonding over our shared love of the Beatles. Once the lockdown started, I actually assumed that we wouldn’t speak again since he moved back to Quebec. A couple of weeks in, Phil reached out over text asking me if I would be interested in helping him revisit a song of his he wrote about 10 years ago, which originally had French lyrics to it. He recorded the guitar part on his phone and sent it to me to add some new lyrics. After going back and forth a bit we ended up with a bit of a quarantine lullaby. It felt easy and natural to write together so it was exciting to write these songs and inspiration struck to try to write in a totally new direction. This is how Snowland came to be.

TK: How did the collaborative process work? What was your workflow like?

AC: It honestly felt easy and seemed to come together quickly. He would come up with melodies, record them on his phone and send them over. From there we would go back and forth about the lyrics for a week and I would record my vocals along to the melody he sent using my recording set up at home.  Personally, when I write music I always am melody first and lyrics second. Since he is such a brilliant guitarist he seemed to have no problem coming up with the melodies and lyrics came to me quite quickly from there. “Snowland” was more 50/50 with the lyrics but the melody was all his. This was the perfect arrangement for me because I tend to write quite slowly on my own because of my limited guitar abilities. So it was exciting to sing to something more intricate. Specifically “Snowland”  started as a multi-track mess (Phil’s words, not mine) recorded at 1 am in a basement. We have a couple more songs but we may revisit them again before moving forward with the final recording.

TK: What were some of your inspirations both lyrically and musically for this track?

AC: ZZ Top, to a certain extent (not melodically for sure), and perhaps the state of the world, feeling slightly apocalyptic.

TK: What did you want this track to encapsulate or explore? Was there a certain feeling you wanted to capture?

AC: The feeling of urgency, to dance until the end of the world. Phil wanted to explore strong Texan blues guitar riffing with a drum machine and full-blown synth backline.

TK: You have an EP in the works as well! How is that? Do you two plan to meet up at some point to work on it or will it also be done completely remote?

AC: Phil has an LP coming out soon and I have a couple of singles of my own that I will be releasing shortly. As we revisit the songs we wrote last year we will have a better idea of whether this will be an EP or an album but more collaborations are on the way for sure. Remote seems to work fine for us, but Phil will plan on hopefully coming down more often once border restrictions are lifted. So time will tell.