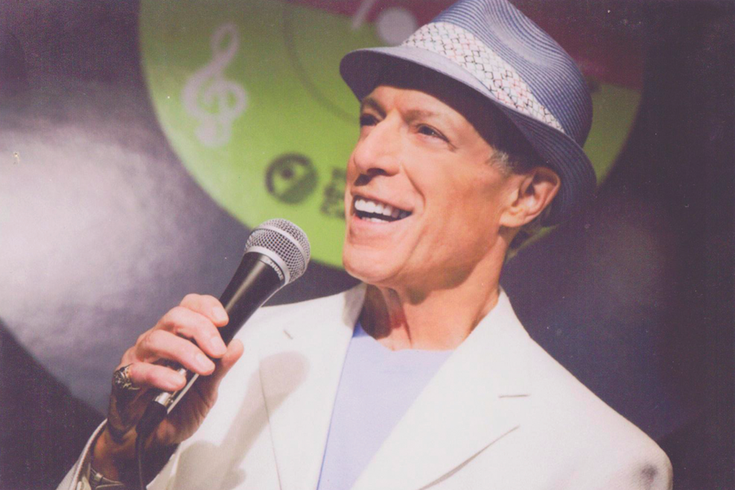 Jerry “The Geator” Blavat | photo courtesy of the artist

When famed Philly disc jockey Jerry “The Geator with the Heater” Blavat held court on WCAM radio in the 1960s, his audience of “yon teenagers” was devoted.

They called the station and made requests for song dedications: very specific dedications, filled with a litany of names and places and inside jokes. The studio’s phone lines often got jammed, and when they couldn’t get through, The Geator’s fans wrote letters. Sometimes those messages made it to the airwaves, and sometimes they stayed in their envelopes. Which is how we arrive at something that WXPN is calling The Lost Dedications.

The hour-long special, airing on Saturday, June 26th at 5 p.m. ET, finds The Geator presented with a box of unopened fan mail from the year 1962. He opens them live on the mic, talks about the letters with host Ben Vaughn, and reminisces about the music and memories they contain.

A couple years back, Vaughn was helping The Geator move out of his longtime office space on Market Street in Philadelphia. Several boxes were being readied for donation to the Rock and Roll Hall of Fame Library in Cleveland, some boxes were simply being organized. In one of the boxes, Vaughn found many of those letters with dedication requests, and he was bowled over — not just by their age, but their content, how personally they addressed The Geator and how openly they shared with him.

And then, in a corner of the box, Vaughn found a bundle of 57-year-old letters that had never been opened. He couldn’t believe it.

“These letters are from his peak as a powerful radio personality in Philadelphia,” Vaughn said when we talked about the project over Zoom. “Think about it: we’re catching him before The Beatles. Kennedy is still alive. It’s insane what we have here.”

He kept the letters untouched, called up The Geator to tell him what he found, and they set to work documenting this musical time capsule.

Speaking over the phone last week, The Geator remembers getting dedication requests vividly. He describes them lighting up the phone lines; “I would say ‘if you couldn’t get through, write to The Geator, tell me what you want, and I’ll get it on for you.'” He remembers answering those requests on the air, and cherishes the freedom he had to do it because his station — broadcasting from Camden at a humble 250 watts on 1320 AM — was free of the “format radio” approach of commercial stations.

But as much as he tried to interacted with all his fans, “I never knew I had this box of letters,” he says. “When [Ben] came to me and showed me these letters, I said to myself, you know how wonderful it was for me at that time to connect to the audience with dedications and letters. They don’t do that today! In radio you don’t make dedications anymore. You don’t write to your favorite disc jockey anymore about the music and how you felt about the music he’s been playing.”

Feeling is very important to The Geator, and that’s something that will come across in The Lost Dedications. “I don’t just play music – music tells a story about life. My audience back then, as the audience of today, identifies with the song. It speaks for the human experience.”

Reflecting on his own experience and childhood connection to The Geator, Vaughn describes himself as a radio fanatic. Growing up in Mount Ephraim, New Jersey, he got his start listening to Philly’s pop stations WIBG and WFIL, and the soul station WDAS. He’d stay up all night, locked in, and one Saturday afternoon, as he arrived home from baseball practice, he caught The Geator’s television show. “I never played baseball again,” he says. “It was rock and roll 101.” Vaughn found himself attending dances hosted by The Geator, connecting with fellow music lovers through The Geator, earning himself a high school nickname (“Ben-a-phonic Ben”) due to his Geator fandom. And in The Lost Dedications, Vaughn paints a picture of teens just like him, their cars parked on the banks of the Delaware river, aerial antennas aloft, trying to get the clearest reception of the signal and vibrations coming from the Tower of Power Clock.

“When we were reading these letters, it was heartfelt,” The Geator says. “These were kids! A lot of these people who are still around are parents, grandparents, have had successful careers. That’s the greatest way to communicate in life, through music. I’ve been very fortunate my entire life to communicate with people I don’t see, that hear my voice, and they know the music I play.”

Tune in to The Lost Dedications on WXPN this Saturday, June 26th, at 5 p.m. ET; tune in in Philly at 88.5 FM on the radio dial, tune in everywhere else streaming at XPN.org.